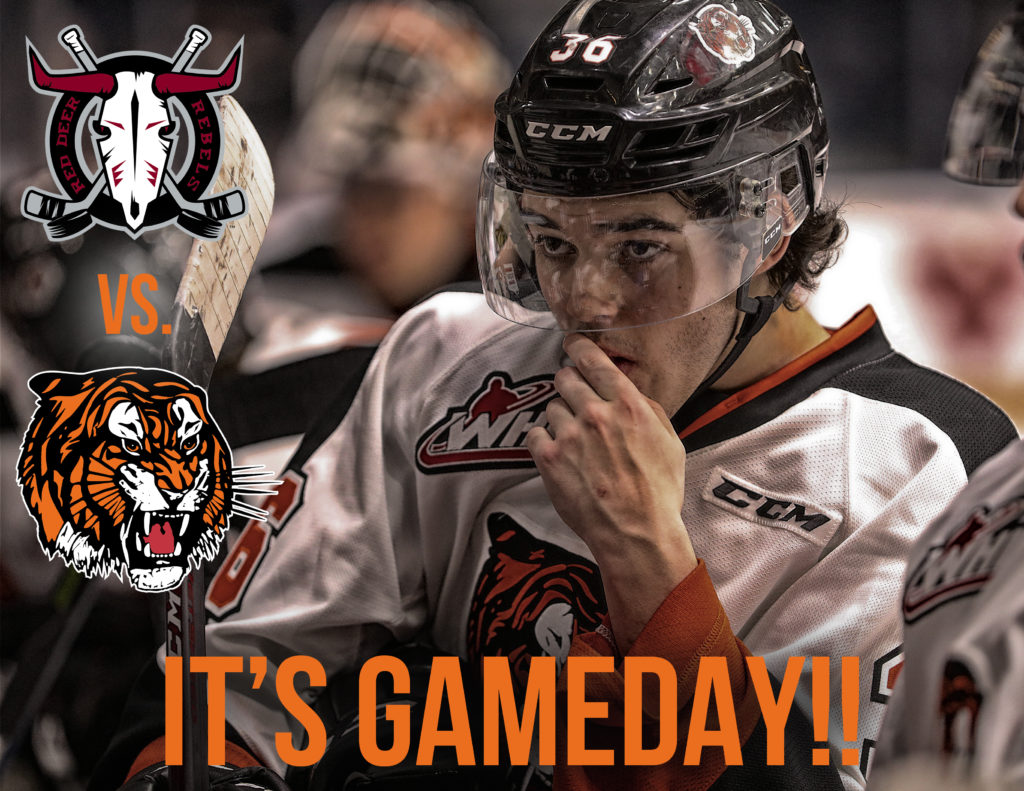 The Medicine Hat Tigers suited up on Saturday for their RE/MAX Presents the WHL Suits Up with Don Cherry to Promote Organ Donation game and they defeated the Brandon Wheat Kings 4-2 in style. Veteran forward Ryan Jevne had a 3 point night (2G, 1A) and he netted his 30th goal of the season as the game-winning goal. Medicine Hat is now 33-26-4-2 and they are led by veteran forwards James Hamblin with 73 points (32G, 41A) and Ryan Jevne with 62 points (30G, 32A).

For the sixth and final time this season, these two Central Division rivals will face off. The Tigers are 5-0-0-0 against the Rebels this season and 12-10-0-1 over the past five years. The last time these two teams met was January 25th, 2019, in Red Deer and the Tigers won 5-3. Elijah Brown had a 2 game night and Bryan Lockner picked up three assists in the victory.

The Red Deer Rebels fell 3-2 to the Edmonton Oil Kings last night. The game was tied 1-1 until the third period when the Oil Kings took the lead. Both of the Rebels’ goals were scored on the power play. Red Deer is now 33-26-4-2 and they are led by Chicago Blackhawks signed prospects Brandon Hagel with 98 points (40G, 58A) and Reese Johnson with 50 points (24G, 26A).

Ryan Jevne has been heating up for the Tigers and he has 7 points (4G, 3A) in the last 3 games. The 20-year-old Edmonton product has been having a banner year for the Tigers setting new career highs with 30 goals and 32 assists in 60 games played. Jevne is an intelligent player with an explosive first step and a hard shot. Look for him to make an impact in tonight’s tilt.

Captain James Hamblin has been the Tigers’ top point producer all season with 73 points (32G, 41A). The Tigers’ former first-round pick from the 2014 bantam draft has suited up for 259 games, scored 78 goals and picked up 110 assists in his career as a Tiger. Hamblin is a speedy, two-way forward who leads the Tigers by example with his hard work and dedication. Look for the Captain to lead the way in tonight’s game.

Salta Gymnastics Club is celebrating their 30th year in the community as a not for a profit sports organization. They have the largest facility in the city, with over 8,000 square feet in their main gym and provide a variety of programs including recreational gymnastics and trampoline classes. Salta also hosts the Salta Achievement Squad which is a demo team that combines gymnastics and dance and performs at various events locally, provincially and internationally. Salta is currently taking registration for their spring session.