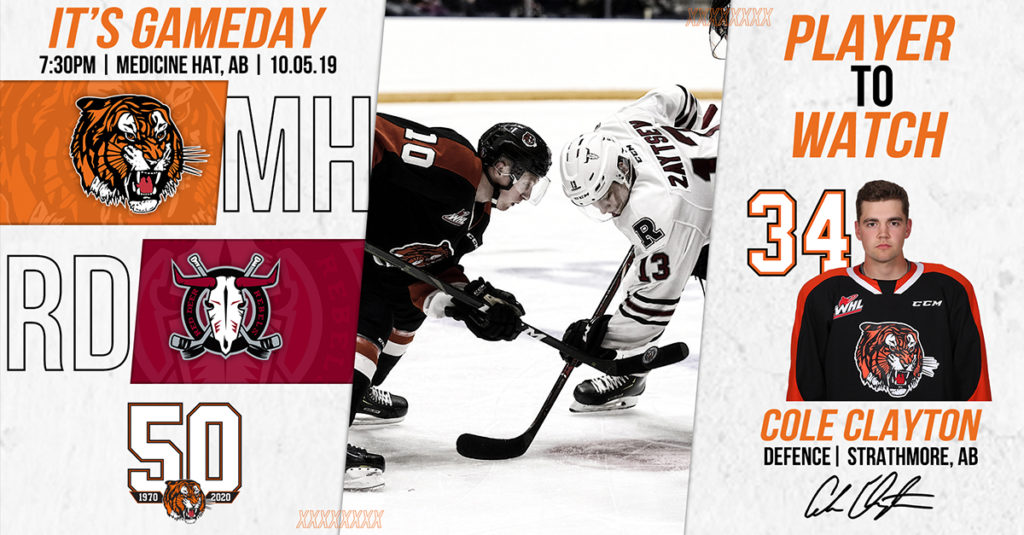 The Medicine Hat Tigers improved their record to 4-2-0-0 after defeating the Regina Pats 6-2 at the Brandt Centre last night. Rookie forward Cole Sillinger (2G, 1A) and veteran Ryan Chyzowski (1G, 2A) combined on three of the Tigers’ six goals. Tonight’s game against the Red Deer Rebels will be the Tabbies’ first of a five game homestand. After tonight, they will host the Portland Winterhawks on Tuesday.

Tonight’s game is the first of six meetings between these two Central Division rivals this season. The Tigers are 13-5-0-0 against the Rebels over the past five years and the last time they met Medicine Hat won 7-4 on March 13, 2019. After tonight’s contest, the Tigers and the Rebels will meet next Saturday, October 12th at the Canalta Centre for the Tigers’ Pink in the Rink game.

The Red Deer Rebels beat the Swift Current Broncos 5-1 in Swift Current last night. Finnish Import Christoffer Sedoff had his first two point game while Keaton Sorensen scored his first career WHL goal in the victory. The Rebels are 3-3-0-0 and they are led by Brett Davis with 6 points (3G, 3A) in 6 games.

Cole Clayton is a very competitive defender that plays hard in all three zones. The 19-year-old Strathmore, AB product has great composure with the puck and sees the ice well. Clayton is fearless and he is not afraid to mix it up or block shots. Although he is primarily a stay at home defenceman, Clayton still contributes offensively by making smart plays.

Captain James Hamblin is a speedy, skilled two-way forward who leads the Tigers with tenacity and hard work. The 20-year-old Edmonton native has 6 points (2G, 4A) in 6 games played so far this season. In his career as a Tigers, the 2014 first round Bantam draft pick has played 267 games, scored 81 goals and picked up 117 assists. Look for Hamblin to make an impact in tonight’s tilt.

The Medicine Hat Army Cadets is a free program for youth aged 12-18 who are interested in participating in a variety of challenging and rewarding activities, and the development of life skills in the areas of teamwork, leadership, and citizenship. Their structured program includes citizenship, leadership, community service, drill, sports, marksmanship, biathlon, survival, music, navigation, radio communication, and outdoor adventure activities.