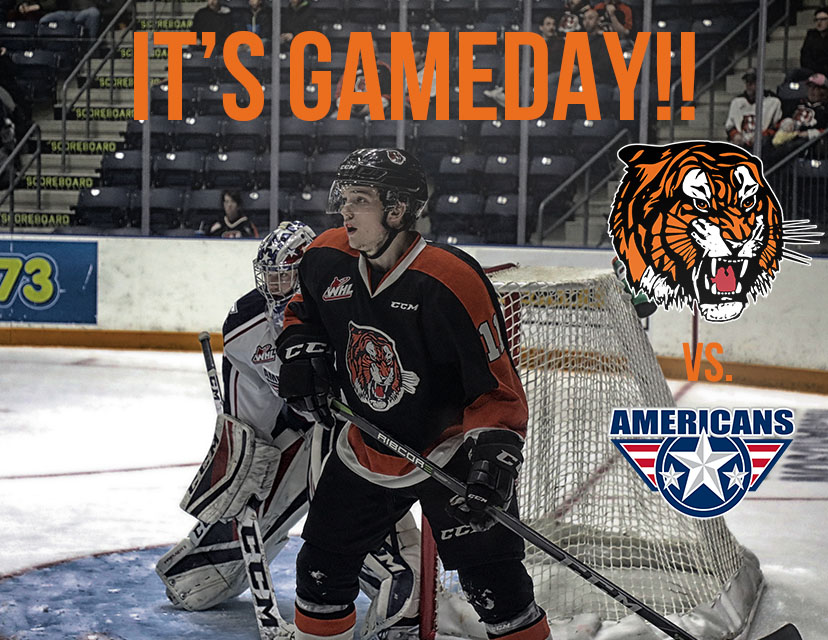 Tonight’s game against the Tri-City Americans marks the second game in a three-game road trip for the Medicine Hat Tigers. Last night the Orange and Black paid a visit to the Spokane Veterans Memorial Arena to do battle with the Chiefs. The Tabbies came out on top in a 3-2 shootout win. After tonight’s contest, the Tigers will visit the Kootenay ICE Monday before returning home to host the Prince George Cougars on Oct 12th.

The Tigers travel to Kennewick, WA for their annual meeting with the Tri-City Americans. The last time the Tigers defeated the Americans was Feb 4, 2017, by a score of 6-5. In the last five years, the Tabbies hold a 2-2-0-1 against the Americans.

The Tri-City Americans hold a 2-1-0-0 record thus far this season and haven’t played since last week’s 3-2 loss to the Everett Silvertips. Leading the way for the Americans are veteran forwards Nolan Yeremko (4G, 2A) and Isaac Johnson (1G, 5A).

Daniel Baker is in his first season with the Orange and Black, however, the 6’3 Edmonton defenceman is no stranger to the league after being called up to play in 11 games last season, including 8 near the end of the season due to injuries. Baker gained valuable experience last season and which has been evident thus far this season as the 17-year-old has been called upon to play big minutes. Baker is a calm, collected player with a great ability to the read the play. Look for Baker to make an impact on the defensive end for the Tigers tonight.

In his fourth season with the team, the Medicine Hat Tigers’ 2014 first round bantam draft pick, James Hamblin, has been selected by his teammates to captain the 49th Edition of the Tigers. The 19-year-old Edmonton product is having his hottest start to a season thus far. In 7 games played, Hamblin has 4 goals and 4 assists and is leading his team as the top point producer. Hamblin is a hard-working, two way forward who leads the team by example with his team first mentality.