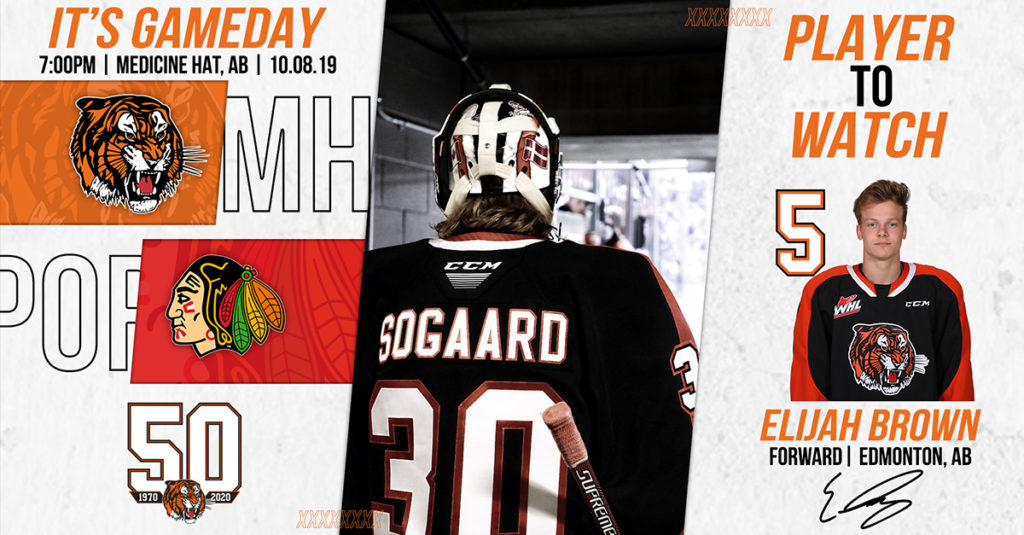 The Medicine Hat Tigers split their weekend after defeating the Regina Pats 6-2 on Friday night, they fell to the Red Deer Rebels 4-3 in overtime on Saturday. The Tigers are 4-2-1-0 and they are currently in 3rd place in the Central Division. Medicine Hat is led by veterans Ryan Chyzowski (4G, 3A), James Hamblin (3G, 4A) and rookie Cole Sillinger (4G, 3A) all with seven points in seven games played.

Tonight’s contest is the annual meeting between these two hockey clubs. The last time the Tigers and the Winterhawks met was February 10th, 2019, when the Tabbies won 2-1 in a shootout. Mads Søgaard stopped 32 of 33 shots faced and all five shooters during the shootout while Ryan Chyzowski scored the game winner. Medicine Hat is 1-2-0-0 against Portland over the past five years.

Tonight’s game will be the Winterhawks’ fourth game of a seven game road trip that they kicked off in Langley, BC against the Vancouver Giants. They are 1-2-0-0 on their road trip and 3-2-0-0 on their season so far. After tonight’s tilt, they will travel to Swift Current, Red Deer and Edmonton before returning home. Portland is led by veterans Johnny Ludvig (3G, 3A) and Jake Gricius (1G, 5A) with six points in five games played.

Elijah Brown is a speedy, skilled forward in his third season with the Orange and Black. The 19-year-old Edmonton product sees the ice well, he is creative and he is not afraid to mix it up. Look for Brown to drive to the net and create scoring opportunities tonight.

Captain James Hamblin is a speedy, skilled two-way forward who leads the Tigers with tenacity and hard work. The 20-year-old Edmonton native has 7 points (3G, 4A) in 7 games played so far this season. In his career as a Tigers, the 2014 first round Bantam draft pick has played 268 games, scored 82 goals and picked up 117 assists. Look for Hamblin to make an impact in tonight’s tilt.