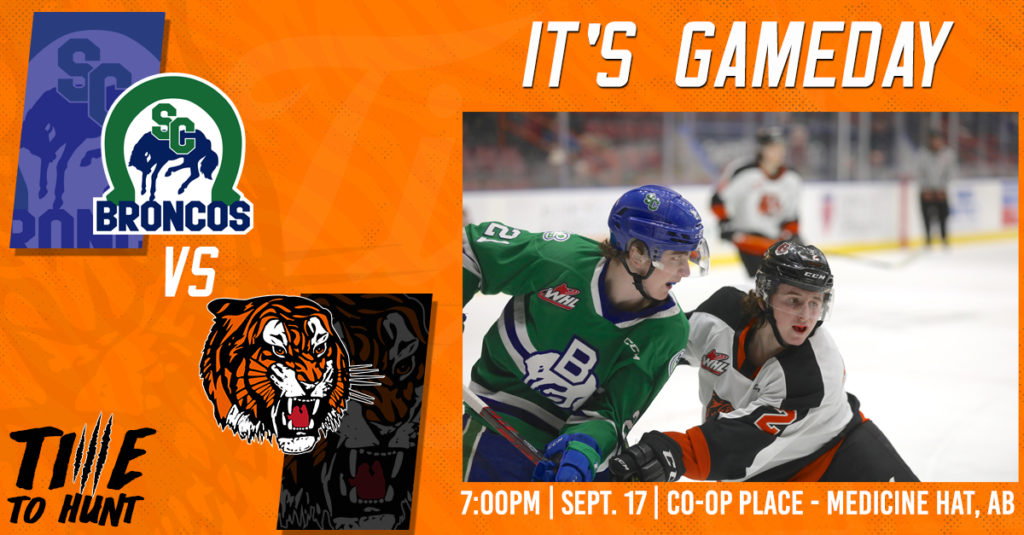 VS SWIFT CURRENT: The Medicine Hat Tigers will be travelling to Swift Current this evening for the first time in the 2022-23 campaign, with a home-and-home against the Broncos to wrap up the pre-season. The Tigers and Broncos should be very familiar with one another, as they tangled eight times last season. The Tigers went 2-6 against Swift Current, with their two victories coming on home ice with a 5-4 overtime victory on October 19th and a 2-0 win on March 5th. The two clubs will once again play each other eight times over the course of the new season, with the first contest coming on Dec. 28th.

VS CENTRAL DIVISION: The Tigers had an 8-31-1-0 record vs Central Division opponents last season.

LAST GAME: After taking their pre-season home opener 5-4 in overtime, the Medicine Hat Tigers travelled to Swift Current for their third of fourth exhibition game. The Tigers got two goals from Andrew Basha, Hunter St. Martin, Oasiz Wiesblatt, Oren Shtrom and Cayden Lindstrom in a 6-3 victory over the Broncos. Dallon Melin and Blake Ekren-Bratton had two helpers apiece and Basha finished with a three-point evening. James Venne got the start in goal, kicking aside 14 of the 17 shots he faced, with Ethan McCallum stopping all 10 shots he was challenged with.

MILESTONES: Forwards Oasiz Wiesblatt needs 13 more games played to reach 100 for his WHL career while Owen MacNeil needs just 19 games to surpass 150 in his WHL career, where his time in the league has been shared between the Spokane Chiefs and Medicine Hat Tigers. Defenceman Dru Krebs needs just 6 games and 7 points to reach 150 games and 50 career points respectively. Forward Dallon Melin who recently joined the Tigers after four seasons spent with the Red Deer Rebels, is 13 games away from reaching 200 games played. Melin garnered his 50th career WHL point with a goal on April 13th against the Calgary Hitmen while he was a member of the Rebels. Forward Brendan Lee is 7 points away from 50 in his WHL career. Goaltender Beckett Langkow needs 19 more games in order to hit 50 on his career.

PLAYER TO WATCH: Owen MacNeil was drafted by the Spokane Chiefs in the second round, 39th overall in the 2018 WHL Prospects Draft. He was acquired by the Tigers on September 14th, 2021. He has played in 132 career Western Hockey League games, amassing 12 goals and 26 assists for 38 points. Last season MacNeil potted nine goals and had 26 points in 64 games with the Tigers and will be counted upon to be a leader for a young Tigers team this season.