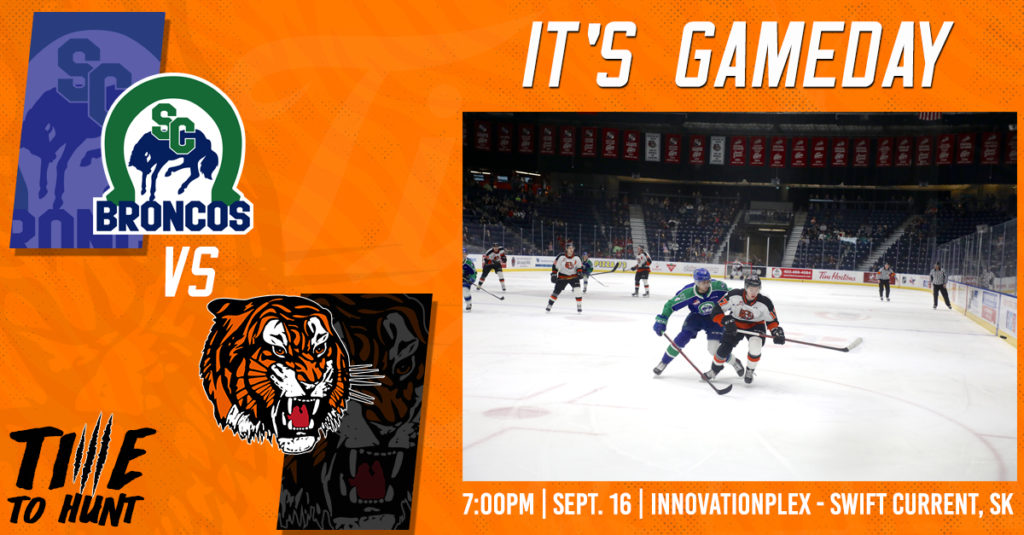 VS SWIFT CURRENT: The Medicine Hat Tigers will be travelling to Swift Current this evening for the first time in the 2022-23 campaign, with a home-and-home against the Broncos to wrap up the pre-season. The Tigers and Broncos should be very familiar with one another, as they tangled eight times last season. The Tigers went 2-6 against Swift Current, with their two victories coming on home ice with a 5-4 overtime victory on October 19th and a 2-0 win on March 5th. The two clubs will once again play each other eight times over the course of the new season, with the first contest coming on Dec. 28th.

VS CENTRAL DIVISION: The Tigers had an 8-31-1-0 record vs Central Division opponents last season.

LAST GAME: After falling 7-3 in their first pre-season contest of the season, the Medicine Hat Tigers took a 5-4 victory over the Lethbridge Hurricanes on Sept. 10. Brendan Lee led the way offensively for the Tigers, scoring a goal and two assists in the game, while Oren Shtrom potted the overtime winner 1:28 into the extra frame. Medicine Hat also got goals from Bogdans Hodass, Gavin McKenna and Hunter St. Martin while goaltenders Ethan McCallum and Jordan Switzer split time in net. McCallum stopped 16 of the 19 shots he faced, while Switzer turned aside nine of 10 shots.

MILESTONES: Forwards Oasiz Wiesblatt needs 13 more games played to reach 100 for his WHL career while Owen MacNeil needs just 19 games to surpass 150 in his WHL career, where his time in the league has been shared between the Spokane Chiefs and Medicine Hat Tigers. Defenceman Dru Krebs needs just 6 games and 7 points to reach 150 games and 50 career points respectively. Forward Dallon Melin who recently joined the Tigers after four seasons spent with the Red Deer Rebels, is 13 games away from reaching 200 games played. Melin garnered his 50th career WHL point with a goal on April 13th against the Calgary Hitmen while he was a member of the Rebels. Forward Brendan Lee is 7 points away from 50 in his WHL career. Goaltender Beckett Langkow needs 19 more games in order to hit 50 on his career.

PLAYER TO WATCH: Tomas Mrsic was the Tigers first round pick in the 2021 WHL Prospects Draft, with the eighth overall selection. The 16-year-old forward managed to get into 10 games last season with the Tabbies, scoring his first career WHL goal. The Surrey, BC native is used to filling the opposition’s net on a regular basis as he scored 41 goals and had 98 points in 28 games with the Delta Hockey Academy U17 Prep team.