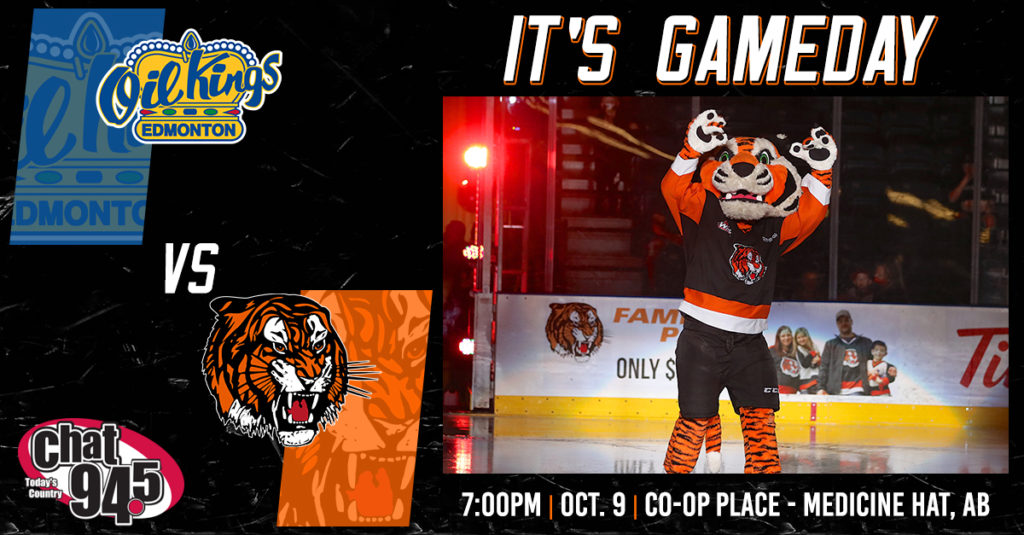 THE STORY COMING IN
The Medicine Hat Tigers got their first win of the season after taking down the Red Deer Rebels by a score of 4-2 in Red Deer last night. Lukas Svejkovsky (PIT) led the way for the Orange & Black notching his first career hat-trick, while Beckett Langkow stopped 30 of 32 shots sent his way to earn his first win of the season. Latvian import Bogdans Hodass scored his first career WHL goal and also chipped in with an assist.

TIGERS VS OIL KINGS
The Tigers and Oil Kings are no strangers with each other having played each other 18 times in the last 5 years with the Oil Kings holding the edge 15-2-0-1. The Tigers powerplay is 2/12 on the season, while the penalty kill has been successful 84.6% of the time. The Oil Kings meanwhile are 3/15 on the PP while killing off 92.9% of their penalties.

EDMONTON OIL KINGS
The Oil Kings are coming off a pair of one goal victories this week which came against Central Division opponents in the Lethbridge Hurricanes and the Swift Current Broncos. First, on Wednesday EOK dispatched the Hurricanes 2-1, then last night in Swift Current Simon Kubicek scored the game winner 2:36 into the third period. Slovakian import Jakub Demek currently leads the Oil Kings in scoring with 5 points (1G, 4A).

WHO TO WATCH – TIGERS
Lukas Svejkovsky’s is off to a torrid start to the 2021-2022 WHL campaign. The Pittsburgh Penguins prospect has five goals through two games, including his first career WHL hat-trick Friday night against the Red Der Rebels.

Bogdans Hodass who hails from Jelgave, Latvia has four points (1G, 3A) through two early contests with the Medicine Hat Tigers. The 6’3 defenceman has been a valuable addition to the Bengals both offensively as well as on the defensive side of things.

WHO TO WATCH – OIL KINGS
Dylan Guenther (ARI – RD 1, 9 OVERALL) and Sebastian Cossa (DET – RD 1, 15 OVERALL) have both been returned to the Edmonton Oil Kings from their respective NHL training Camps. Both players will be looking to keep getting better as this season progresses. Through 81 career games, Guenther, has registered 89 points, including 41 goals and 48 assists. Cossa meanwhile boasts a gawdy 1.93 GAA to go along with a 0.930 SV% through 56 career starts.