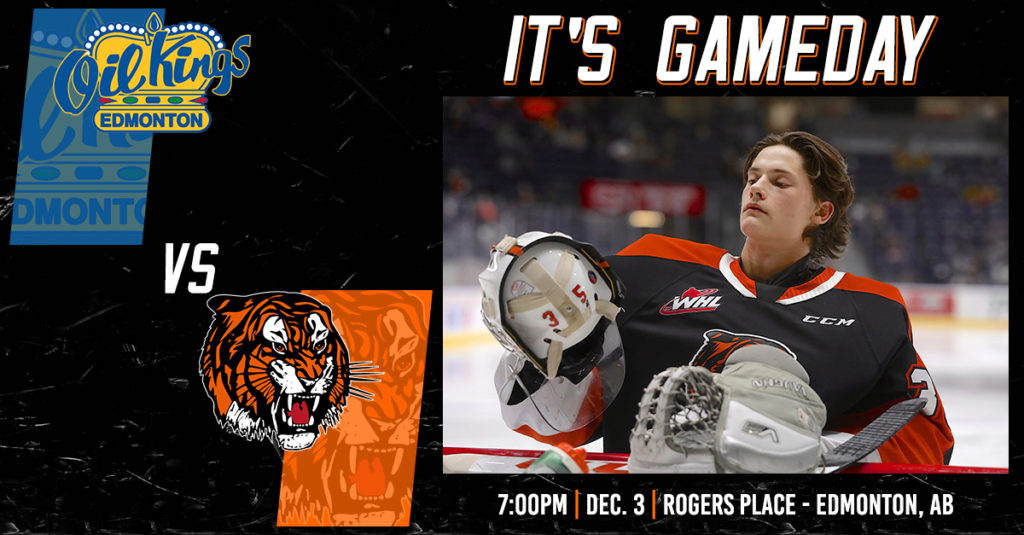 VS EDMONTON: This is third of eight meetings this season between the Oil Kings and the Tigers. So far the series has been dead split with the Tigers winning the first game of the series 3-2 in a shootout, then falling to the Oil Kings in Edmonton by a 5-4 score. The Oil Kings are ranked 1st in the Central Division and 2nd in the Eastern Conference with a record of 16-4-2-1. Leading the way offensively for EOK has been Dylan Guenther (13G, 14A, 27 PTS) and Jalen Luypen (9G, 16A, 25 PTS).

VS CENTRAL DIVISION: The Tigers have posted a 3-6-1-0 record this season vs Central Division opponents.

VS EAST DIVISION: The Tigers have posted a 1-6-2-1 record this season vs East Division opponents.

LAST GAME: The Tigers were in tough against the CHL’s top ranked team in the Winnipeg ICE. Owen MacNeil had his 4th of the season and Cayden Glover got his 3rd goal in two nights as the Tabbies fell by a score of 7-2. Garin Bjorklund stopped 25 of 42 shots in the loss. Jakin Smallwood and Connor McClennon each had a pair of markers for the ICE.

PLAYER TO WATCH: Noah Danielson was a 4th round draft pick (87th overall) of the Tigers in the 2017 WHL Prospect Draft. The 5’9 forward from Red Deer, AB has already set a new career high in goals (5) and in points (10). Danielson plays a complete 200-foot game and sees the ice very well.

TIGERS ROSTER MAKEUP: The Tigers have 24 players on the roster – 2 Goaltenders, 8 Defenceman and 13 Forwards, including 7 rookies.