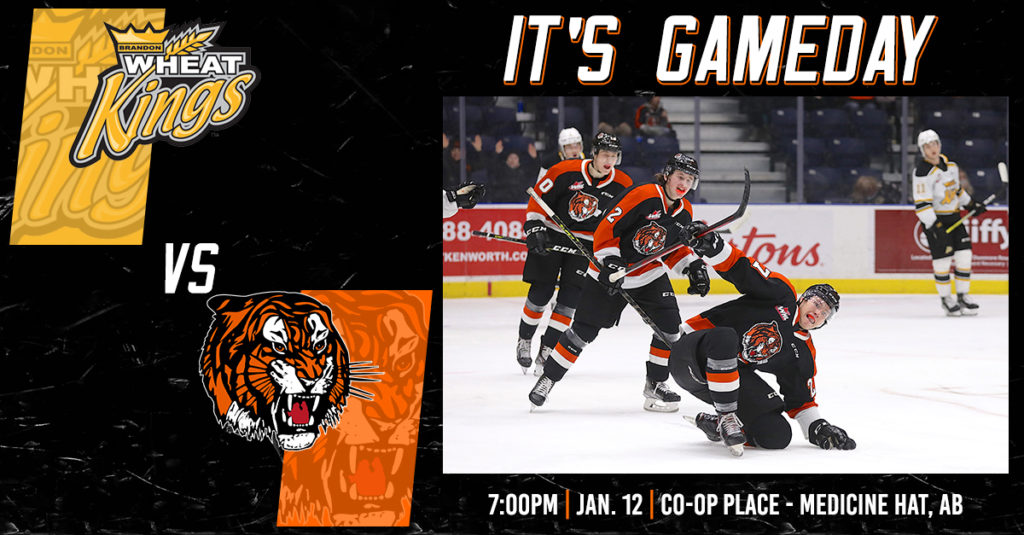 VS BRANDON: This will be the fourth meeting of the season between Brandon and the Medicine Hat Tigers. The Wheat Kings have come away with wins by scores of 7-4, 4-1 and 6-4, with the latter taking place on December 7th in Brandon. Due to provincial restrictions and COVID-19, the Wheat Kings haven’t played a game since December 30th when they lost to the Edmonton Oil Kings in a shootout. Nolan Ritchie leads Brandon in scoring with 37 points (15G, 22A) in 32 games this season. While Ridly Greig 5 goals and 9 assists in 3 matchups vs the Tigers.

LAST GAME: After splitting a home and home series the Medicine Hat Tigers took on the Calgary Hitmen for the third time in a week. The Hitmen scored first, but the Tigers roared back and took a 2-1 lead in the first period on goals from Oren Shtrom (7) and Oasiz Wiesblatt (4). Cru Hanas, an affiliated player from Texas notched his first career WHL point with the primary assist on the Wiesblatt marker. Tigers netminder Garin Bjorklund stopped 34 of 38 shots sent in his direction, but ultimately the Tabbies fell by a score of 4-2.

PLAYER TO WATCH: Noah Danielson is currently tied for the team lead in scoring with Daniel Baker. The 19-year-old from Red Deer, AB has already set career highs this season in goals (8), assists (8), and points (16). Danielson plays a 200-foot game with intensity and speed. The 5-foot-9 forward also has great vision and can snipe with the best of them. Through 84 career games, Danielson has 13 goals and 20 assists.

TIGERS ROSTER MAKEUP: The Tigers have 23 players on the roster – 2 Goaltenders, 8 Defencemen and 13 Forwards, including 6 rookies.