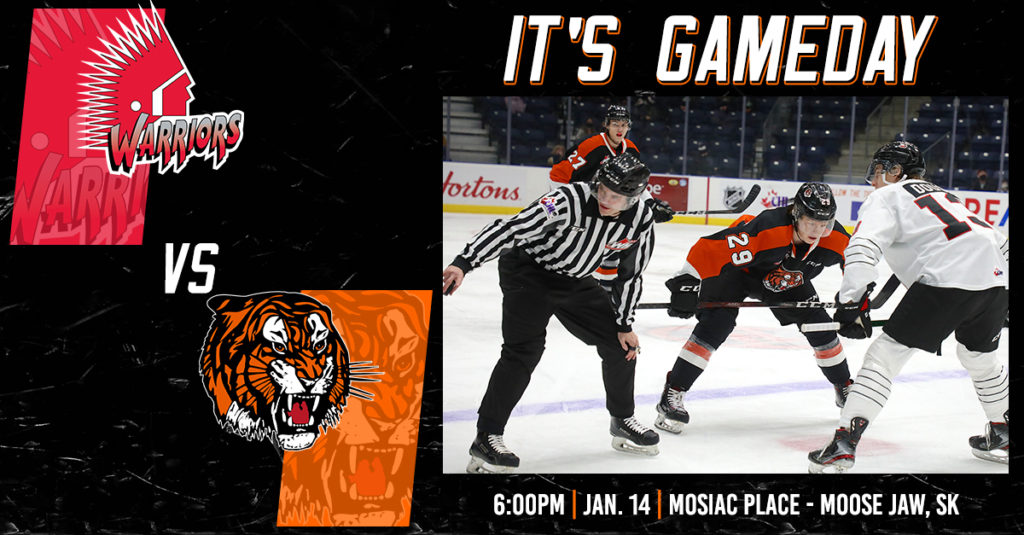 VS MOOSE JAW: This will be the third meeting of the season between Moose Jaw and Medicine Hat. Moose Jaw has come away with the first two games of the season series, both OT wins, with the most recent being back on November 6th in Medicine Hat. The Warriors are currently 2nd in the East Division and 4th in the Eastern Conference with a record of 16-14-3-1. This will be Moose Jaws first game in almost two weeks as some of their schedule was postponed due to COVID-19. The Warriors last game was against the Regina Pats, falling by a 7-6 margin in OT.

LAST GAME: The Tigers return to action was a successful one as they completed the come from behind victory in overtime to take down the Brandon Wheat Kings by a score of 4-3. Ashton Ferster got his 8th goal of the campaign and is now tied the for the lead in team scoring, recent acquisitions Pavel Bocharov (2) and Brendan Lee (6) each scored their first goals donning the Tigers jerseys, and Owen MacNeil (5) had the OT winner. Garin Bjorklund was doing his best human highlight reel impression, stopping 19 of the 22 shots sent his way, earning the win.

PLAYER TO WATCH: Ashton Ferster is currently tied for the team lead in scoring with Noah Danielson and has 8 goals so far this season. The 6’4 forward from Shellbrook, SK has created headaches for opposing goaltenders of late. Ferster has found a home in front of opposing goalies doing what he can to get their eyes off the puck as well as redirecting teammates shots and putting rebounds in the back of the cage.

TIGERS ROSTER MAKEUP: The Tigers have 22 players on the roster – 2 Goaltenders, 7 Defencemen and 13 Forwards, including 5 rookies.