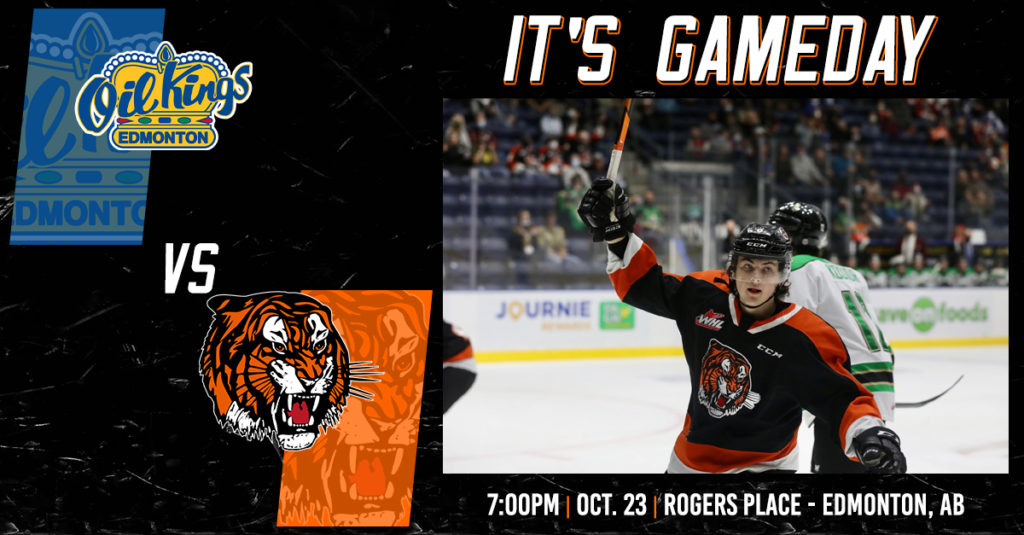 THE STORY COMING IN
The Tigers were 6-2 victors over the Prince Albert Raiders on Friday night, with Oasiz Wiesblatt getting his first of the campaign and rookie Steven Arp notching his first career WHL Goal. The Medicine Hat Tigers kept the special teams rolling and have gotten points in their last three straight games, winning the last two as they head in to Edmonton to once again do battle with the Oil Kings. The Oil Kings once again found themselves in the win column after beating up on the Brandon Wheat Kings 9-2 at Rogers Place.

TIGERS VS OIL KINGS
The last time the Tigers and the Oil Kings met, the Tigers came out on top winning 3-2 in a shootout. Medicine Hat with a record of 4-3-0-1 now sits 3rd in the Central Division and 5th in the Eastern Conference with nine points. The Oil Kings are only two points up on the Orange and Black as they sit 1st in the Central and 3rd in the Eastern Division. The Bengal powerplay has been clicking of late, notching six goals in the last two games with the man advantage. The Tigers have a slight edge in special teams in this matchup sitting at 23.5% (8/34) while the Oil Kings have hit on 18.8% (6/32) of their opportunities.

EDMONTON OIL KINGS
The Edmonton Oil Kings are coming off a huge 9-2 win at the expense of the Brandon Wheat Kings. Jalen Luypen lead the way with a 4 point night, including two goals and two assists. Carter Souch also had a pair, while Jacob Boucher, Dylan Guenther, Logan Dowhaniuk, Jaxsen Wiebe and rookie import Jakub Demek all chipped in with singles. Sebastion Cossa stopped 25 of 27 shots en route to his 5 with of the campaign.

WHO TO WATCH – TIGERS
Gilbert Arizona product Oren Shtrom is starting to find the net with two goals in his last two games and now has four points in seven games this season. In his second season with the Orange and Black the 17 year-old Shtrom is looking to build on his successes and use his skills and creativity to help put goals on the board for the Tigers. With a late birthday Shtrom won’t be eligible until the 2023 NHL Entry Draft.

WHO TO WATCH – OIL KINGS
Jalen Luypen appears to have gotten off the shnide. After being held pointless in five of six games this season, the Chicago Blackhawks prospect blew up the scoresheet Friday night with two goals and two assists. Luypen completed the Gordie Howe hat-trick in the 2nd period after getting in a scap with Brandon’s Jesiah Bennett.