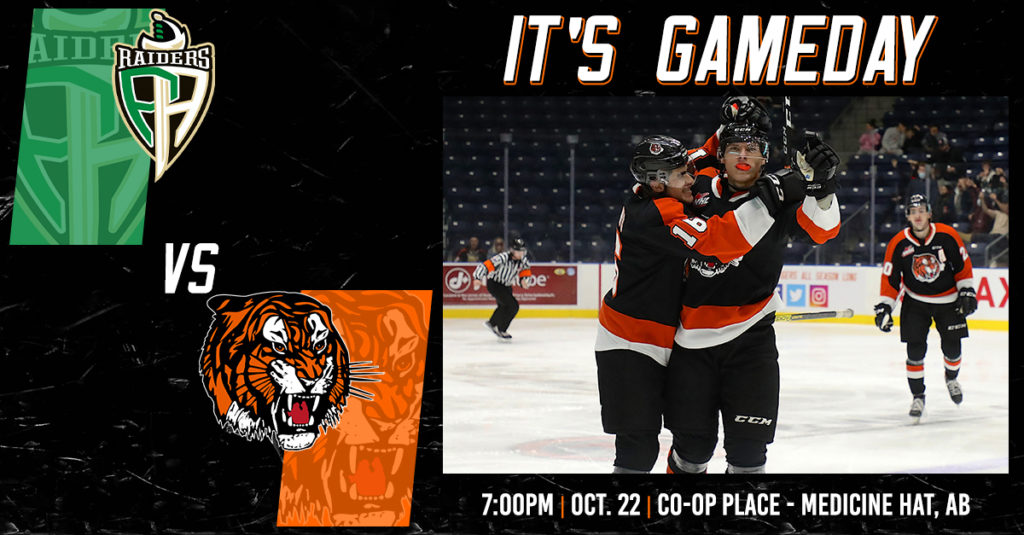 THE STORY COMING IN
The Medicine Hat Tigers look to keep the momentum rolling as they play host to the Prince Albert Raiders Friday night at Co-op Place. The Tigers are coming off a much needed 5-4 overtime win as the Tigers completed the comeback against the Swift Current Broncos. Owen MacNeil scored his first of the season and Corson Hopwo and Teague Patton also notched their first goals of the campaign to help lift the Tigers to victory.

PRINCE ALBERT RAIDERS
This is the Raiders first game since getting the extra point in the shootout with the Tigers last weekend. This is the beginning of a mini 2 game southern Alberta roadtrip that will stop in Medicine Hat tonight, then in Lethbridge to do battle with the Hurricanes on Saturday.

WHO TO WATCH – TIGERS
Oasiz Wiesblatt is highly skilled, creative forward who is currently playing in the top 6 on a line with Owen MacNeil and Ashton Ferster. The 5’8 sparkplug from Calgary, AB has 1 assist on the season, but Oasiz generates opportunities regularly. Look for him to be in the middle of the action all night long.

WHO TO WATCH – RAIDERS
Ozzy Wiesblatt is Oasiz’s older brother and currently leads the Raiders in scoring with 6 points (4G, 2A) through 6 games this season. The elder Wiesblatt has scored in three consecutive games and has only been held off the scoresheet once so far this season. Tonight marks the second time in a week these Ozzy and Oasiz have faced off against each other.