GAVLAS RETURNS HOME TO LIVE CHILDHOOD DREAM OF BEING A HUSKIE 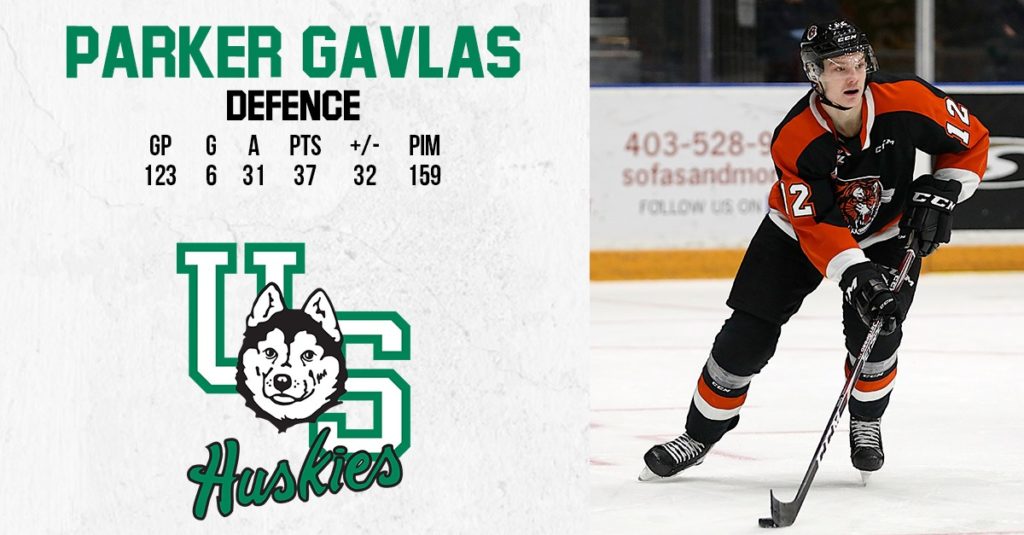 Medicine Hat, AB – The Medicine Hat Tigers’ overage defenceman Parker Gavlas will be returning home next season and living his childhood dream of playing for the University of Saskatchewan Huskies.

“I think it was always a dream of mine to be a Huskie, obviously in my younger years my dream was to be in a volleyball jersey because I was always around the gym and the guys but after finding my own passion for hockey, that dream changed to a hockey jersey,” said Gavlas.

His father, Brian, coached the U of S Men’s Volleyball program for over 15 years. During that time, Brian was able to coach Gavlas’ brother CJ, who has been a setter on the team since 2016. Despite growing up in a volleyball family, Gavlas found a love for hockey.

“Well I think my dad enjoyed getting out of the gym and going to the rink, it was a change of atmosphere for him which he enjoyed a lot and I was never the volleyball type based on my height, my jumping abilities and ‘my hands’ is what my dad would like to say, my brother got those traits. At the end of the day, it was the sport that gave me the most joy and I wasn’t too bad at it either so that was a plus,” said Gavlas.

Gavlas is graduating from the Western Hockey League (WHL) after playing 123 games where he collected 37 points (6G, 31A). He does not consider his route to the WHL as “the norm”.

“I was always an undersized defenceman and I grew a lot during my grade 12. With the help of a couple of old coaches who had ties with the Regina Pats, I got an invite to their camp as a free agent. I remember going there not expecting much because I just signed with the Yorkton Terriers of the SJHL,” said Gavlas. “My plan was to go to their camp just to see where I was at in my game compared to those guys and then go to Yorkton to play there. But I had a decent camp and they asked if I wanted to sign. With everything going on that year with the Memorial Cup even though knowing I probably wouldn’t be playing much I thought it would be a great opportunity for me and my career.”

He signed with the Pats August 30, 2017, and he played eight games for them during the 2017-18 season and three playoff games while playing the bulk of the year with the Yorkton Terriers. The following season, Gavlas played his first full season in the WHL. He started the season with the Pats playing 12 games and collecting one assist before being traded to the Edmonton Oil Kings November 9, 2018. With the Oil Kings, Gavlas played 46 games collecting 10 points (1G, 9A) and added one goal and three assists in 16 games during the 2019 WHL Playoffs.

Before the start of the 2019-20 season, Gavlas was traded to Medicine Hat from Edmonton for a fourth round pick in the 2021 WHL Bantam Draft. During his time with the Tigers, Gavlas quickly made an impact and became a fan favourite on and off the ice.

“Parker is a fierce competitor who lays it on the line every night. His skating ability and competitiveness allow him to play against the other teams’ top players,” said Assistant Coach Joe Frazer.

Gavlas played 57 games for the Tabbies and set career bests in all offensive categories with five goals and 21 assists for 26 points. He was also involved in several of the Tigers’ community events. The impact he made in Medicine Hat was recognized and he was a co-winner of the Cliff Bast Memorial Best Defenceman Award presented by the Medicine Hat Mall with Cole Clayton.

“My time in Medicine Hat was truly memorable for me, right from the start I felt that I was apart of a family and the fans made me feel that way too. Willie, Joe, Smitty, and Sumeet pushed me to not be satisfied with just being okay and turned me into the player I am today. They helped me with so much in my game mentally and physically that I can’t thank them enough. They gave me an opportunity to play my game the way I wanted to play and I think that was the biggest eye opener for me was the ability to be in certain situations I wanted to be in,” said Gavlas. “The group of guys we had in the Hat was truly a special group. I had some big dreams and hopes for our team that were cut short.”

The 2019-20 WHL season ended early due to the COVID-19 pandemic. The Tigers were on a six game winning streak and finished the shortened season in second place in the Central Division with a 41-19-2-1 record.

Looking ahead to the 2020-21 season, Gavlas is looking forward to living at home, being close to his family and pursuing a Bachelor of Education while suiting up for the Huskies.

“I think my family is happy with me staying at home and going to school here, it makes it a little less of a drive for them to watch me play so I think that is a big bonus. But then again having a 21 year old living at home brings its challenges within itself, because I’m sure they liked having their own space while I was gone,” said Gavlas. “But I do think they are very happy with me staying at home and pursuing my hockey career and education.”

The Tigers are grateful for Gavlas’ contribution to their team and their community.

“We want to thank Parker for being a great Tiger both on and off the ice. We wish him nothing but success moving forward with the Huskies,” said Frazer.