GERLACH AMONG THOSE INVITED TO NHL CAMPS 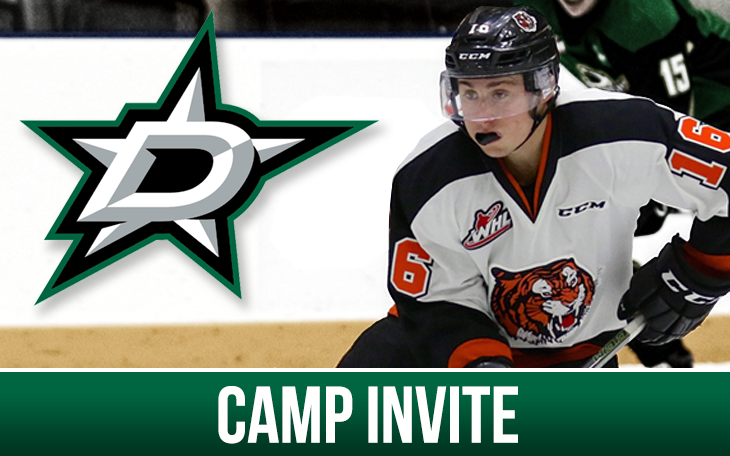 Medicine Hat, AB — While the 2015 National Hockey League Entry Draft has come and gone, NHL interest in Tigers players is just starting to heat up. Professional clubs have gotten savvier in recent years, digging through the rosters of CHL teams searching for the next great untapped – and undrafted – talent.

A handful of Tigers players from the 2015-16 roster had their cell phones go off in the moments after the draft, including Max Gerlach, who was invited to his hometown Dallas Stars development camp.

With a 30 goal rookie campaign, it’s hardly surprising Gerlach would garner somebody’s attention, although going undrafted during the 7 rounds, doesn’t mean much as some of today’s stars were either drafted late or not at all.

Joining Gerlach from the 2015-16 roster is David Quenneville who is off to the New York Islanders Development Camp as a drafted player. Quenneville more than doubled his point total from his rookie season as the Isles took him in the 7th Round, very similar to big brother John.

Matt Bradley had another solid season in the WHL and the Montreal Canadiens draft pick will attend their development camp along with former teammate and St. John’s Ice Caps (AHL) player Markus Eisenschmid. Eisenschmid signed an AHL contract last year playing in 28 games with the pro club.

Between the pipes, Nick Schneider heads off to Calgary’s development camp after he inked an entry level deal earlier last fall, surprising to most as the netminder went undrafted that year. Schneider played in 9 games with the AHL affiliate Stockton Heat to end his 2015-16 campaign, sporting a 4-5-0-0 record and 3.92 GAA as the Heat tried to make a run to the post season.

Also making his way to an NHL development camp is work horse and graduating captain Ty Stanton. Stanton had a great season patrolling the blue line for the Tabbies, recording a career high in points and assists. At the conclusion of the year Ty signed an AHL contract with the Toronto Marlies and appeared in 6 games down the stretch.
Some former Tigers also got the invite to NHL development camps as both former captain Curtis Valk continues to show his skills in Vancouver, joining the Canucks prospects this week. Tyler Lewington, also a former Tigers captain who played in Hershey (AHL) and South Carolina (ECHL) this past season, is in the Washington Captials camp as he was taken in the 7th Round in 2013.

A surprise invite was former goaltender Austin Lotz, as the Manitoba native got a call from his home province Winnipeg Jets to attend their camp. Tiger fans would remember Lotz as he came in a gave 6 stellar performances before a shoulder injury ended his season.

A look at the other former Tigers at camps:

The Tigers wish all those invited a great time with their opportunities and turn them into a full time spot on the NHL roster in the coming years!