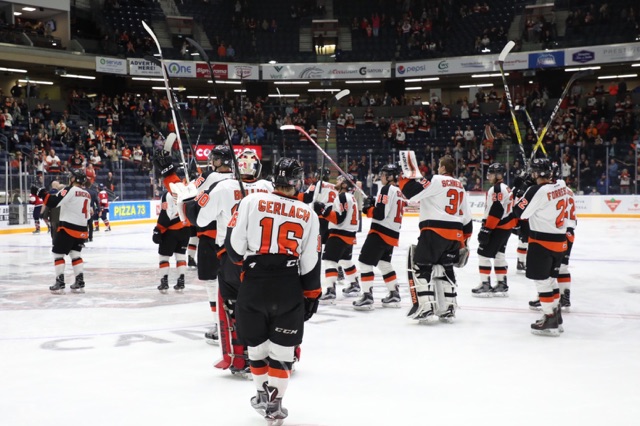 Medicine Hat, AB — It was 26 years ago the Tigers and Hurricanes met in the post season, reaching 7 games. Fast forward and the Tabbies were hosts of another Game 7 in their franchise history, the 12th game overall. Medicine Hat with a wild crowd fed off the energy and found whatever was left in their tanks to attempt to advance to the Eastern Conference Finals against the Regina Pats.

It was a textbook start to the game for the Tigers. All lines were flying so to speak and the Tigers out chanced Lethbridge in the opening minutes. Zach Fischer would opening the scoring with his 7th of the playoffs after stealing a puck from goaltender Stuart Skinner and wrapping it into the open cage. But the goal was short lived with the Canes coming back just 9 seconds later on a 2 on 1 with Jordy Bellerive being the benefactor. Tyler Wong extended their lead with his 10th of the post season and Egor Babenko notched his 7th as Lethbridge stormed back with three unanswered goals heading to the second stanza.

In the second period it was a different Tigers team. Things seemed to be going Medicine Hat’s way, puck bounces, hits, shots on goal, everything tilted towards Skinner. Matt Bradley cut into the lead with his 4th of the post season 4 minutes into the period. Bradley tucked home a puck behind Skinner and a Hurricanes player tapped the puck into his own net. Moments later Mark Rassell netted his 6th of the playoffs baseball style as the veteran forward batted home a puck that deflected off the glass. Rassell would connect again on a power play, getting his stick on a rebound in front of the net for his second of the game and a 4-3 lead going into the third period.

It was a tense final period, like any Game 7 third period should be. Medicine Hat was clenching onto the one goal lead, one of the worst in hockey. Michael Bullion was solid when called upon. Medicine Hat had 2 power plays in the final period to try and extend the lead to 2 goals. Skinner made a couple of good saves on David Quenneville to keep the game close. In the end Lethbridge, despite their lack of chances in the period got the equalizer with under 3 minutes to go. 15 year old Dylan Cozens netted his 2nd of the post season tucking home a puck that squeaked past Bullion and into the net. The goal meant we had overtime, for the second time this post season.

It seemed to be a blessing in disguise for Medicine Hat, a power play in over time, a chance to win the game. The Tigers would work the puck around but couldn’t find the net, sending the black disk wide or just over top the net. A unfortunate breakdown led to a rush by Wong and the Canes. The Lethbridge Captain fired a puck on net, finding the top corner and ultimately ending the Tigers season.

It was a great run to the finish. The Tigers battled hard and fought right to the end. And for that we thank you.

The Tigers season now ends with their awards banquet later this week, check back to tigershockey.com for a recap of all the awards!