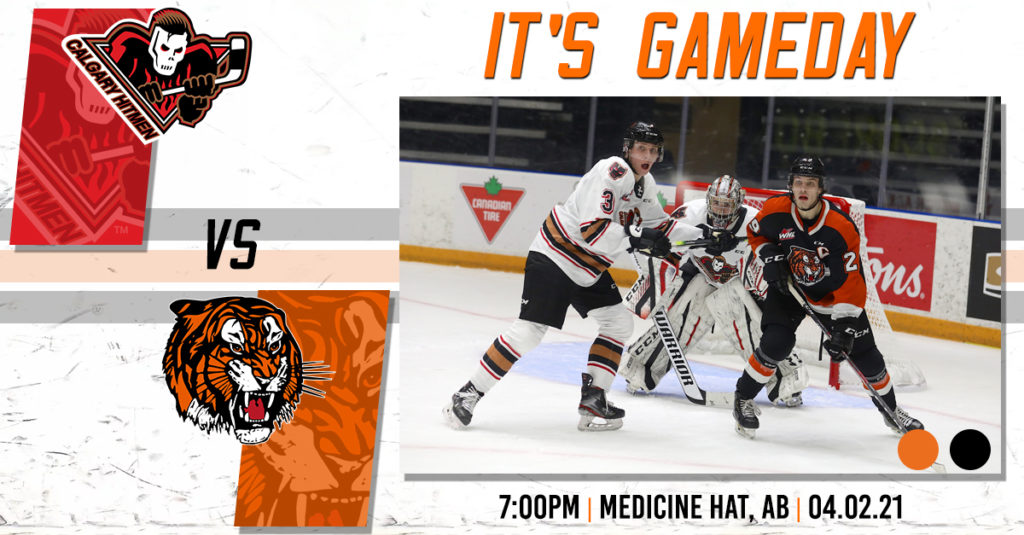 The Story Coming In
The Medicine Hat Tigers are coming off a weekend sweep of the Lethbridge Hurricanes and currently sit in second spot in the Central Division after claiming a 3-0 shutout on Friday, a 6-3 win in Lethbridge on Saturday and 5-4 OT win on Sunday to collect the six points. Leading the way offensively for the Tigers was Captain Ryan Chyzowski who has collected at least a point in each of the Tigers first 10 games of the season and 14 dating back to last season. Tabbies Netminder Garin Bjorklund picked up his first shutout of the season on Friday and improved his record to 5-3 on the season.

The Calgary Hitmen currently sit third in the Central Division after having been the first team to hand the Edmonton Oil Kings a defeat, claiming a 2-1 hard fought win to close out their three game weekend series. Riley Stotts led the offensive charge for the Hitmen registering two goals in three games, including the game winning goal on Sunday.

Tigers vs. Hitmen
This will be the fourth meeting of the season between these two clubs as the Tigers currently hold a 2-1 lead in the season series. The Tigers are currently on a three game winning streak and are 7-3-0-0 in their past 10 games, while the Hitmen are 4-5-1. Medicine Hat’s Powerplay has been electric all season long going 16/41 (39%) which is currently 1st in the Central Division and 2nd in the Western Hockey League to the Prince George Cougars who have only played two games thus far in the young season. The Tigers Penalty Kill has been successful 81.1% of the time which is good enough for 7th in the WHL, while the Hitmen are near the bottom of the table currently in 21st position.

View from Calgary
The Calgary Hitmen are coming off a huge 2-1 win against the Central Division leading Edmonton Oil Kings and have been in five, one goal games so far this season. Josh Prokop leads the Pink and Black attack in scoring with 10 points (4G, 6A) in 11 games. Tyson Galloway sits second with 3 goals and 4 assists, while rookie forward Tristan Zandee is third in team scoring with 1 goal and 6 assists through 11 games. Between the pipes, Brayden Peters is sporting a 3.16 GAA and a .913 SV% with a record of 4-3-0-0.

Tigers Talent
Medicine Hat Tigers defenceman Cole Clayton currently leads the Tabbies in scoring with six goals and 12 assists in 10 games so far in the 2020-2021 campaign. The Tigers overage defenceman is currently tied for second in the Western Hockey League with 18 points. Captain Ryan Chyzowski is averaging 1.5 PPG this season has five goals and 10 assists, while overage forward Brett Kemp is tied for second in team scoring, also averaging 1.5 PPG netting the same five goals and 10 assists as Chyzowski.

Captain’s Corner
Returning to the Tigers for his overage season is first year Captain, Ryan Chyzowski. Chyzowski, a former 1st round bantam draft pick has played his entire career for the Tigers appearing in 267 regular season games for the Orange and Black. Chyzowski crushed his career best totals in 2019-2020, notching 34 goals and adding in 35 helpers for 69 points. Chyzowski is a high energy player with great hands and a dynamite shot.