HOW SWEDE IT IS 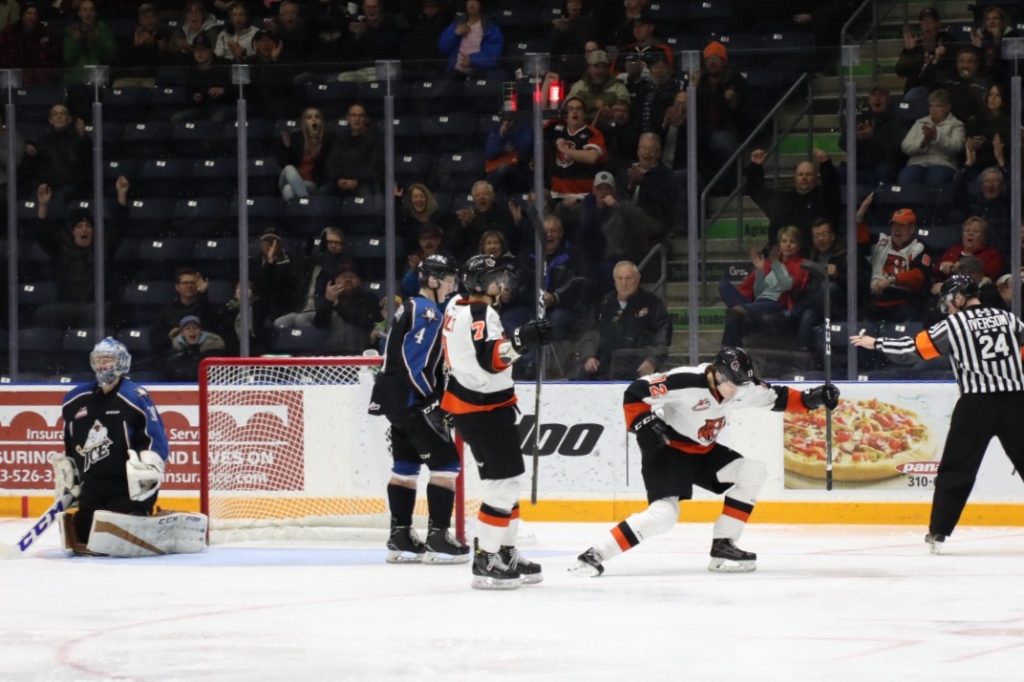 Medicine Hat, AB — Heading into a crucial 4 game in 5 night window with the Lethbridge Hurricanes climbing behind them points against team’s like the Kootenay Ice don’t come easy, especially from a young team looking to improve on their win total. The Tigers were caught with a slow start against the visiting Kootenay Ice on Tuesday night but would manage to dominate the third period to take control of the game and get pucks past Ice starter Peyton Lee.

For Lee and the Ice it initially seemed like the netminder would steal the show and this could end up like one of those games where the goaltender out duels the entire team. But the Kootenay Ice bent and then broke under pressure as the Medicine Hat Tigers put the pressure on. Kootenay opened the scoring in the first period Brett Davis notched his 13th of the season past Nick Schneider who got the start for the Tigers. Davis found a rebound off a side wall shot and put it into the yawning cage. Medicine Hat would be resilient in their attack and Mason Shaw, who left Saturday’s game with a scary facial injury as a skate came up and cut the potential NHL draft pick requiring stitches, scored his 19th goal of the season on the power play to tie everything up at 1 heading into the break.

The second period started with some aggressive play as Mark Rassell challenged Ryan Pouliot to a fight after the Ice defenseman leveled James Hamblin from behind in the corner. Rassell, who was a bit out of his weight class, held his own but most of all showed up for his teammate, something that is always respected by his peers. The Tigers would continue  a parade to the box afterwards and it ended up to bite them. Kootenay would get back to back power play goals as Jake Elmer wristed home his 5th of the season and Davis found his name on the score sheet again for his 14th of the year and just like that it was 3-1 visitors before the midway point in the period. For Schneider he was taken out of the game after the 3rd goal in favor of Michael Bullion. The goaltending switch seemed to give the Tigers a bit of life and realization as they progressed to score back to back goals of their own. Captain Clay would score his 8th of the year from the blue line past a screened Lee and Mark Rassell notched his 22nd on the year with the man advantage as Medicine Hat clawed back to a 3-3 draw after 40 minutes.

Towards the end of the second period Medicine Hat had completely taken over the game, outshooting Kootenay 19-5 in the period and that momentum carried onto the final frame. The Tigers poured it onto the Ice as hard as they could looking for the go ahead goal. Bullion was good when he had to be for Medicine Hat making sure no rebound was left for the Ice to get. But it was big Swede John Dahlstrom who would get on the board for Medicine Hat just 1:42 into the third period with his 23rd of the year. Dahlstrom used a nifty re-direction in front of Lee on a soft point shot from Brad Forrest and gave the Tigers the one goal cushion. After the goal Medicine Hat pressured the Ice but couldn’t find another puck past Lee as Kootenay made a last ditch effort to go to overtime. However fortunately for the Tigers, they were able to hold onto a 4-3 victory.

Medicine Hat will close out the home and home series Wednesday night in Cranbrook before heading south of the border Friday to finish their games against the US Division with dates against Spokane and Tri-City.