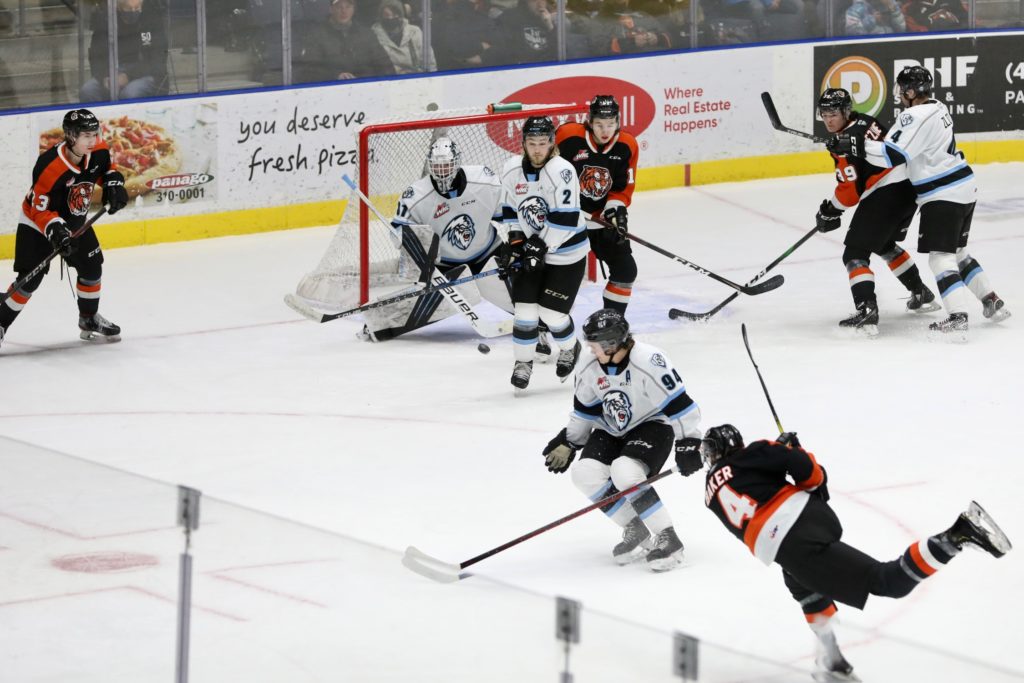 The Tigers welcomed the #1 ranked team in the CHL, the Winnipeg ICE, to Co-op Place on Saturday night. It was the first game between the two this season.

Winnipeg’s high powered offence didn’t waste any time in this game. Zachary Benson put home a rebound in front of the net for his 11th of the season to give the Ice an early one goal lead.

Despite the quick score in the first, it took a while until we saw another. The ICE made it a 2-0 game with under a minute left in the second period. Matthew Savoie sniped home his 11th of the season from the top of the slot.

The ICE would add two more goals back to back midway through the third frame. Jakin Smallwood scored his 10th off a nice pass while on a 2 on 1 at the ten minute mark. Matthew Savoie would make it a four goal game a minute and a half later. His second of the game came off a nice feed from behind the net. Despite the four goal deficit, the Tigers kept battling hard and spoiled the shutout with 4:37 reminaing in the game. Teague Patton came from behind the net to put away the rebound off Carlin Dezainde’s shot. Tyler MacKenzie found the scoresheet with the secondary assist. The Tigers weren’t done there either. Owen MacNeil made it a 4-2 game with his third of the season. He intercepted a puck in the offensive zone and sniped a wrister top corner. Despite their late push, that was as close as they would get as the game ended 4-2.

Garin Bjorklund (2-7-2-0) got the start in net for the Tigers. He made 28 saves including a couple of highlight reel saves.

The Tigers’ next game is Tuesday, November 23rd when the Tigers host the Regina Pats at Co-op Place. Game time is 7:00 (MST) and tickets are available online at tixx.ca.