ICE PULL AWAY FROM TIGERS IN HOME LOSS 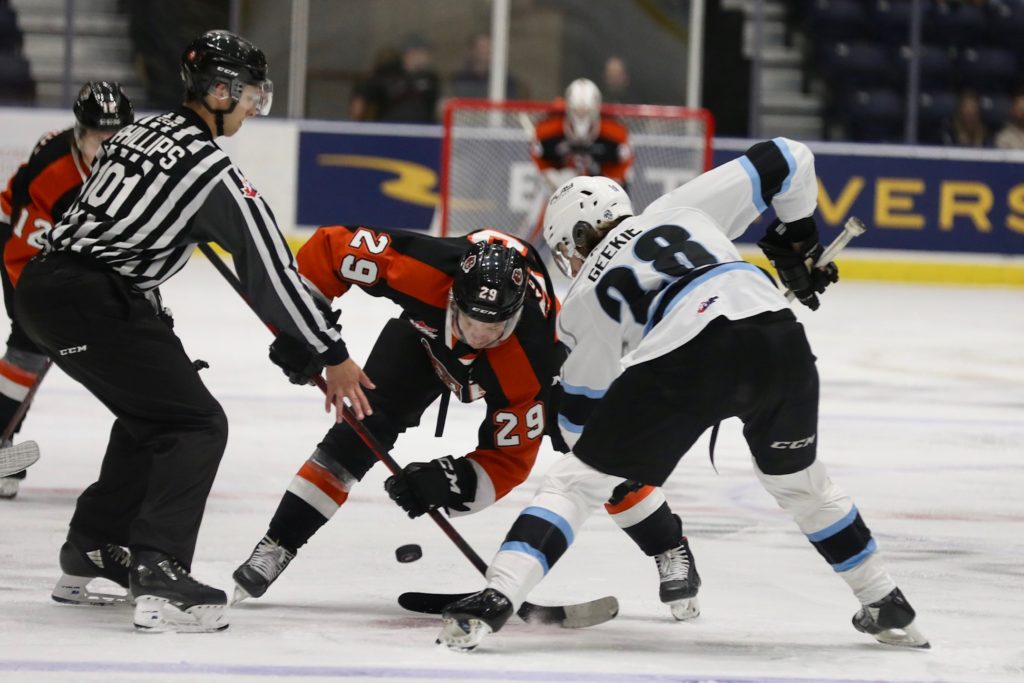 Medicine Hat, AB – The Medicine Hat Tigers found themselves in a tight battle through 40 minutes but just couldn’t solve the top ranked team in the CHL Saturday Night falling to the Winnipeg ICE 5-2 at Co-op Place.

It would be the home side that got things rolling quickly before most of the 2535 could sit down at Co-op place as Oasiz Wiesblatt (Calgary, AB) scored his fourth of the season just 15 seconds into the opening period on a great passing play with Owen MacNeil (Calgary, AB) & Andrew Basha (Calgary, AB) to make it 1-0 Tigers. But just 15 seconds later, a Shane Smith (Cessford, AB) slashing penalty would give the ICE a power play and on the ensuing man advantage the ICE would cash in as Connor Geekie sneaks one past Beckett Langkow (Fort Saskatchewan, AB) to tie the game at 1-1, 1:23 into the game. The Tigers would take another lead in the first thanks to Tyler MacKenzie’s (Red Deer, AB) 3rd of the season in as many games following a re-direction from Bogdans Hodass (Jelgava, Lativa) and Rhett Parsons (Cremona, AB) adding another assist in as many games as well. But late in the period the ICE would find a way to tie the frame at 2-2 after an unfortuante bounce behind the Tigers net and scramble that followed saw Geekie notch his second of the game and tie it at 2-2 after the 1st.

Off to the second where both clubs would go back and fourth with opportunities but at 12:21 in the middle stanza it would be Skyler Bruce picking up a loose puck and beating Langkow coming off the post to make it 3-2 Winnipeg and set-up an opportunity for another comeback chance in the third.

As the third period kicked off, Winnipeg found their way again as Geekie would complete his hat-trick at 3:04 to increase the lead for Winnipeg to 4-2. The Tigers would push with opportunities but couldn’t solve ICE goaltender Keegan Maddocks and Jaren Brinson would notch a late empty net goal to seal the victory for the ICE keeping their record a perfect 4-0.

The Tigers dropped to 1-2 on the season and 1-1 at home following the loss despite shooting their opponents for the third straight game 34-23. Special Teams for the Tigers saw them go 3/4 on the penalty kill but weren’t able to manufacture a power play goal for the 1st time going 0/3.

Next up for the Tigers is their US Division road-trip which starts next Friday, October 7th against the Everett Silvertips. You can follow the Tigers on the radio for all games with Gino De Paoli on CHAT 94.5 starting with the pre-game 15 minutes before puck-drop.

The Tigers will return home to Co-op place again on October 21st when they host the Red Deer Rebels for this 1st time this season following their trip to the US.