IN THE CARDS: Q & A WITH DRU KREBS

DRU KREBS IN THE CARDS
by
Erin Schwab 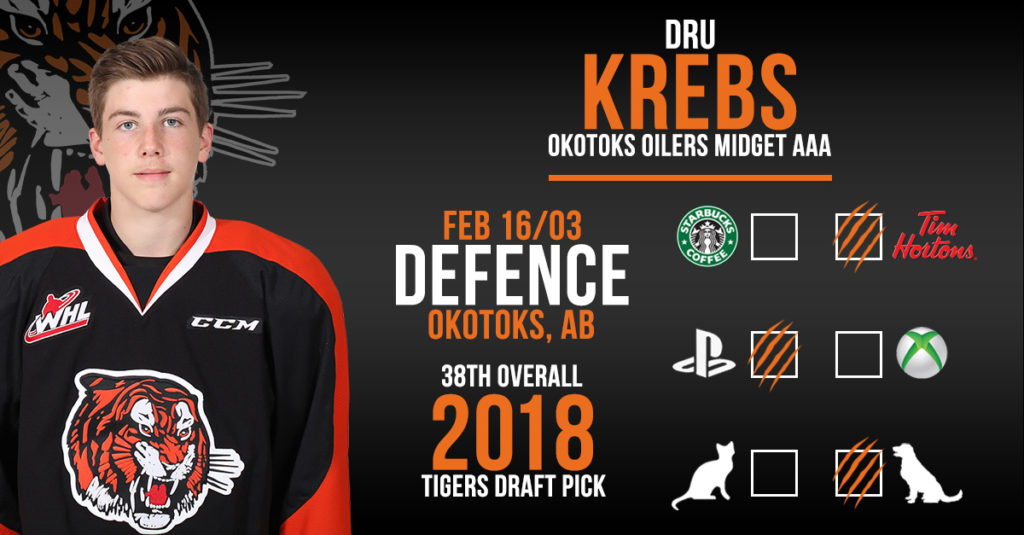 The 15-year-old Okotoks product has been playing in the Alberta Midget Hockey League (AMHL) with the Okotoks Bow Mark Oilers. Krebs has 14 points (1G, 13A) in 25 games played so far this season.

1. How has your season with the Okotoks Oilers been going so far?

We have had our ups and downs as a team and right now we are trying to find ways to win games consistently as well as fighting for a playoff spot.

2. What are you hoping to accomplish this season with your team?

I want to win a championship with the team as well as make it far in the Mac’s midget tournament.

3.  Are you looking forward to participating in the Mac’s AAA Midget Tournament?

I am extremely looking forward to playing in one of the most prestigious midget tournaments in the world. With the amount of NHLers that have played in the tournament, it’s an honour to be able to play in it as well.

4. Thinking back to your time in Medicine Hat during the preseason and spring camp, what kind of impression did the city make on you?

The city of Medicine Hat gave the presence of a hockey town as soon as I arrived in the city. Extremely nice people along with a great organization left me a really good impression.

5. Speaking of the pre-season, what if anything stuck out for you when you had a taste of playing against Lethbridge?

The speed and skill of everyone on the ice was way higher than anyone I’ve played against along with the size of everyone. This gave me the realization of how far I’ve come and how much I need to improve.

6. Is there an aspect of your game you hope to develop before making the leap to the WHL?

In order to make the jump, I believe I need to improve my defence so that I’m easily relied on in defensive zone situations as well as to win one on one battles.

7. How would you describe your style of play?

I am a 200ft defenseman who likes to jump in the play as well as use my skating and hockey sense to make plays with pace.

8. Do you model your game after anyone? If so, who?

I like to model myself after Kris Letang because of his 200ft presence as well as his skating and hockey sense.

9. Who is your favourite NHL team and why?

My favourite hockey team would be the Calgary Flames because I’ve grown up watching them on TV as well as in person.

10. What is your favourite activity or hobby away from hockey?

My favourite activity outside of hockey would be golf because of its ability to bring all of your friends together for a fun time.