INSIDE THE BANTAM DRAFT – JAMES HAMBLIN 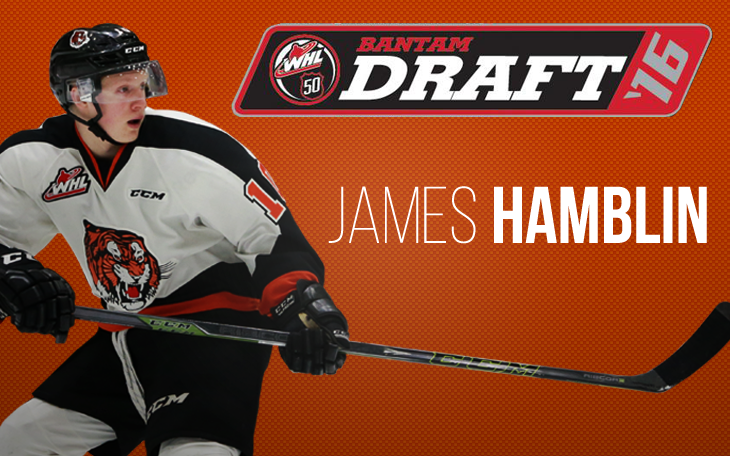 Medicine Hat, AB – Thursday morning the Medicine Hat Tigers are hoping to pick another piece to their puzzle as they hold onto the 5th overall selection in the 2016 edition of the Bantam Draft. The draft takes place, kicking off at 8:30am in Calgary at the Hotel Arts, with many youngsters tuning in from all over Western Canada and the United States.

Being a rookie in the Western Hockey League isn’t always easy and the transition from Bantam or Midget hockey to Major Junior is quite the step. The journey towards a long junior career usually starts at the Draft. For some it is a dream comes true, for others it is a motivation to become a better hockey player and get to the WHL in another way, just like in the way of Mark Rassell.

For Tigers forward James Hamblin the dream of playing in the Western Hockey League came to fruition as the Tigers selected James with the 17th overall pick in the 1st Round of the 2014 draft.  An early wake-up call out of bed was needed for the 8:30am start time but James, alongside his Mom, watched eagerly as the picks were made. Finally at 17, the Tigers were calling,

“To be drafted in the first round is a great honor, but something that you can’t just let get into your head. There are a lot of players that take being drafted for granted and I didn’t want to be one of those players. I was with my Mom watching on the computer and when my name was called, my Dad instantly called me from work, it was like I had both of them in the room at that moment.”

Hamblin’s rookie season saw the Edmonton product suit up in 54 games this past season, a large amount for any first year player. Collecting 3 points on the season (2G, 1A) including scoring his first ever WHL goal against the powerhouse Kelowna Rockets in October highlighted Hamblin’s season. Despite the low point totals, Hamblin knows the hard work is still yet to come to be successful in the league,

“The Bantam Draft doesn’t earn a spot on the team, the hours in the gym and on the ice are, and no matter how high or low you are chosen you have to put the work in. I had a great season last year and even though I didn’t put up many points, I felt I did the right things on the ice when I had my chances. My motivation comes from wanting to be a better hockey player, one of the more dominant centres in the league.”

On that May morning in 2014 Hamblin knew he would most likely be a pick of one of the 22 WHL clubs, but being selected by the Tigers meant a bit more to the now 17 year old. Hamblin’s grandparents call the Gas City home, making the new experience for a rookie in the league that much enjoyable and comfortable. More importantly, Hamblin was excited to be a part of something special at the Canalta Centre,

“The goal was to always play in the WHL, no matter what team, however with the history of the Tigers organization and having the opportunity to make new memories in the Canalta Centre, makes you want nothing more than to be a part of it.”

With the emphasis on “paving your own road” to the WHL, the draft can be a highlight of one’s hockey career and a highlight of their teenage years. It is noted as a milestone and something to look forward to by draft eligible kids every year, however Hamblin agreed with teammate Mark Rassell when the 19 year old said the work to become better never stops, drafted or not,

“The Bantam Draft doesn’t mean the end of the road for those not drafted. You have to make teams remember you and make them regret not taking you in the draft. I am very fortunate to have been taken in the 1st Round, but could have easily dropped into later rounds. But no matter where you’re selected, it’s what you make of your opportunity, which is what counts.”

Hundreds of teenagers are set to be around their computers on Thursday morning for the 2016 edition of the Bantam Draft. The Tigers are slated to pick 5th overall and will look to pick a player for the future.