JEVNE LEADS THE WAY TO A 6-2 VICTORY 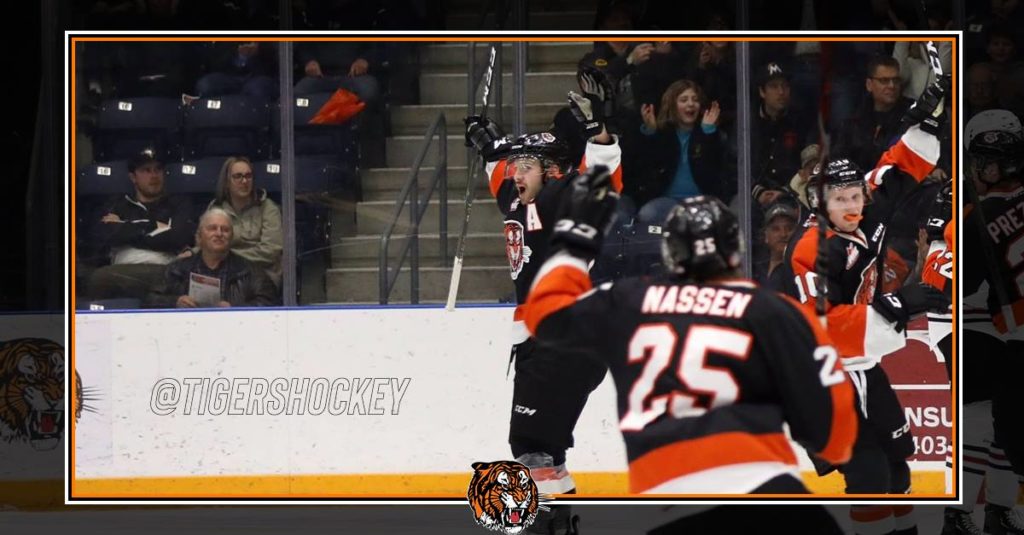 Medicine Hat, AB — The Medicine Hat Tigers won their the second game of their home and home contest with the Red Deer Rebels 6-3.

Veteran forward Ryan Jevne scored his first career WHL hattrick, picked up an assist and earned the first star of the game while the Tigers scored four unanswered goals in the final frame to win the game.

After a scoreless first period, the Tigers and the Rebels traded a pair of goals in the second stanza. Jevne opened the scoring early by firing in a shot over the glove of Rebels netminder Byron Fancy. Linus Nassen and Tyler Preziuso assisted on the play.

Zak Smith responded for Red Deer before Preziuso set Ryan Chyzowski up to beat Fancy glove side and regain the lead. Chyzowski’s goal was his 10th of the season.

Jeff de Wit scored for the Rebels to make it 2-2 at the end of the second period.

While rushing up the ice, Baxter Anderson fed Bryan Lockner the puck. Lockner fired the puck towards the net and Trevor Longo was there to redirect it into the goal. Longo’s third goal of the season was the game-winning goal.

Six minutes later, Captain James Hamblin deflected the puck into the net to score his 11th goal of the season. Daniel Baker and Jevne combined on the play.

Shortly after Hamblin’s goal while the Tabbies were on the power play, Jevne was standing in front of Fancy, picked up the rebound and put it into the net through his legs to score his second of the night.

Late in the game, Jaxon Steele and Corson Hopwo picked up their first career WHL assists when Jevne scored his third of the night and 10th of the season.

Mads Sogaard stopped 21 of 23 shots faced while Fancy turned aside 41 of the Tabbies’ 47 shots.

The Orange and Black are now 12-12-1-2 and will host the Lethbridge Hurricanes Saturday for their annual Medicine Hat News Teddy Bear Toss night. Please bring your teddy bears, toques and/or mitts in plastic bags to throw on the ice when the Tabbies’ first goal is scored. The game starts at 7:30 PM.