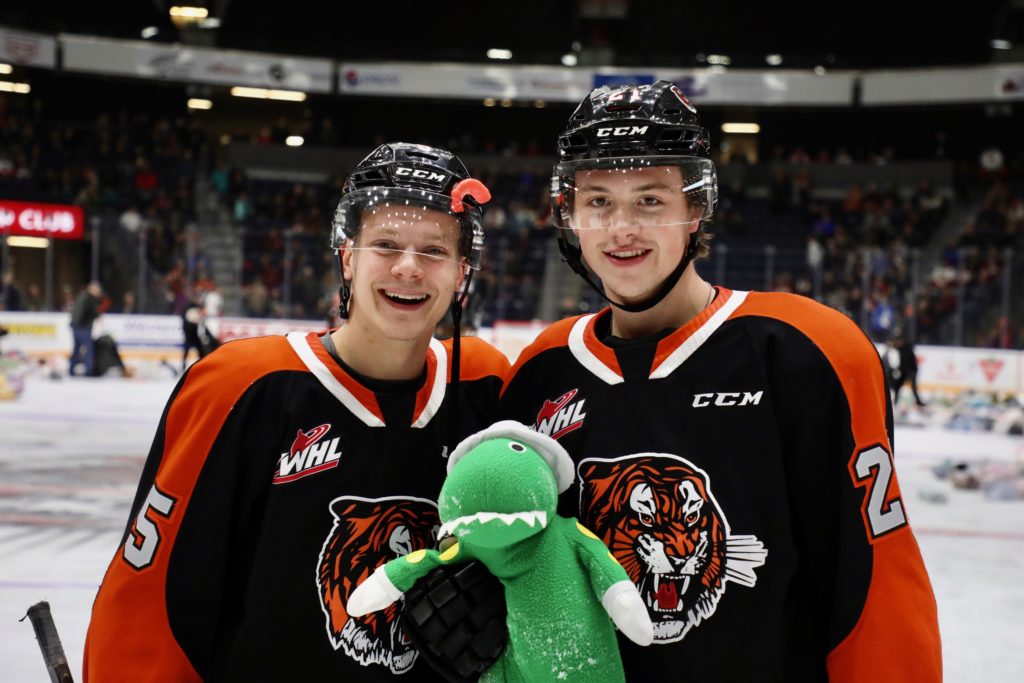 Early into the game while on the man advantage, Kemp redirected Elijah Brown’s shot into the net to send the teddy bears flying onto the ice. James Hamblin also assisted on Kemp’s eighth goal of the season.

The Tigers were leading 1-0 heading into the second stanza where the Blades came scored twice a minute apart to take the lead. Riley McKay tied the game up before Zach Huber gave the visitors a 2-1 lead.

After the Blades took the lead, James Hamblin sent a stretch pass to Brown whose wrist shot flew past goaltender Koen MacInnes to bring the game back to stalemate.

The 2-2 tie was shortlived because Blades veteran forward Kyle Crnkovic scored to regain the lead just over a minute later.

In the final frame, the Tabbies scored three goals in less than two minutes to win the game 5-3. Eric Van Impe fired a point shot through traffic to net his fourth goal of the season on a play from Brown and Bryan Lockner.

Seventeen seconds later, Corson Hopwo fired the puck upstairs to score his seventh of the season. Hamblin and Daniel Baker combined on the play.

Just over a minute later, Jonathan Brinkman fired a sharp angle shot into the net to seal the 5-3 victory. Brinkman’s sixth goal of the season was assisted by Van Impe and Ryan Chyzowski.

Goaltender Mads Søgaard made 20 saves on 23 shots faced while McInnes stopped 41 of the Tigers’ 46 shots.

The Orange and Black are now 18-7-1-0 and they will host rivals the Lethbridge Hurricanes on Tuesday.