KIRICHENKO READY TO GET PLAYOFFS STARTED 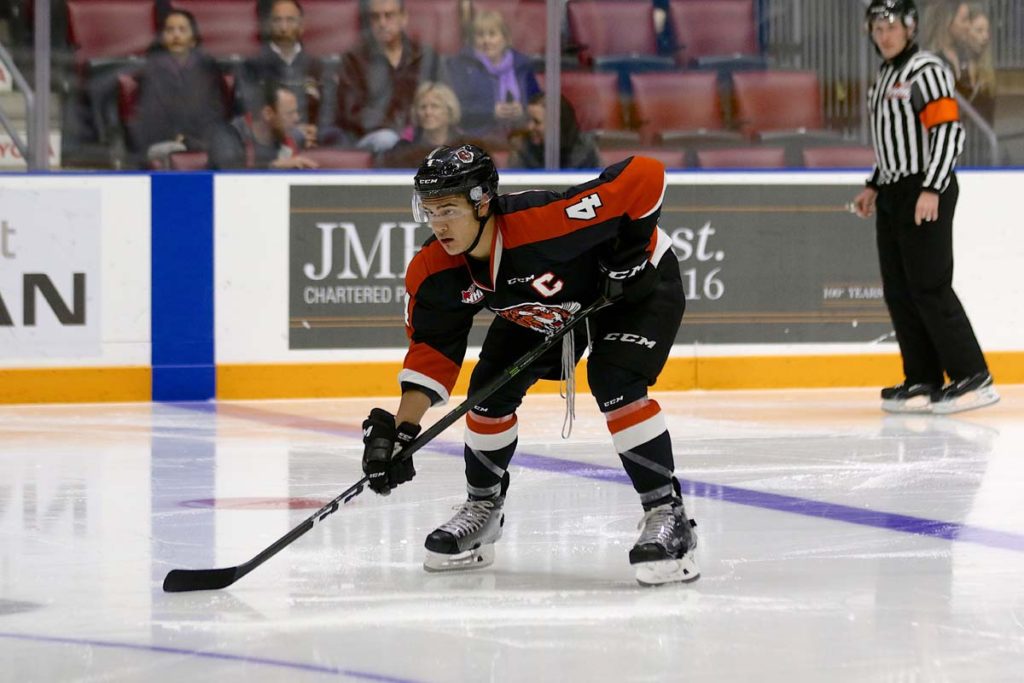 Medicine Hat, AB — 239 games. That’s how many games Tigers Captain Clayton Kirichenko has gone without tasting the atmosphere of the post season. On Friday night, Kirichenko and his 23 other teammates will band together to begin the 2017 WHL Playoffs.

Kirichenko started his career with the Saskatoon Blades as a 17 year old rookie. The Blades selected him in 7th Round of the 2011 Bantam Draft (154th overall). Clayton played in 70 games that season but found himself on the move to the Vancouver Giants during the off season. He played 1 season in Vancouver before finding himself on the move again, this time to his current home. After his trade to the Tigers in 2015-16, it seemed to have given the rugged rear guard new life. In the 37 games down the stretch, Kirichenko recorded 21 points and Tiger fans saw his immediate potential.

Kirichenko is the longest standing Tiger/WHLer who has yet to play a playoff game on the team this year and he says it will be just pure excitement to get the post season started,

“I have waited my whole career for this moment,” stated Kirichenko, “Now that it is finally here I am just waiting to get it started and very excited for the opportunity.”

Post season tradition runs long for the Tigers, their success tracked by the long line of red banners hanging from the East end of the Canalta Centre. The Tigers have had consecutive playoff streaks of 11 and 13. They advanced to the Conference Finals 7 out of 11 years during the 1980s. But no Tiger team has reached the post season in the Canalta Centre. Kirichenko and his team will have the first opportunity to make their own history beginning on the weekend and Kirichenko knows what to expect.

“Playoff hockey is everything that you play for. It may be my first time here but I know it’s intense, it’s tough and a lot of work, but I think we are up to the task and ready for the challenge,” said Kirichenko. “It’s the real season and when the real fun starts and we are looking forward to it.”

Being Captain of a Division winning team is no easy task. It exemplifies leadership, strength and sportsmanship. Kirichenko is a quiet soul in the dressing room and usually let’s his play do the talking. This season Clay shattered previous career highs in all offensive categories, putting himself in with the WHL’s elite d-men. With 64 points generated from the back end Kirichenko knows his game can’t change in order for the team to be successful.

“I want to continue my game offensively, I think we had a really good team this season and they allowed me to find a lot of open holes and get those points but at the end of the day I just want to keep things simple and be a part of keeping the puck out of our net.”

Kirichenko’s break out season had him leading all defenceman in assists at one point in the year ultimately finishing with 52, becoming the first Tiger defenceman since David Schlemko in 2006-2007 to reach the 50+ assist plateau.

“I didn’t really change the way I played. I think I got more comfortable in our systems this year compared to last year and I just wanted to keep everything simple as best as I could,” commented Kirichenko. “When you do the little things right you get rewarded and I like to think my success is based off that and it just worked out for the best.”

As the post season is upon the Tigers, Kirichenko quietly reflects on his time so far in Medicine Hat and has cherished every moment while he has been here. He knows that there is lots of work to be done in order to bring another Championship to the Gas City.

“Coming here has been a blessing for me. I have loved the city of Medicine Hat and their fans. Playing hockey in front of thousands of dedicated fans is enjoyable every night and I look forward to seeing the fans come out to the Canalta [Centre] during our playoff run,” stated Kirichenko with a smile. “And hopefully we can have a long run here this spring.”

Kirichenko and the Tigers open the 2017 Playoffs beginning Friday night against the Brandon Wheat Kings.