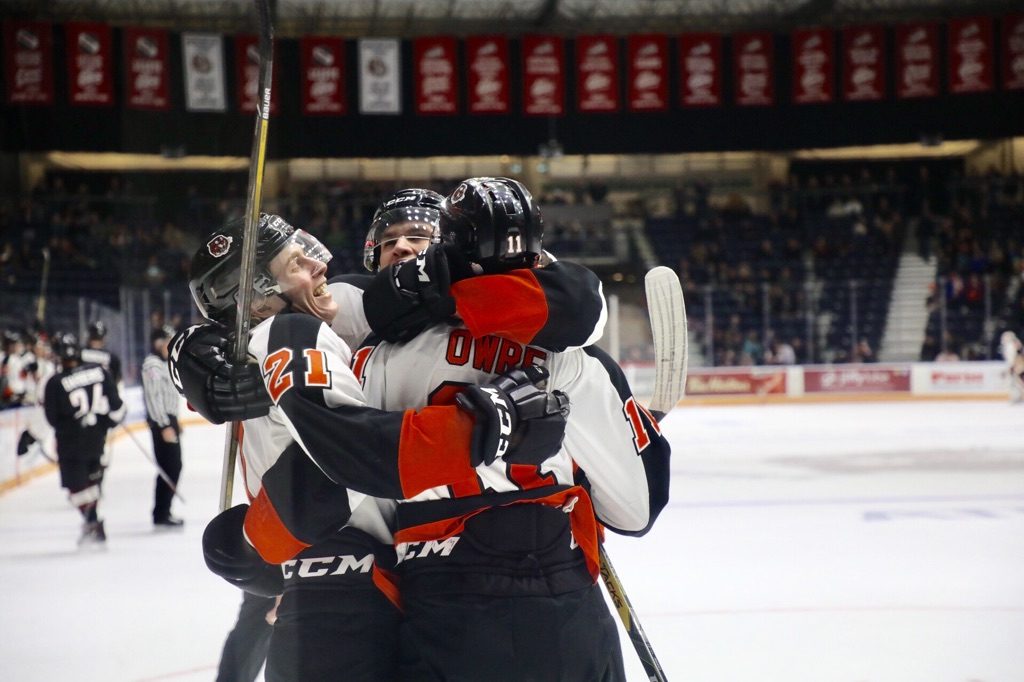 Medicine Hat, AB — The Medicine Hat Tigers came into the Saturday night against the visiting Vancouver Giants having dropped their last 2 games by a 15 to 9 differential. It was time to get back into the win column against a struggling but suddenly surging Giants team. The Giants were on game 3 of their 5 game Central Division road trip and had previously won 2 of their last 3. It took some late heroics but the Tigers ended up pulling out a big 1 goal victory.

Starts haven’t been the best for the Tigers over the past few weeks and Saturday’s game was no different as they found themselves trailing just 1:17 into the game as James Malm buried his 12th of the season past Michael Bullion, making his first start as a Tiger. Malm’s goal was on the game’s first shot, it was enough to get the jitters out for Bullion as he played tremendous for the Tigers. Before the period would end the Tigers tied up the game on a goal from John Dahlstrom, his 18th of the year. Dahlstrom took a pass from Mason Shaw and roofed one by Ryan Kubic. Kubic had previously won his last 3 starts against the Tigers, only allowed 2 goals on 99 shots. The period would come to a close with the game tied at 1’s.

Dominating, a word that could be described by the Tigers’ start to the second period as they controlled the play and had great shift from all 4 lines. More noticeably was the play by the Tigers 4th line, Ryan Chyzowski, Tyler Preziuso and Ryan Jevne, who although don’t get much credit on the scoresheet, help turn momentum with their speed, tenacity and physical play. Despite the Tigers dominating the play, Vancouver would score 2 unanswered goals. First, Ty Ronning scored his 16th of the season which was followed by Jack Flaman’s 11th of the year shorthanded. It felt like the air was sucked out of the Canalta Centre. But before the period ended Steven Owre, who would have a game for the Tigers cut into the lead with his 12th of the year as they headed into intermission down 3-2.

Medicine Hat has notably been a third period squad, scoring over 85 times in the final frame. On Saturday it was no exception as Owre would kick off the frantic period. Owre’s 13th of the year tied the game at 3 with assists to linemates Zach Fischer and Chad Butcher. Five minutes later James Hamblin would win a face off in the offensive zone. Teammate Mark Rassell picked up the loose puck and found a driving Hamblin who roofed his 9th of the year to put the Tigers ahead with just over 13 minutes to go. It wasn’t until the final 3 minutes when Brad Forrest took a slashing call and Malm, who had 3 points on the night, would make the Tigers pay on the power play with his 13th of the season. Kristians Rubins, who was back from World Juniors, took an ill advised tripping penalty with 1:01 remaining putting the Giants on a crucial man advantage. But finally a bounce went the Tigers way when an errand pass to the point hopped over the stick of the Giants defender and Butcher, along with Owre were off to the races. A rare shorthanded 2 on 0 capped off by Owre’s 3rd of the night with just 7 seconds left on the clock to win the game for Medicine Hat.

THREE STARS OF THE GAME

Medicine Hat will travel to Edmonton for their final Sunday game of the regular season, a 4pm puck drop at Rogers Place before coming home next week for a pair of games and their 7th annual Skill Competition. 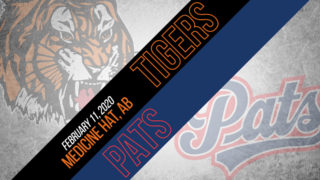