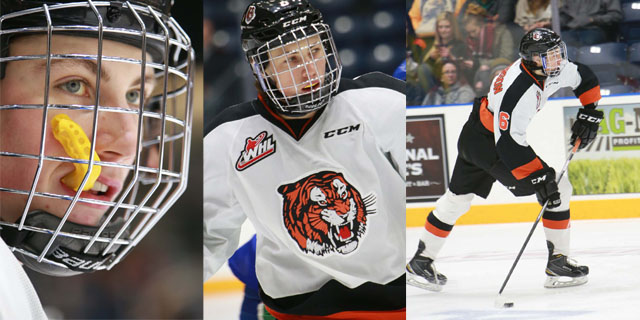 Medicine Hat, AB – Throughout minor hockey kids from all over Canada play within their hometowns, expanding their boundaries only for tournaments. Until that one day they get drafted or listed to a junior club, they leave their parents and home behind to chase a dream of playing professional hockey. For Redcliff’s Dylan MacPherson playing 6 games last year for his hometown Medicine Hat Tigers is a dream he hopes will turn into a full-time reality this fall.

“It’s really exciting to be a part of your hometown team. You grow up watching them and now to be a part of it is amazing. On the other hand, it also can be very nerve wracking playing in front of people you know and see every day.”

MacPherson’s hockey journey took the 18 year old through the ranks of the local SEAC Tigers organization, an organization that the Tigers have supported for decades. At every home game parents and players from SEAC teams work 50/50 in order to raise funds for their programs. MacPherson played 5 seasons in the SEAC program finishing last year in Midget AAA which he appeared in 19 games, recording 8 points.

Having a ‘never say die’ attitude is always noticed in the sporting world. Over the past few seasons MacPherson battled injuries and illness, which kept him out of game action and the potential to be noticed by scouts. However his parents kept him motivated despite the setbacks early on,

“I had a couple of tough seasons in Midget AAA but I came back and played hard. My parents always told me to practice and play hard all the time because you never know who is watching in the stands.”

And watching in the stands was Tigers Senior Director of Player Development Darren Kruger.

“I was approached by Kruger after a SEAC Midget AAA game at the old Arena. He had told me that the Tigers were watching me for a couple of seasons and had liked my progress game after game. He then mentioned he was interested in signing me and I couldn’t say no to my hometown club.”

Playing in front of a few dozen fans in Midget hockey compared to playing in the limelight of the Canalta Centre was something MacPherson had to adjust to on his first call-up with the big club in January.

“As a local kid the excitement of playing in front of your home town is great. The fans tend to expect more from you, maybe get into the game a little bit more when you’re on the ice. Our fans are amazing but they will let you know when you make mistakes, especially if you’re the home town boy.”

Last season saw local boy and son of Head Coach and General Manager Shaun Clouston, Connor suit up in the orange and black. Connor is eligible to return to the Tigers as a 20 year old overage player and will be at camp later this month. Before Clouston was Curtis Valk, who currently plays for the Kalamazoo Wings of the ECHL and has made appearances in the AHL with the Utica Comets. Both players excelled under the pressure of their hometown, with Valk even picking up WHL All-Star honors.

“I watched Curtis many times in the old building and being a teammate of Connor’s this past season, I have seen how they have handled themselves on and off the ice. Curtis and I work out at the same gym in town and although I haven’t talked much to him about the experience, I definitely know that I can’t try to do everything, just play my game and don’t let the distractions of home into my head.”

The 2016-17 season for MacPherson will be packed with milestones as the rookie looks to crack the roster and the Top 4 on the Tabbies blue line.

“I just want to be healthy this year and play some great hockey. Keep things simple and play my game. I am going to give my all at camp. I want to be one of the top defenseman on the team this season.”

MacPherson and the Tigers know that no matter the outcome after main camp, a whole city is rooting for his success.