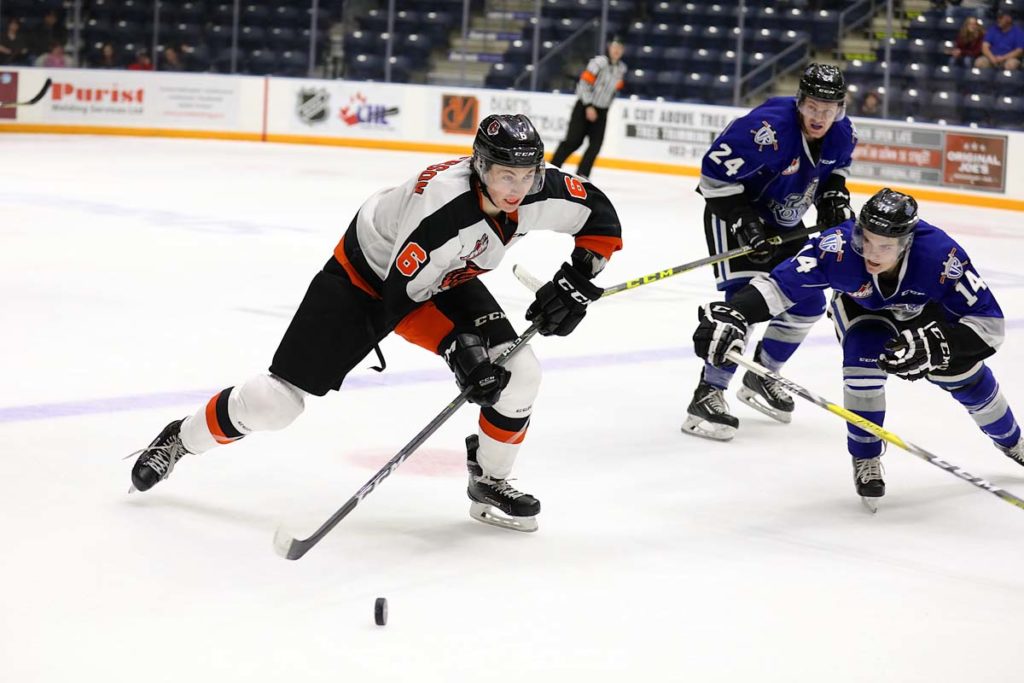 Medicine Hat, AB — For Tigers defenceman Dylan MacPherson suiting up in the orange and black for his first full season in 2016-17 was an opportunity of a lifetime. Family and friends at every game. Sleeping in your own bed. All characteristics of a locally home grown hockey player.

MacPherson, a Redcliff native, started his hockey career playing within the local South East Athletic Club progressing through to the Midget AAA program. It was there the Tigers took notice. Tiger scouts watched him all season and towards the end of his playing year was listed by his hometown club. Fast forward to his first WHL game in 2015-16 as an affiliate, MacPherson didn’t look out of place and used his speed and agility to move the puck effectively. ‘Mac’ as he is known in the dressing room would appear in 6 games that year.

Turn the page to 2016-17 and MacPherson’s season turned from being a rookie to being a big minute player for the Tigers down the stretch. It had looked if the tall defenceman felt ‘at home’ so to speak on the ice and in the dressing room. The 2017 Playoffs were a time where Mac was relied upon to carry some of the load, eat up the minutes not taken by guys named Kirichenko or Quenneville. When Assistant Coach Joe Frazer tapped him on the shoulder for his next shift, MacPherson was ready and willing to do what it took to win.

“I learned so much last season about who I am as a player. I slowly grew mentally stronger, learning to play in all situations,” said MacPherson from his home in Redcliff, “I wasn’t sure how the transition would be for me to the WHL but I brought a lot more to the team that I thought I would.”

With camp on the horizon for another Tigers season MacPherson has put aside the jitters of playing in front of his hometown crowd, friends and family. Racking up 9 points in his rookie campaign and going goalless on the year, doesn’t point to the type of season Dylan had. His play defensively very rarely gets noticed by fans but can be seen by scouts, coaches and teammates. Following his impressive rookie year, MacPherson will be looking to improve right out of the gate.

“I think I have to come out strong from day 1 of camp. I worked hard this off season to become better physically and mentally and I want to use my skating as an asset. One of the bigger things I took away from last season was that I have to shoot the puck more. To be able to create offense for our team, the puck needs to get to the net and I want to be that guy (along with Quenner) to have the big shot in big moments. The biggest thing is to be relaxed on the ice and take your time with decisions.”

For MacPherson, entering his 19 year old season means more responsibility and leadership for the younger players. He was able to see first hand what quality leadership looks like from guys like Ty Stanton in 2016 and last year’s teammates Clayton Kirichenko, Chad Butcher and Steven Owre. Known as a quiet guy in the dressing room, especially on game days, Dylan knows that he must take his game to the next level.

“I am a quiet leader. My leadership style is always about leading by example. Whether you’re on the ice or off it, you want to respect the game and your teammates, show them what being a leader is all about. Watching Stants [Stanton] and Clay [Kirichenko] over the past two years has left a lasting impression on my game. They taught me that no matter what, if you’re sore, hurt or tired, you give it your all, you keep going. Both of those guys had the biggest hearts and passion for the game.”

Heading into 2017-18 MacPherson knows if he wants to be a Top 4 guy, a penalty kill guy or a power play guy his game will have to be at the top end of his potential. With the defence core changing ever so slightly this season there are more opportunities for more minutes, big minutes.

“I played last season a bit nervous at times. But as the year progressed my confidence grew. I felt more relaxed and that’s how I want to play this season as well. I want to be the guy everyone relies upon and plays against other team’s top players like a Nolan Patrick and shut him down. I am really looking forward to this season and what it has to bring.”

Training Camp, which kicks off next weekend, will see good competition and balance of skill and talent both on defence and at forward. But for MacPherson camp is an opportunity to see good friends again and compete as a group as a lot of the returning core has unfinished business to take care of after last season’s playoff exit.

“I really hated losing in Game 7. That was the hardest loss of my hockey career. Seeing all the guys battle so hard and with the season we had, it was crushing. But I think we have put that behind us and know that there is unfinished business to be taken care of, we want to be in the Finals and I think we have the team to do it. I am really excited for this next season and hope we can have the success we had last year.”

When asked who he is most excited to see play at camp this season, MacPherson responded:

“Jimbo [James Hamblin]. I think he is going to have another breakout season and double his points from last year.”

Exhibition season will kick off September 1st in Lethbridge and September 2nd in Taber. Tickets are available for the Taber game and more information can be found here —–> Taber Game.

The Tigers Home Opener is slated for Saturday September 23rd at the Canalta Centre against their rival the Lethbridge Hurricanes as the Tigers open their 48th season in the Western Hockey League.