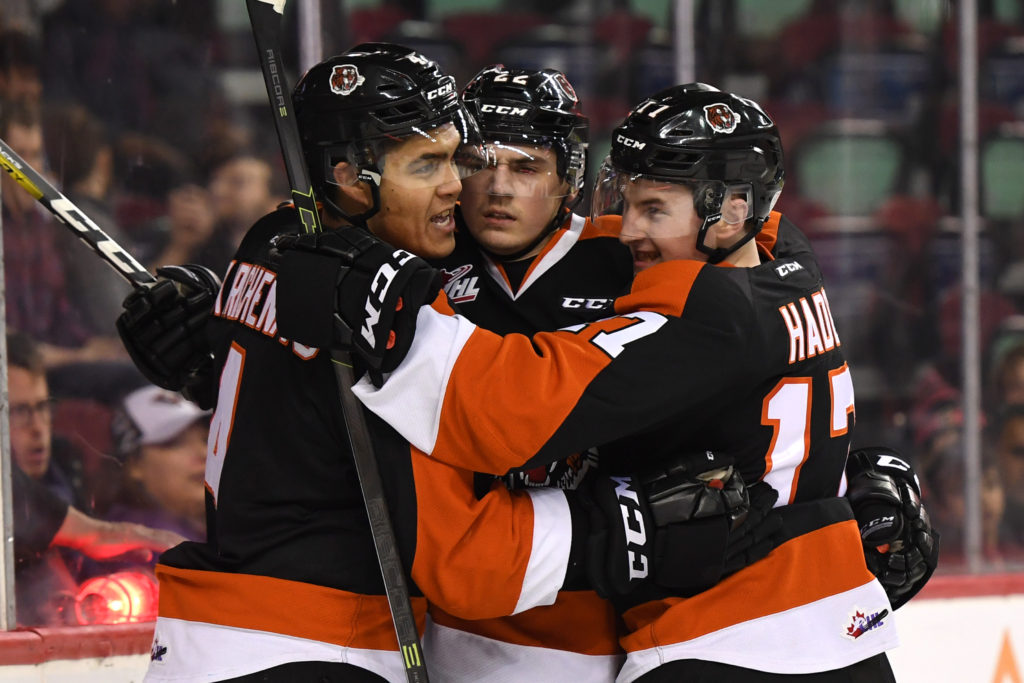 Calgary, AB — It was a home coming of sorts for multiple Tigers but none made a greater impression than Mark Rassell who knotted his first career hat trick in front of family and friends. The Tigers were looking to carry some momentum to Saturday’s game against the Lethbridge Hurricanes, a team that is chasing the Tigers for the Central Division crown. They certainly did that after a lackluster start, rattled off 7 consecutive goals cruising to a 7-2 victory.

Calgary would get on the board with two unlikely scorers. Just over a minute into the game Jaydan Gordan scored his 2nd career goal following the play. Nick Schneider kicked a rebound out into the slot and Gordan was in the right place and roofed a puck over the shoulder of the 19 year old Calgary Flames prospect. Moments later a fluky goal from Tristen Nielsen had that Hitmen out front by 2. For Nielsen it was just his 2nd goal of the season. However Medicine Hat used their power play to get back into the game. Mark Rassell scored the two of his three goals in the opening period, both on the man advantage. After 20 minutes the game was all tied up at 2.

Heading into the second period, the Tigers decided to pick up the pace creating turnovers and not giving the Hitmen room to breath nor move the puck. Their pressure defense lead to some great chances at the one end. It was Jordan Henderson however who would turn the game upside down. Henderson dumped a puck in on Hitmen goaltender Trevor Martin, the puck bounced right before the net and slid through the arm of Martin to give Medicine Hat a 3-2 lead. Henderson’s 5th of the season would end up being the eventual game winner on this night. Zach Fischer added a goal in the period and Schneider was brilliant when he needed to be and preserved a 2 goal lead into the break.

The third period was all Tigers once again as Rassell would complete the hat trick 6 minutes into the period, receieving a nice pass from James Hamblin and Max Gerlach. Matt Bradley added another power play marker for the Tigers as their second ranked man advantage went 3 for 5 on the night. Finally captain Clayton Kirichenko potted his 9th of the season on a pretty back door feed from Tyler Preziuso. The goal scoring spree would close out a dominant performance from Schneider and company and gave the Tigers much needed momentum heading back home to face Lethbridge 24 hours later.

Medicine Hat is back in action Saturday night as their rival Lethbridge Hurricanes come calling to the Canalta Centre. Medicine Hat will spend 4 of the next 5 games at home before beginning March with a 3 game road trip through Saskatchewan.