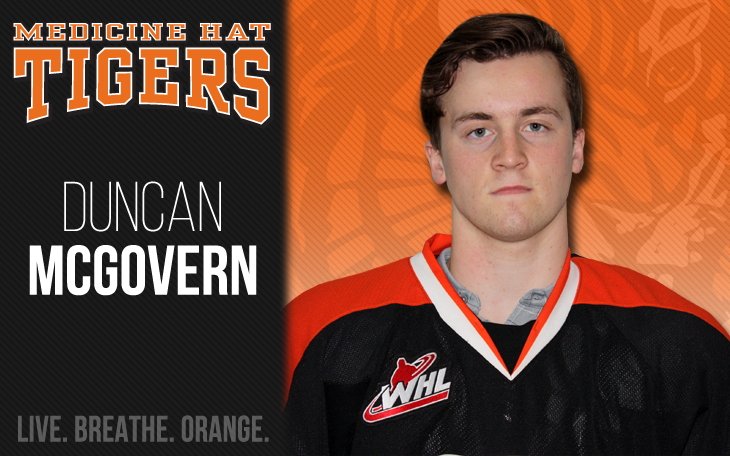 Medicine Hat, AB — The Medicine Hat Tigers are pleased to announce the signing of goaltender Duncan McGovern to a Standard WHL Player Agreement on Thursday. McGovern was the Tigers 5th Round Bantam selection in the 2015 draft (91st) overall.

The Winnipeg, Manitoba native had a strong season in his first year of midget eligibility appearing in 39 games with the Central Plains Capitals Midget AAA team, going 12-10-0-2 with 3 shutouts. In those appearances McGovern posted a 2.45 GAA and 0.919 save percentage. His 2.45 mark ranked 8th among all goaltenders in the Manitoba Midget Hockey League.

“We are thrilled that Duncan has chosen the Tigers and the WHL as his development path,” said General Manager and Head Coach Shaun Clouston.

Most recently McGovern was chosen as one of the top goalies in his age category to attend the Program of Excellence Goaltending Camp, hosted by Hockey Canada in Calgary starting Thursday and running until Sunday.

Tigers goaltending coach JF Martel has worked with McGovern over the past years and praises him for his hard work ethic, “Duncan is a strong goaltender with an already good technical game. For his age he has a great work ethic and plays with a lot of confidence and poise. I am looking forward to continue to work with Duncan as he progresses to the WHL.”

McGovern was most recently in Medicine Hat for Orientation Camp, his second appearance at the camp, leading team White to the Championship trophy. The signing solidifies the Tigers goaltending over the next few years.

“We welcome Duncan and his family to the our organization and look forward to seeing him in a Tigers jersey in the near future,” said Clouston.

McGovern is eligible to make the opening night roster this season and will compete for a spot at main camp beginning in August.