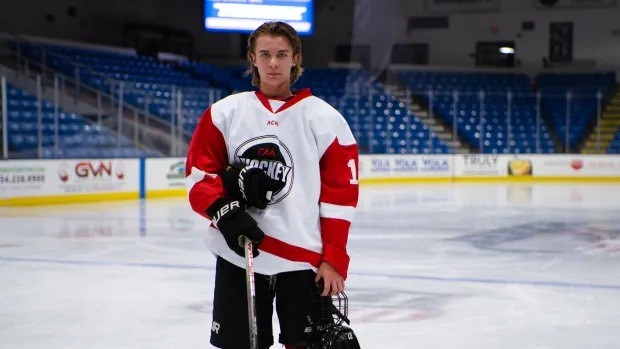 Story written and done by Juanita Taylor of CBC News

Last hockey season was a good one for Gavin McKenna in the Canadian Sport School Hockey League’s U18 division.

He was their top scorer with 65 points in 35 games.

“I kind of knew that I was bound to accomplish something,” McKenna said from his Whitehorse home. “But, yeah, it came quick. So, uh, it was a bit surprising.”

According to the CSSHL, he’s just the third player to be granted exceptional player status by B.C. Hockey and Hockey Alberta, behind the WHL’s Connor Bedard and Matthew Savoie, who is a top prospect in the 2022 NHL draft taking place Thursday at 7 p.m. ET.

The status gives players the rare privilege of entering the WHL at such an early age.

He’s hoping McKenna, who turns 15 in December, can help do that, even though WHL rules say he can only play five games this season because of his age.

Fourteen-year-old Gavin McKenna has become the first Yukoner to be the 1st top draft pick for the WHL. #TheMoment pic.twitter.com/rCk8qtodTh

“So we made some moves and that’s the only reason we got Gavin. We traded away other players. We got other picks in the first round.”

Desjardins says he can see McKenna’s confidence on the ice and wants to set him up to succeed.

A former NHL coach and coach of the 2018 Canadian Olympic Men’s Hockey team, Desjardins admits it’s not very often he sees a player like McKenna.

“His vision is really exceptional.”

He says it’s rare that a 14 year old is chosen as the first overall pick.

“It’s a process. So where he ends up remains to be seen a little bit. But he’s certainly well on his way.”

The love of the game

McKenna’s parents, Willy and Krystal, both played hockey so it was easy to pass along the love of the game to their only son, who got hooked at a very young age.

Krystal remembers those years very well, including early ice times almost every day. Not just on the ice, but off the ice as well — specifically, in the basement of their old house in Whitehorse, which was unfurnished.

“We just kind of left it open for him. And the walls got pretty damaged from him shooting balls and pucks and stuff at the nets.”

Willy also constructed outdoor rinks in their backyard every winter and McKenna was there, even in -30 C weather.

“My dad obviously put lots of hours into building it. So I would have to repay him by spending hours on the ice, too,” McKenna said with a smile.

He also says shooting more than 100 pucks a day in that backyard all year was what helped him get to where he’s at.

The family says the people of Whitehorse and the business community help them fundraise so they can travel at least a dozen times a year to go to hockey camps and tournaments.

Krystal says they couldn’t have done it without that support, whether people were buying raffle tickets or Christmas trees.

“Anything that we were selling, they were buying … whether they wanted it or not. If we were collecting pop cans for recycling, the neighbors were definitely there.”

McKenna started travelling for hockey camps and tournaments when he was about eight. Since then, he’s gone as far away as Italy and Nashville for training, and most recently Detroit.

Willy says he’s proud of how far his son has come.

Last season, McKenna attended the RINK Hockey Academy in Kelowna, B.C., where he got daily ice and gym time — and got scouted by the WHL.

McKenna, who knows it’s not an opportunity most 14-year-olds get, is spending his summer at home in Whitehorse training for his WHL debut — the Tigers’ season opener against the Lethbridge Hurricanes on Sept. 24.