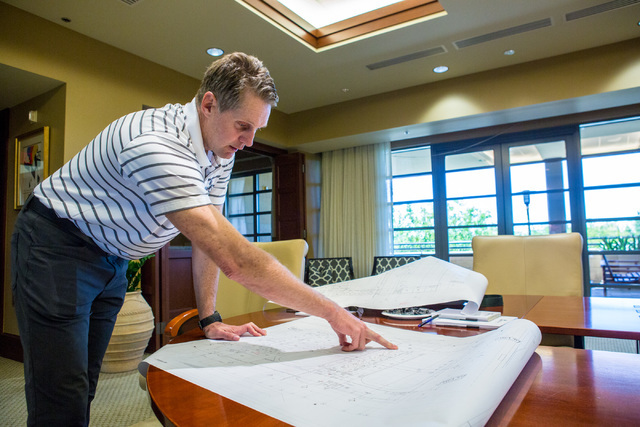 He’s helping the team design their locker room. He’s working on the Summerlin-area construction of the practice facility, which also includes the team’s office space. He guided billionaire owner Bill Foley to hire George McPhee as the team’s general manager.

“At this point I just do the work,” said Craven who played 1,071 games in his NHL career between the Detroit Red Wings, Philadelphia Flyers, Hartford Whalers, Vancouver Canucks, Chicago Blackhawks and San Jose Sharks. “I know what’s out there. I know what needs to be done and that’s what I do.”

The 52-year-old Craven is a living, walking embodiment that timing can help in the successes of life. If he hadn’t met Foley while playing golf in Whitefish, Montana in the early part of last decade, he may not have had this opportunity – to help mold and create the first major pro sports team in Las Vegas.

But his ability to successfully do his job is more than just luck. Through those trips to the golf course and personal time with Foley the two have built up a level of trust and understanding where Craven has quickly become one of the few people who can help build this team in Foley’s image.

Because Craven didn’t want to go strictly into hockey after he retired, commercial real estate and construction opportunities made him more well-rounded for this moment.

“What I do see is yes, am I fortunate to be in the right place at the right time? No doubt I’m fortunate,” Craven said. “Do I apologize for that? Not a bit. I was in the right place in the right time but what I’m doing? I’m much better prepared than I would have been 10 years ago. I’ve had some businesses. I’ve gone through some of the trials and tribulations. I’ve gone through some failures and some successes from hockey and I’m smarter for it than I would have been coming out as a 37-year-old guy who left the game and moved right into management. I have a different perspective now.”

The place became special to Craven mostly because, “It was the only place we ever went.”

When he started his NHL career and it became financially possible for him to purchase an offseason home, the choice was easy. The Medicine Hat, Alberta native could have either worked on a ranch with his family or found his own place where he could relax his body and enjoy the scenery. In 1991 he purchased a home in Whitefish.

“It had been my offseason home for about nine years because my last year was 2000. That was the timeframe where I kind of established some roots,” Craven said. “When I was done playing in San Jose, it was easy. I went back for the summer time and never left.”

After he finished playing, Craven took a player development job with the Sharks for one year. He would go to the team’s top minor league affiliate in Cleveland on a monthly basis, but always had different matters on his mind.

“I was in a precarious place in my life because I had a young family but we just had a child born, so I had a baby, a 3-year-old and a 5-year-old, and I know the path of staying in the game,” Craven said. “I knew that was going to entail a lot of movement on my part and I really wasn’t – it really didn’t appeal to me at that point because of where I was in my family life at the time with my children.”

So Craven returned to Whitefish where he immersed himself in several local opportunities such as commercial real estate and construction. He also got to see his family grow up, which was important in his life at that time.

He never stayed completely out of the game and often conversed with some of his friends who were involved in the sport. He said two of his best friends are Detroit Red Wings assistant coach Doug Houda and Pittsburgh Penguins assistant coach Rick Tocchet. But at the time he had different passions he needed to pursue.

“I missed it. I stayed in touch and stayed relevant so that never went away, but the actual day-to-day stuff I had to pull back,” Craven said. “I wasn’t willing to move my family around the country for the next ‘X’ amount of years until I figured out where I fit in in the hockey world post playing.”

Craven doesn’t specifically remember the first meeting between him and Foley. It was more them seeing each other at the golf course at multiple points in the early 2000s and chit chatting a few times before striking up a true friendship. Foley also has a place in Whitefish, though his home is in Las Vegas.

Foley hadn’t thought of owning a pro sports team and it was Craven who said he first planted the seed in the billionaire’s head.

“I said to Bill, I used to say it more than once, I said ‘why won’t you buy a pro sports team? What greater enjoyment would have you have being able to pick up the paper in the morning and seeing how your team did or go to watch your team?’” Craven said.

Foley wasn’t dismissive of Craven’s idea, but he didn’t look into it seriously until around three years ago when the idea to bring an NHL franchise to Las Vegas started to make sense to Foley according to Craven.

“He kind of threw the shot over the bow of, ‘hey I want to put a team in Las Vegas’ and I was skeptical like everybody else was,” Craven said. “As time moved on it kind of morphed and incrementally it got a little more serious and serious.”

Since then, Craven has been with Foley every step of the way to first help the bid get approved and now turn it into a successful organization.

According to Craven a lot of the work arrived quickly. This is because he said Foley’s group wasn’t 100 percent sure it would get a team until the unanimous Board of Governors votes were cast on June 22. Since then it has been full speed ahead.

One of the first items involved finding a general manager. Craven looked to his contacts to try to figure a list of people to put in front of Foley and eventually he and Foley decided on McPhee. Craven didn’t know McPhee especially well, but admired McPhee’s management style from Craven’s time with the Vancouver Canucks – where McPhee was assistant GM.

Even though Craven helped pick McPhee he is quick to point out that hockey operations, a coaching decision and player personnel, are McPhee’s choice. But if McPhee wants Craven’s opinion, Craven will certainly give it.

“Ultimately George is going to be held accountable. I’m going to premise that with yeah we talk. We talk about guys, we talk about scouts, we talk about lists of people who have called both of us as far as résumés go. Everyone that we’ve ever talked to, we go through them together,” Craven said. “Again he’s the general manager. Make no mistake about it. He’s the general manager of the hockey team. If I can help him in any way, I’m more than willing to do that.

Added Craven, “My connections in the league are extensive. When you’ve played as many years as I’ve played, you build up relationships with a lot of people as far as my contemporaries were all on the outside of the business. They’re in management and that side of it now. I can pick up the phone and call any team in the league and know someone in their organization to talk to.”

The only input Craven doesn’t have is on the team name or logo, which is all Foley. Craven chuckles when this is brought up.

“Yes I’ve been in the meeting. There’s only one person who is going to make the call,” Craven said. “This is not going to be done by committee. It may be listened to by committee, but it’s not decided by committee.”

Craven has essentially moved from Whitefish to Las Vegas. At 6 a.m. he’s up and rolling at whatever that day brings. On a Wednesday in late July he was in the office involved with construction meetings. He met with UNLV and then a marketing firm. He also talked to someone involved with the organization’s corporate sponsorship group to go over office space. He also had to help the team prepare for an upcoming ticket open house the following week.

Really he’s OK with giving his best day-by-day and then seeing where he ends up when the dust settles.

“I’m not coming into a certain per-conceived role because we’re not able to do that at this point in time,” Craven said. “You’ll eventually get to that, but we’re a startup company. For anyone who has been around a startup company knows that if you think you’re only going to do one thing, you’re probably mistaken.”