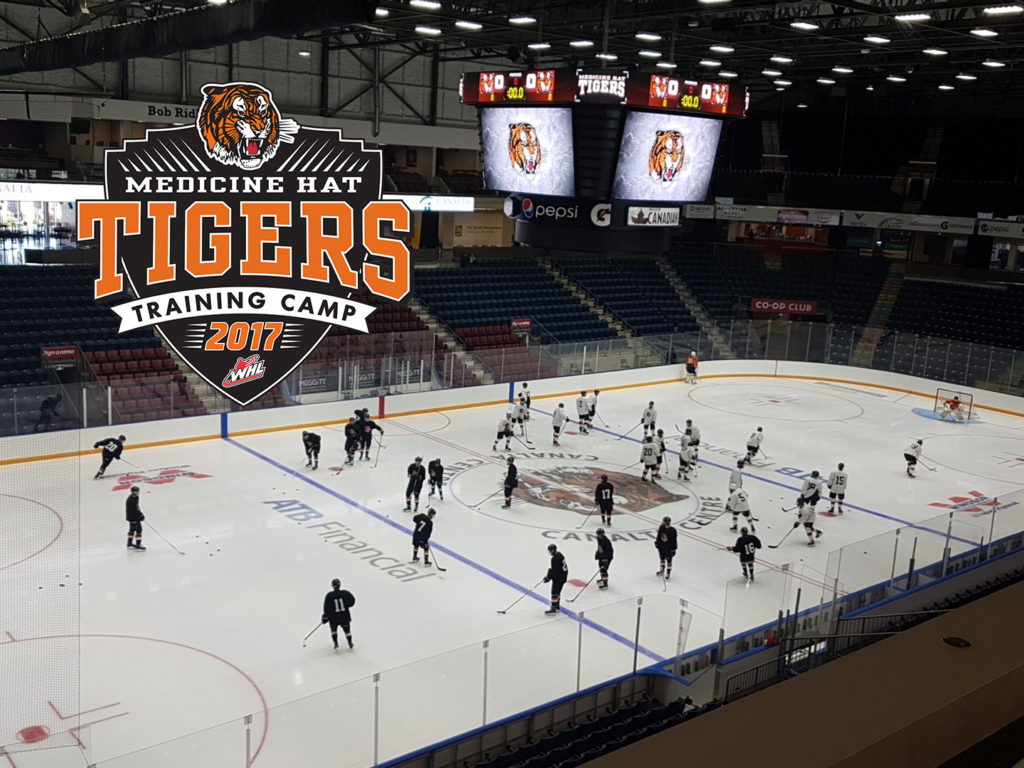 There were no easy inches at the Canalta Centre this weekend.

Even playing on the only line with two returning Medicine Hat Tigers in Sunday’s training camp intra-squad game, prospect Dawson Heathcote learned quick thinking will be of vital importance if he hopes to crack the roster full-time this season.

“All the young guys are pretty good this year. It’s pretty impressive,” said Heathcote, who earned a place on Medicine Hat’s pre-season roster after a strong weekend at the camp. “I think we all just have to keep working every single day and I’ll obviously work on my game as much as I can.”

Team White came back from an early 3-1 deficit to take a 5-4 shootout victory in the annual intra-squad matchup — which featured five returning players and 36 prospects hoping to either crack this season’s roster or make an impact for the future.

Tigers assistant coach Joe Frazer says it was great to get a mix of upcoming talent and veteran presence in the intra-squad game, as it allowed the young prospects to gain a greater understanding of what it will take to reach the major junior level.

“A lot of these kids played bantams last year, all the ’02s, and some minor midget or major midget,”said Frazer. “It’s always a big step up from those leagues to the WHL, so it’s nice for these kids to get a chance to play against some of our veterans.”

Rookie forward Josh Williams added it’s an undeniably steep curve from midget hockey to the WHL. The 2016 fifth overall bantam draft pick played in four games as an affiliate with the Tigers last year during a 55-point season with the Canada Sport School HockeyLeague’s Yale Hockey Academy, and says the WHLsimply doesn’t leave much room for error.

“Guys are bigger and stronger and you have to make decisions quicker. It’s just a way harder game to play up here,” said Williams, who scored twice for Team Black in Sunday’s intra-squad game. “I felt pretty good. On both my goals I got great passes from my teammates, but the outcome wasn’t what we wanted and the win is more important than personal stats.”

Defensive prospect Cole Clayton agreed, adding he spent the entire working toward securing a full-time role with the Tigers this season.

“It was grueling. Lots of working out, lots of skating, I was just doing everything I could to make this team,”said Clayton, who put up 19 points with the Alberta Midget HockeyLeague’s UFABisons last season. “I think my passing and my vision on the ice are my biggest attributes.”

Frazer added there will certainly be some difficult decisions ahead with such a deep talent pool and only around five roster spots available —but that’s not a bad thing.

“It’s a credit to our scouting staff, how much skill we have with our young guys,” said Frazer. “We’ve got a lot of tough decisions but I think that’s what you want heading into the season.”