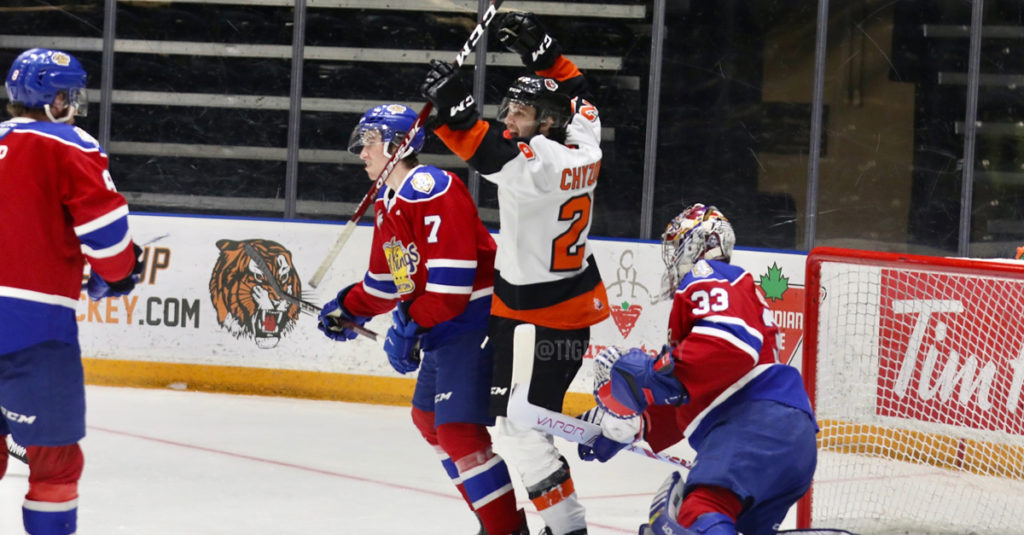 Medicine Hat, AB — The Edmonton Oil Kings travelled back to Medicine Hat to face the Tigers in the 2nd game of this weekend series.  Medicine Hat needed to win this one to even up this series.  Sebastian Cossa and Garin Bjorklund were the starting net minders.

It was a tentative start to the game, with both teams digging in and working hard, but it was Edmonton who scored first.  The talented trio of Kaid Oliver, Jake Neighbours and Josh Williams made it a 1 – 0 game.  Edmonton continued to throw their weight at the Tigers and kept the offensive waves coming. The early start would prove very important to the Oil Kings.  Jake Neighbours, who is on a 16 game point streak, made it a 2 – 0 game with an incredible hand eye coordinated shot.  The Tigers would need to shut down the Oil Kings skating lanes in the 2nd period to be successful.

Edmonton, who are 8 and 0 on the road, put on the pressure early in the 2nd period, but the Tigers were desperate to get on the board.  No penalties were issued in the game until 13:24 of the 2nd, when Matthew Robertson was sent to the box for cross checking.  Cole Clayton came up big, with a seeing eye shot from the point to make it a 2 – 1 score.  It was the 1st power play goal in this series for the Bengals.  The Tigers took 2 penalties in the 2nd frame; Shtrom for tripping and Wiesblatt for cross checking.  The Tigers penalty kill came up huge for both as Edmonton continued to put the pressure on.  Things tightened up for both teams and there was a lot of great action to end the period.

Medicine Hat started off the 3rd period with a 4 minute penalty to Corson Hopwo for high sticking.  It was a big opportunity for Edmonton but the Tiger’s penalty kill came up huge again.  Medicine Hat’s penalty problems continued when Kemp, at 6:18, and Krebs at 7:50, were sent to the box.  Edmonton capitalized on both power plays.  Josh Williams scored his 11th of the season and Matthew Robertson scored with a howitzer that Bjorklund had no chance on.  Edmonton took one more penalty before the game ended, but the Tigers could not come up with a goal.  The Tigers’ penalties took their toll and Edmonton defeated the Bengals 4 – 1.

There will be one more game in this series with the Oil Kings.  The puck will drop at 7:00 pm in Edmonton tomorrow night.