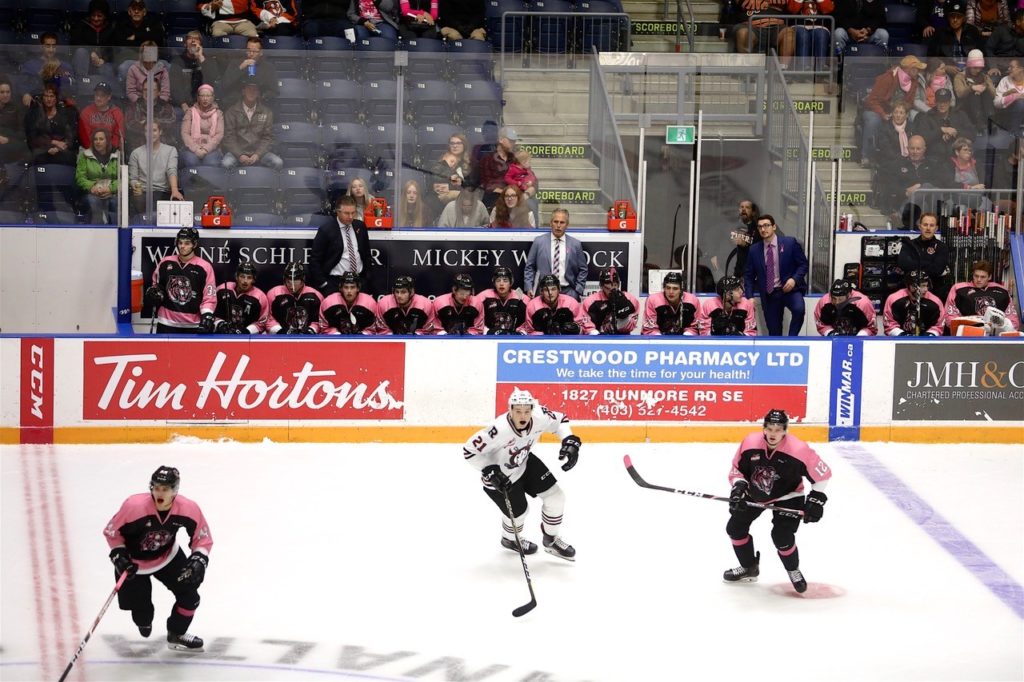 Medicine Hat, AB — The Medicine Hat Tigers defeated the Red Deer Rebels 9-1 in style during their Pink in the Rink game Saturday night at the Canalta Centre.

The Tigers scored three goals in each period of the game and Daniel Baker, Cole Sillinger and Caleb Willms each chipped in with two goals and one assist. For Baker and Willms, it was their first two goal night of their WHL careers.

Baker opened the scoring 33 seconds into the game on a play from Cole Clayton and Tyler Preziuso.

Josh Tarzwell tied the game up just over a minute later.

Baker then doubled up the lead for the Tigers just over three minutes later. Clayton picked an assist on Baker’s second goal of the evening along with Brett Kemp.

Midway through the period, Willms potted his first goal of the night to give the Tigers a 3-1 lead. Dru Krebs and Baxter Anderson combined on the play.

During a penalty kill in the second stanza, Tyler Preziuso raced up the ice with the puck and dished it off to James Hamblin who beat Red Deer’s goaltender Ethan Anders with a backhand shot.

On the power play, Hamblin combined with Sillingerto set up Ryan Chyzowski to score his sixth goal of the season. Shortly after, Sillinger made it 6-1 for the Tigers when he scored on a play from Kemp and Chyzowski.

Anders left the game after the second period after making 23 saves on 29 shots. He was relieved by Bryon Fancy.

In the final frame, Sillinger added his second goal of the night and seventh of the season. Eric Van Impe and Hamblin assisted on the play.

Late in the game, Nick McCarry scored on the power play. McCarry’s second goal of the season was assisted by Baker and Willms.

In the dying seconds of the game, McCarry set up Willms to score his second of the night. Willms’ goal was his third of the season.

Fancy stopped 8 of the Tigers’ 11 shots while Mads Søgaard turned aside 18 of 19 shots faced.

The Orange and Black are now 7-2-1-0 and they will host the 6-3-0-1 Saskatoon Blades on Tuesday night. Tickets can be purchased at the Canalta Centre Box Office or online.