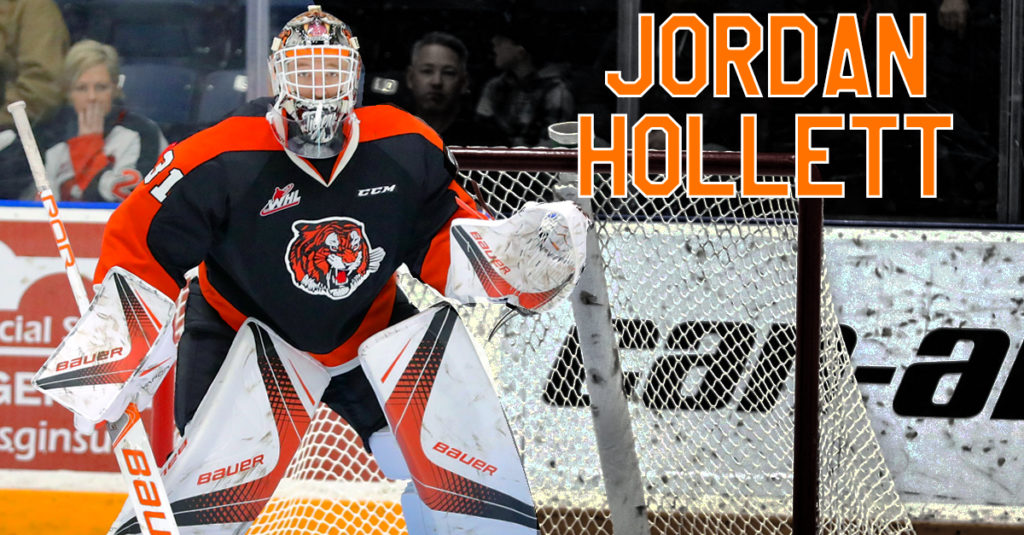 MEDICINE HAT AB — During the 2016-2017 off-season, the Medicine Hat Tigers were looking to solidify the goaltending position after being inconsistent at times throughout the previous year. The Tigers made a trade that sent overage forward Matt Bradley to the Regina Pats in return getting 18-year-old goaltender Jordan Hollett in return. Hollett had a solid season in net for the Pats as a backup, finishing the season with a 15-2-2 record, and posting a 0.901 SV% and a 2.83 GAA. NHL scouts would take notice as Jordan was selected in the 6th Round by the Ottawa Senators in the June 2017 NHL entry draft.

” That was pretty special, when I got the call it was very exciting, it’s something I won’t forget. It’s something that can motivate me to work my hardest every day to hopefully have an opportunity to play their one day.”
Jordan Hollett- Tigers goaltender

Hollett is the 5th Tigers goaltender to be selected by an NHL club since 2003. The four other Tigers goalies selected in the NHL Entry draft were:

It wasn’t the start Hollett had hoped for as he was diagnosed with mono just before Ottawa Senators training camp was about to get underway. He worked tremendously hard to get back into game shape to be ready to play. All that hard work and preparation paid off for Hollett, as he is the go-to guy in the paint for the Tabbies. The hybrid goalie has given the Tigers confidence whenever he is between the pipes. Standing at 6’5″ the towering goaltender takes up a lot of the net, has great positioning which makes it difficult for opposing teams to solve him. So far in this young WHL season, the Langley BC product has a 6-3 record, having won his last 2 games, while posting a .904 SV% and a 3.38 GGA. Jordan’s confidence and stamina is growing with each game he plays as he continues to find his groove as this season progresses.

“I’m an athletic goalie, I like to play great positioning. I use my size to try and take away as much net as possible, I play the puck as much as I can to help out the defencemen. I’m starting to feel more confident and comfortable with all the guys in the there. I’m starting to get along with the process.”
Jordan Hollett- Tigers goaltender

The Orange and Black now travel West for the first half of a home and home series with their Central Division rivals the Calgary Hitmen.  The next home action for the Tabbies is Saturday, November 11th when the Tigers play host to the Hitmen for the second half of their double dip.