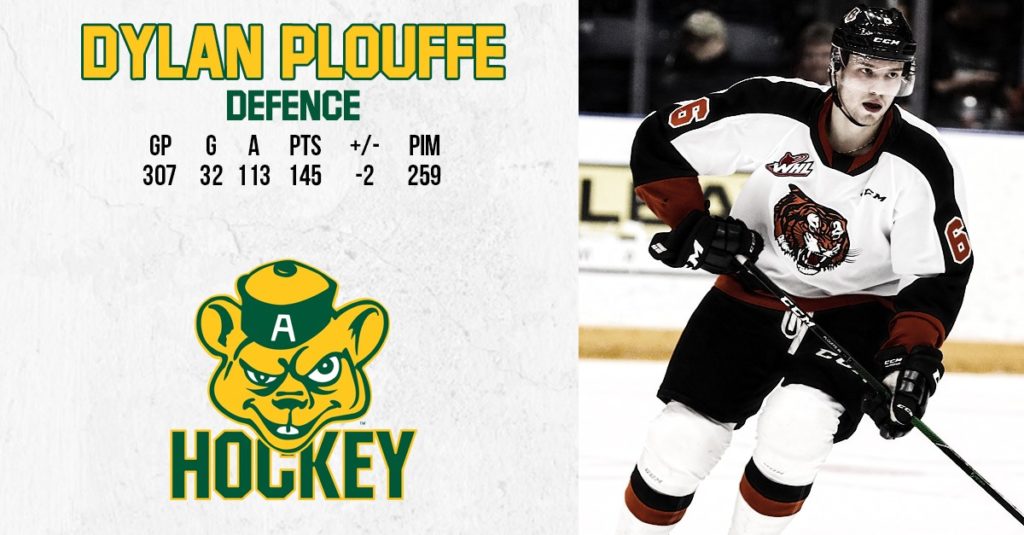 Medicine Hat, AB – After coming full circle in his Western Hockey League (WHL) career, Medicine Hat Tigers’ overage defenceman Dylan Plouffe will be attending the University of Alberta to suit up for the Golden Bears in the fall.

“For me, the decision was pretty easy. First of all, the hockey program is exceptional, having many guys graduate to play in various pro leagues. The schooling is great as well, being a top university in Canada. Then the easier decision was being able to stay at home and be around all my friends and family again,” said the 21-year-old Sherwood Park native.

Last season the Golden Bears finished first in Canada West with 21 wins, five losses and two overtime wins but they fell to the University of British Columbia Thunderbirds in the semi-finals. Six Tigers alumni suited up for the Golden Bears during the 2019-20 season – Chad Butcher, Trevor Cox, Ryan Jevne, Clayton Kirichenko, Steven Owre and Cole Sanford.

Plouffe plans on taking arts in his first year with the hopes of getting into the business program to study either finance or economics down the road. He will be the first one in his family to attend the U of A.

After being drafted by the Vancouver Giants in the second round, 29th overall in the 2014 WHL Bantam Draft, Plouffe made his WHL debut in the old Arena against the Tigers November 25th, 2014.

“My first WHL game in Medicine Hat was very cool. The old rink was something special, having the benches across from each other and feeling like the fans were over top of you. Took me a little to get in the groove of things but it was such a fun experience,” said Plouffe. “I do remember the score being 6-1 for Med Hat and me, fortunately, being + one that game. Then the next year weird enough, I score my first goal against Med Hat.”

Plouffe scored his first career WHL goal December 2nd, 2015, and a lot of his milestones during his WHL career either came against the Tigers or with the Tigers making him feel like he came full circle during his time in the league.

“That was something I’ve always thought about. I’ve had some weird milestones with and against Med Hat. My first game, first goal, 100th game, 100th assist, my 300th game and eventually my last game. Very cool to think about all the things that have happened and as weird as it sounds it was almost fate for me to play my last game with the Tigers. I wouldn’t have it any other way,” said Plouffe. 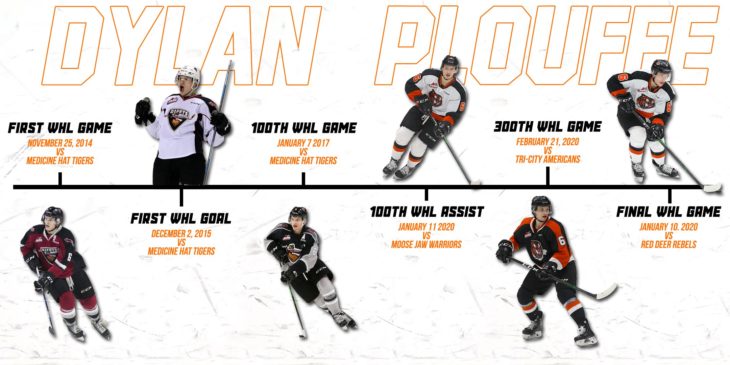 While a lot of Plouffe’s WHL history has been connected to the Tabbies, one of his most memorable experiences in the league was the 2019 WHL playoff run with the Giants. The Giants fell in overtime 3-2 to the Prince Albert Raiders in game seven of the Championship finals.

“The thing that stands out the most for me was the playoff run I got to experience my 19-year-old season. We lost in overtime in game 7 of the WHL finals,” said Plouffe. “Obviously it was heartbreaking but that run was the time of my life, going through all the things we endured with such a close group of guys was something I’ll never forget.”

After playing 272 games for the Giants, Plouffe was traded to the Orange and Black December 7th, 2019, along with 2001 born forward Lukas Svejkovsky. Adding Plouffe to a young Tigers defensive core gave the team more depth and leadership along the blue line.

“Dylan has great skill and confidence with the puck, which allows him to create offensively. He also takes great pride in his defensive play and shutting down the other teams’ top players,” said Assistant Coach Joe Frazer.

In the 35 games Plouffe played for the Tigers, he scored four goals and collected 18 assists while finishing with a plus 13 rating.

“My time in Medicine Hat was phenomenal, everybody on the team welcomed Lukas and I with open arms and it made our transition so much easier. It was such a supportive city with amazing people in the organization that made it feel like a family. All I can say is I was fortunate to land in a place that made hockey and everything around it so much fun,” said Plouffe.

Medicine Hat finished the shortened 2019-20 season in second place in the Central Divison and sixth place overall with a 41-19-2-1 record.

“We want to thank Dylan for his contributions both on and off the ice during his time here and we wish him nothing but success moving forward with the Golden Bears,” said Frazer.