Q & A WITH DYLAN MACPHERSON 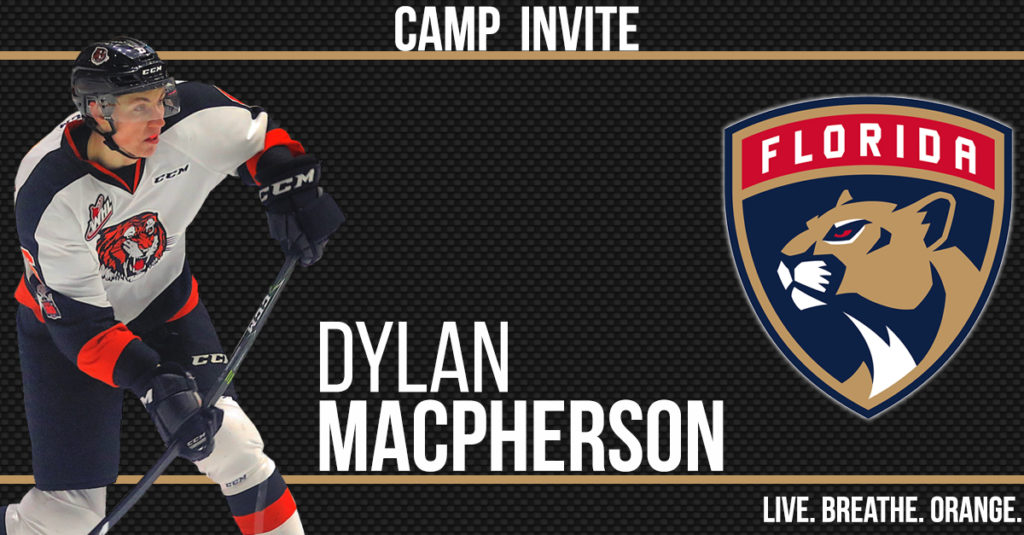 Medicine Hat, AB — Medicine Hat Tigers shut down defenceman, Dylan MacPherson, has been invited to the Florida Panthers Development Camp in the Fall.

MacPherson is the first local Tigers player to attend NHL training camp since Curtis Valk who suited up for the Orange and Black for four seasons from 2010 – 2014.

Here is a look at what it means to MacPherson to play for the Tigers and to be invited to an NHL Development Camp.

1. Growing up in Redcliff, did you dream of one day playing for the Tigers?

Yes, growing up just outside of Medicine Hat and watching guys like Darren Helm and Kris Russell play I wanted to be like them and play in the Western Hockey League.

It felt good to get listed and to be able to make the jump to the WHL in my last year of midget.

3. Do you remember your first Tigers’ game? If yes, what stands out the most from it?

Yes, I remember my first Tigers’ game and the biggest thing I remember from that game was playing against Brayden Point and how well he handled the puck and made plays.

4. After being listed, practising with the team and playing games in that season, were you even more motivated to prove yourself and make the team in the fall?

Playing 6 games in the 2015-16 season motivated me more to make the team in the fall and become a full-time player in the 2016-17 season. It drove me to have a great summer and come back to camp ready to go.

5. When you were a rookie was there any veteran players that you looked up to and helped you develop your game?

Yes, I looked up to Clayton Kirichenko the most just because of how cool and calm he was on the ice but also because of how he carried himself off the ice and all the time he spent in the gym getting better.

6. What part of your game have you focused on developing the most since the first WHL game you played?

I think I’ve worked a lot on just being calm and making the right play moving up the ice instead of rushing to get the puck somewhere that maybe isn’t the best place to put it.

7. You are more of a stay at home shut down defenceman but you reached career highs this past season scoring 4 goals and picking up 18 assists for 22 points, what do you think helped contribute to that success?

I think what has helped me with that is just being an older player in the league and pushing myself to make the smart good plays that help to contribute.

8. Is there a specific part of your game that you have been working on improving this summer for next season?

I’ve been working a lot on being tougher on my opponent below the hash mark areas and really focusing on leaning on them and not giving them easy access into our zone and letting them set up.

9. How did you feel when you officially got the invite to the Panther’s Camp?

I was excited, it’s a big jump but to get recognized and be able to go to an NHL Camp is a great feeling.

10. You have said singing with the Tigers’ is one of your proudest moments, would you say being invited to an NHL Camp is up there?

Yes, I think getting invited to camp is one of the proudest moments for sure, having the opportunity to go and play with great young players is an honour.

11. What are you looking forward to the most in attending camp?

I’m looking forward to going down there and playing fast high-end hockey with the talent that is going there.