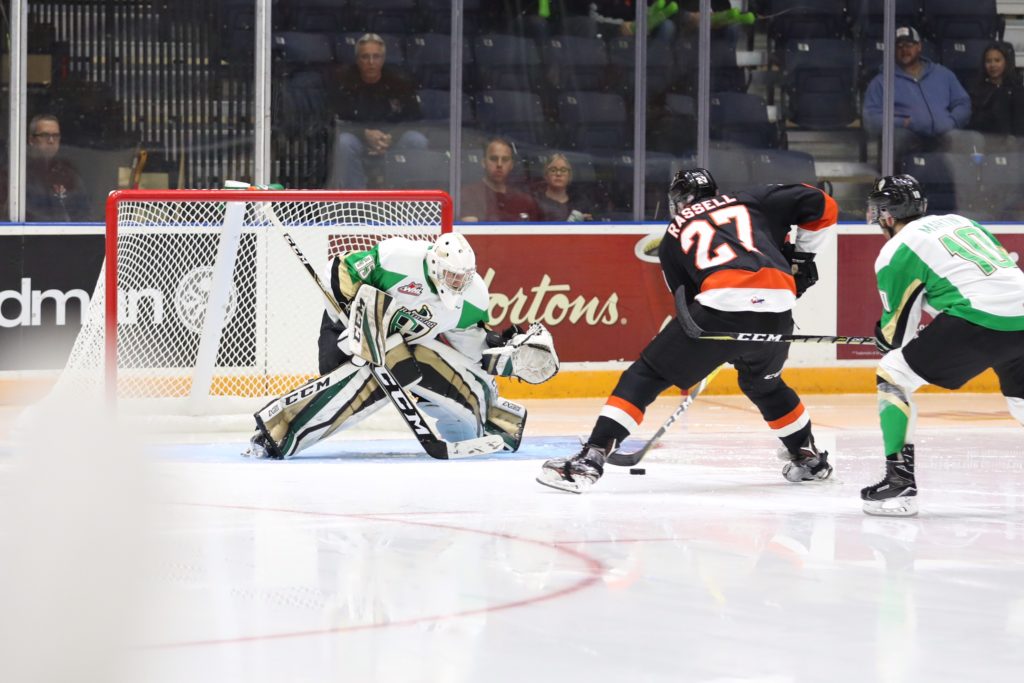 Medicine Hat, AB — The Orange and Black were playing their second game in as many nights, after doubling up on the Regina Pats 4-2, they were looking to avenge their 4-2 loss to the Prince Albert Raiders from September 30th. Jordan Hollett would earn his 2nd straight start, after stopping 19/21 for his first victory as a Tiger. Prince Albert would turn to Curtis Meger who made 30/32 saves last time these two teams met.

In the opening minutes of the game, Jordan Hollett stacks the pads and robs D-Jay Jerome keeping the game scoreless. Gary Haden would get caught for hooking sending the Raiders to the man advantage. On the power play, Cole Fonstad’s cross-ice pass finds Jordy Stallard on the back door for the games 1st goal.  James Hamblin steals the puck off Max Martin, setting up Ryan Jevne for a one-timer in the slot, it beats Meger but rings it off the bar.  Shots were even at 8-8 after one.

Right off the faceoff, David Quenneville catches the Raiders defence off guard, finding Mark Rassell as he goes backhand-forehand up and over Meger just 7 seconds into the period tieing the game at one. Prince Albert would respond right back as Fonstad beats Hollett over the shoulder for a 2-1 lead. The Raiders offence would continue to pour it on as they would score twice more just a 1:10 apart. First, it would be Zack Hayes at 12:38, then Max Martin at 13:08 to give the visitors a 4-1 lead after 40 minutes of play.

Parker Kelly capitalizes on the on the Raiders 2nd power play of the night redirecting Jordy Stallard’s point shot putting the Raiders up 5-1. That would end Jordan Hollett’s night, as Duncan McGovern came in relief with 11 minutes left to play in the 3rd. Kelly found the back of the net once one more for his 2nd goal of the period, as the Prince Albert Raiders defeated the Medicine Hat Tigers 6-1.

The Tigers will now host the Everett Silvertips on Wednesday, puck drop is at 7pm.