Game Recaps Pink In The Rink 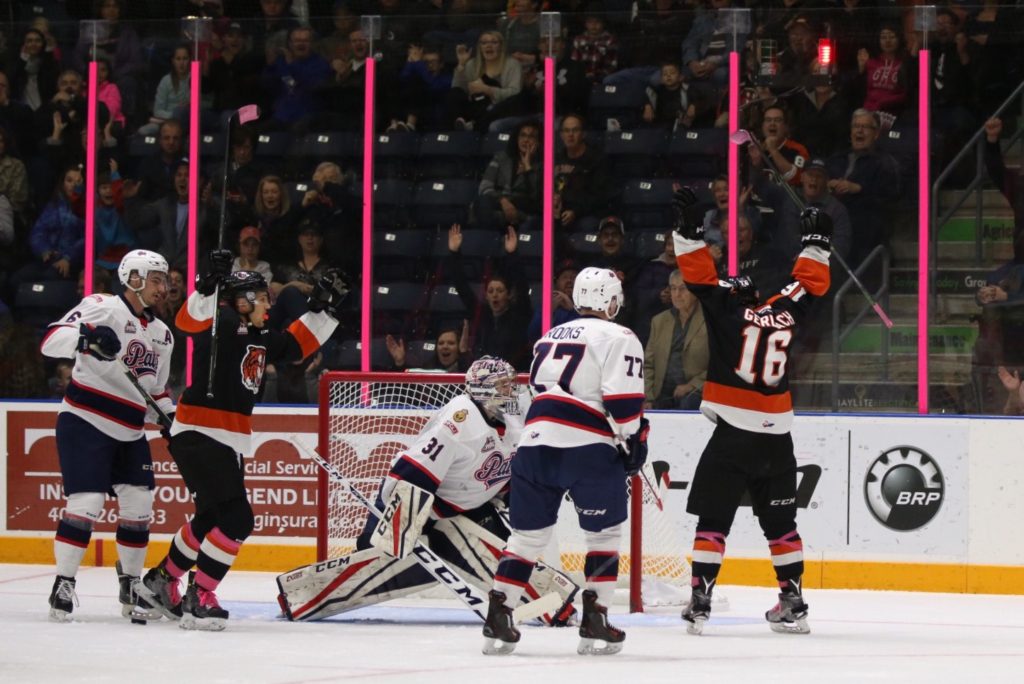 Medicine Hat, AB –– On a night where the Medicine Hat Tigers celebrated and supported those who are affected by cancer for their annual Pink in the Rink, they came up against a tough opponent in the undefeated Regina Pats. Regina came into the game on a 8-0-3-0 streak to start the season and Medicine Hat wanted to be the ones to hand them a loss in regulation.

The game showcased two of the fastest teams in the Western Hockey League and it showed in the opening frame as both teams had lots of scoring chances. Nick Schneider and Tyler Brown would be tested but the goal lights came on more often than not, something rare for the duo this season. Regina opened the scoring just over a minute into the game as Lane Zablocki buried his 3rd of the season. The Pats line of Zablocki, Austin Wagner and Jake Leschyshyn were a thorn in the Tigers side all night long. The Tigers 2nd ranked power play has gotten them out of holes before and Max Gerlach potted his 6th of the year as he tipped in a point shot by John Dahlstrom. Regina would answer as the Wagner line struck again, this time Leschyshyn scored his 7th of the year to give the lead back to the visitors. Before the period ended, Mark Rassell who has undoubtedly been the surprise of the season so far stole the puck from goaltender Brown who was out to play it and wrapped the puck into the yawning cage to net his team leading 8th of the year. The teams would remain tied for the period 2-2 heading into the intermission.

Despite outshooting the Pats in the middle frame it was quite even. The speed of the game was on full display as the two top teams in the league met for the first time this year. It was also the last game for the Tigers before they head out on a lengthy road trip Friday. The pucks at the Canalta Centre just seem to have not bounced the Tigers way this year and the second period was evident of that. Medicine Hat had chance after chance but either a post or the puck skipping over the stick was the outcome. Ryan Chyzowski however was able to find a loose puck after a Ryan Jevne shot and wrapped home his 3rd of the year to give the Tigers a lead. Then, Regina turned it up a notch to close out the period with back to back goals to gain the momentum and the lead heading into the intermission 4-3.

Playing from behind has been something the Tigers have been prolific at this season and last. They would need another comeback in order to defeat the Pats but their chances suffered a blow when Wagner scored on a clear cut breakaway, using his speed to pull away from the Tigers defender chasing him. Regina held a 5-3 lead early in the final 20 minutes. Medicine Hat’s breakout star Rassell got on the board again to cut into the lead and revive the hope in Tigers fans potting his 9th of the year.

The game featured 4 of the WHL’s elite European imports in Regina’s Filip Ahl and Sergey Zboroskiy (who didn’t play due to injury) and Tigers John Dahlstrom and Kristians Rubins. Ahl, drafted by the Ottawa Senators showed off his 6’5 frame and his speed on the Pats 6th goal of the game driving the net as teammate Rykr Cole rifled the perfect shot on net resulting in the perfect rebound onto Ahl’s stick for his 7th of the year and the eventual game winner.

The Tigers would get a bit closer scoring on the power play once again with a David Quenneville blast from his ‘sweet spot’. However it was for not as the Tigers desperately tried to get back into the game pulled their goalie, but a quick turnover in the offensive end led to an empty netter and insurance, sending the visitors home undefeated and snapping the Tigers 4 game streak in the process.

The Tigers have the next week off before heading on a 5 game road trip which leads to Red Deer, Edmonton, Prince George, Kamloops and Kelowna. Make sure to keep it locked to Tigers twitter for all your in-game updates while the boys are away from home!