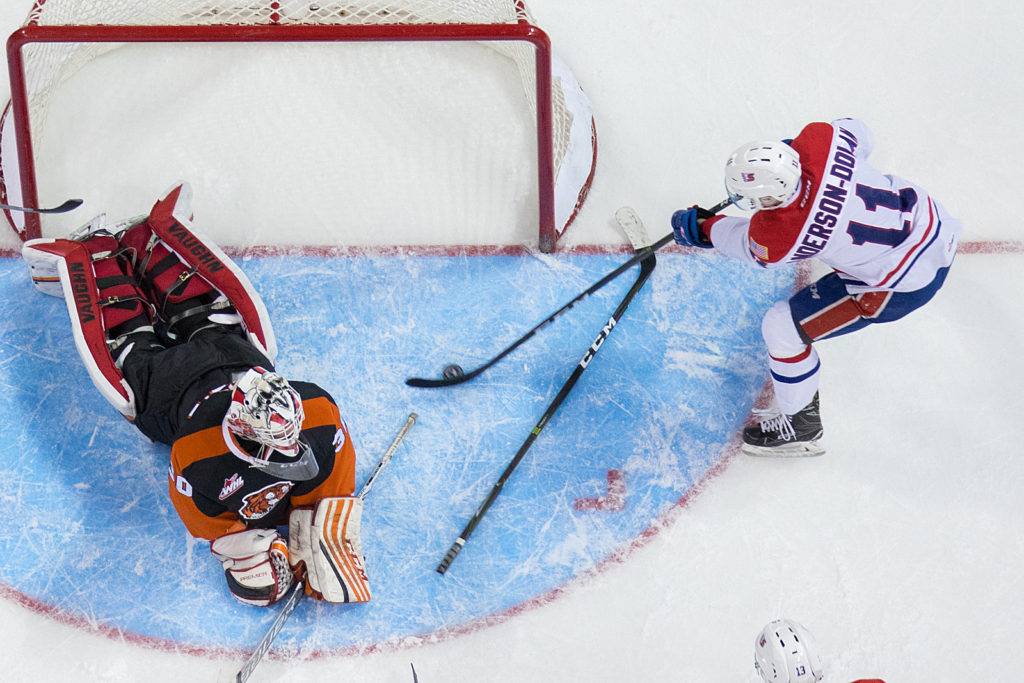 SPOKANE, WA. – The Medicine Hat Tigers traveled south of the border to try and keep the streak alive as they made their way to the home of the Spokane Chiefs. Looking to spoil ‘school night’ the Tigers got out to a quick start but couldn’t hold off the Chiefs power play.

The Spokane Chiefs bounced back from a 2-0 first period deficit on Friday night at Spokane Arena, defeating the Central Division-leading Medicine Hat Tigers, 5-3. Second-year forward Jaret Anderson-Dolan led the way with his third hat trick of the year.

The Tigers jumped out to their early lead with back-to-back goals late in the first period. Former first round WHL Bantam Draft selection James Hamblin scored his 14th of the season at the 15:53 mark off assists from Chad Butcher and Kristians Rubins. Montreal Canadiens prospect Matthew Bradley earned his 23rd of the season at the 18:46 mark of the period with a powerful drive to the net from the left wing.

Down 2-0 to start the second, the Chiefs turned it on. Winnipeg native Hayden Ostir broke through with his fifth of the season on a sharp angle from the left wing, squeaking the puck past Medicine Hat netminder Michael Bullion at the 2:25 mark.

Anderson-Dolan scored his first of three power play goals just over six minutes later, tapping in a cross-crease feed from Riley Woods for his 25th of the season.

The draft-eligible forward from Calgary picked up his second of the night to give the Chiefs their first lead, slamming home a rebound at the 12:34 mark of the middle frame. Woods and Keanu Yamamoto earned assists after Kailer Yamamoto extended the offensive chance earlier in the shift, denying a Tigers breakout pass to keep the puck in the zone.

The Tigers bounced back to tie it at 3-3 early in the third period as 1999-born forward Tyler Preziuso took advantage of a breakdown in front of Chiefs goalie Dawson Weatherill to slide in just his third goal of the season.

Anderson-Dolan would not be denied, sending the hats flying at the 11:52 mark, picking the top-left corner from the left wing after a feed from Kailer Yamamoto to make it 4-3 in favor of the Chiefs.

The Spokane Arena crowd of 8,564 was finally able to exhale after Keanu Yamamoto slid in his 19th of the season with 1:15 left in regulation as Bullion got caught trying to get off the ice to give Medicine Hat an extra attacker. Anderson-Dolan and rookie defenseman Ty Smith earned assists on the play.

Weatherill finished the game with 31 saves on 34 shots faced, including 12-of-13 in the third period, while Bullion made 29 saves on the same number of shots. The Chiefs were 3-for-7 on the power play and 3-for-4 on the penalty kill.

Medicine Hat will cap off their road trip in Kennewick, Washington to take on the Tri-City Americans and finish off the US Division for the 2016-17 season. After the Saturday night game the Tigers head home to take on Prince Albert at the Canalta Centre.