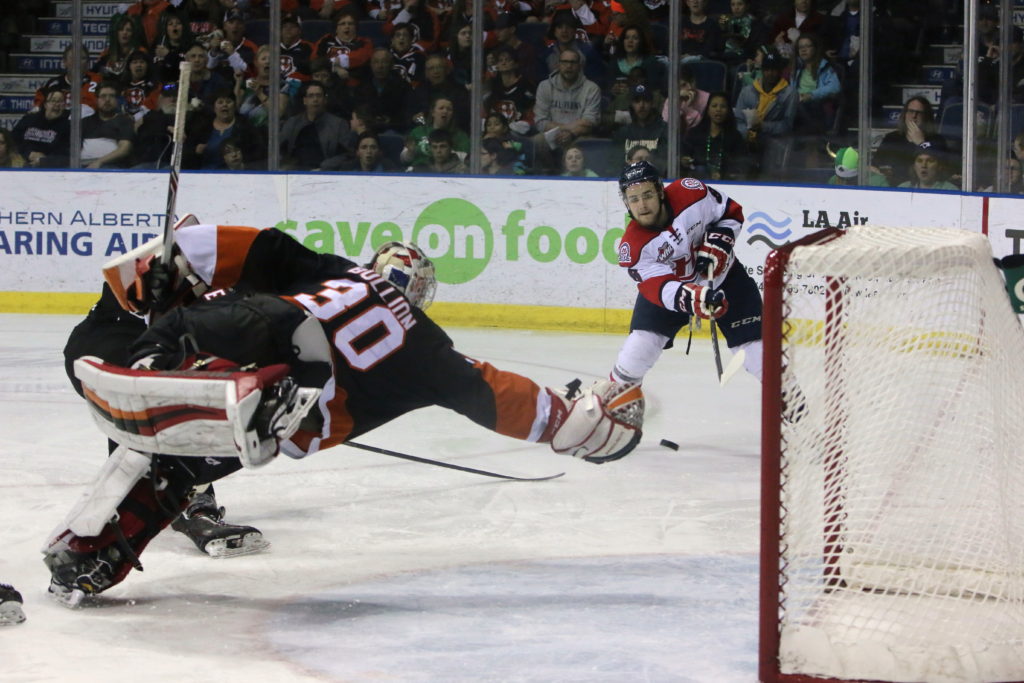 Lethbridge, AB –– The Medicine Hat Tigers had their second chance to reach 50 wins on the season Friday night against their rival, the Lethbridge Hurricanes. It was a team effort from the start as Medicine Hat controlled the play. Michael Bullion got the start in net as the Tigers welcomed back Duncan McGovern to the lineup, brought in to backup Bullion after Nick Schneider was scratched. Friday night was the first showing of what the playoff bound Tigers will look like heading into next weekend, a showing of heart, teamwork and dedication.

It was a tight game which ran back and forth in the opening frame as shots were even at 2-2 at the 8 minute mark. Stuart Skinner and Bullion stood tall in net. Lethbridge attempted to play a physical game but the Tigers used their agility and speed to avoid checks and continued to put pressure on the Canes. Joining the Tigers on the trip were 50 screaming and rambunctious Tiger fans who crammed into 2 buses to watch their boys attempt to get their 50th win. The boys in orange and black would give them something to cheer about on an early power play as John Dahlstrom potted in a rebound for his 30th of the season and an early 1-0 lead. Before the period ended and with Zach Fischer just coming out of the penalty box, Clayton Kirichenko blocked a pass which went to a streaking Fischer who found James Hamblin as he potted his 20th of the year and the Tigers took a 2-0 lead into the intermission.

Heading into the second period the Tigers continued their controlling game, feeding line after line of pressure. But with every few lines of good chances the Hurricanes would come down the ice with a good chance of their own, however Bullion and the Tigers defense would hold it down and keep their 2-0 lead. Starting the period however Matt Bradley was called for a 5 minute major for spearing with 3 seconds left in the opening period. Medicine Hat had a huge penalty kill and carrying the momentum forward. After the kill, Chad Butcher would pot his 27th of the season and a 3-0 lead. Medicine Hat would do an excellent job on the penalty kill and their power play was potent. Medicine Hat would be on the bad end of a unlucky break. Ryan Bowen stole a puck shorthanded from Steven Owre and went down on a breakaway. Bullion made the initial stop but a sliding Owre accidentally knocked the puck into the net for a 3-1 score.

The Tigers would cap off the period with Mark Rassell’s 35th of the year. Rassell took a pass from Ryan Chyzowski after he and line mate Ryan Jevne hemmed the Canes in their end. Rassell snapped a shot short side on Skinner. The puck hit the post, hit Skinner in the back and barely crossed the goal line. After a short review, the goal counted and gave the Tigers a 4-1 lead into the third.

The final frame was an undisciplined one for the Tigers as they handed the Hurricanes 5 of their 8 power plays. But solid efforts from a handful of players including Mason Shaw, Dylan MacPherson, Jordan Henderson and James Hamblin to name a few prevented the Canes power play from any solid chances. Those power plays against made Michael Bullion a busy person. He stopped all 17 shots he faced in the final period, with majority of those coming off the Hurricanes power play. Medicine Hat would increase their lead with James Hamblin potting his 2nd goal of the game and 21st on the season solidifying a 5-1 victory for the Tigers, their 50th win on the season.

The game marked the 4th time in franchise history the Tigers reached 50+ wins in one season.

These two teams close out the regular season Saturday night at the Canalta Centre.