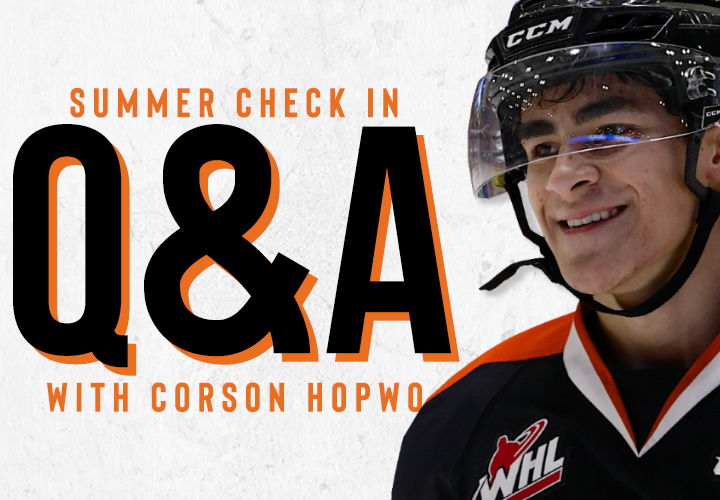 Medicine Hat, AB — During the 2018-19 season, rookie Corson Hopwo was able to take a big step forward in his development.

The 18-year-old Duncan, BC native earned a regular spot in the Medicine Hat Tigers’ lineup as well as the opportunity to play top line minutes with veteran forwards James Hamblin and Tyler Preziuso.

Hopwo finished his rookie campaign with 17 points (6 goals and 11 assists) in 59 games played which he will look to build off in his sophomore season. Below he reflects back on his rookie season while sharing what he has been up to so far this summer.

Q: What is your favourite memory from this past season with the Tigers?

A: My favourite memory of this past season, was when we volunteered at the Medicine Hat News Santa Claus Fund Intake. The feeling of knowing that you’re making kids’ Christmas dreams come to life is truly amazing.

Q: Were there any veteran players that you looked up to this season and helped you develop your game? If so, who and why?

A: For myself, I think all veterans were great role models; on the ice, in the gym, or even outside the rink, I learned a ton from a number of guys. However, Jimmy was one of the veteran players I looked up to the most. His commitment to working hard on and off the ice is second to none, he’s a true professional.

Q: Thinking back to training camp, what is the one thing you think you have improved the most during this past season?

A: My overall speed and quickness is one thing I felt improved over the season. Skating is a big part of hockey if you’re slow it makes it a lot harder to make plays and produce. With being in one of the fastest junior leagues in the world, I wanted to improve on my first three steps, and even though I’m still not where I want to be, I believe I accomplished that.

Q: What are you focusing on improving for next season?

I need to focus on my strength for next season. Being stronger will help my shot and speed; becoming faster and adding a harder/more accurate shot to my play is one of many things I must work on to have a good successful year.

Q: What is your training regime like in the summertime?

I train 4 times a week at Prime Sports Performance and Kinesiology; I have been training there for 6 years now, and it has become a huge part of my summers at home. When not at Prime, I either do a little bit of cardio or do some quick feet drills. Additionally, throughout the summer, I have ice sessions with a group of guys to work on close/in tight skill.

Q: Do you play any summer sports?

When I was younger I played baseball, unfortunately, I had to stop because of hockey; now I do a lot of water sports and love to hike. The Island is beautiful and there are plenty of awesome hiking spots. With that being said, my goal this summer is to try and get a few rounds of golf in as well.

Q: Do you have plans for a summer vacation?

My family and I just got back from Disneyland, which was pretty cool; and  I am going to my buddies cabin on Muskoka Lake for a week in July. Vancouver Island is a beautiful place during the summer, so I don’t feel I need to go too far from home.

Q: What is the best part of being home?

The best part of being home is seeing family and friends. Even though you’re surrounded by loving billet parents and 22 best friends during the season, it’s tough not seeing your family months on end. Being back is a nice break and I’m excited for the summer ahead.

Q: What do you miss the most from the Hat?

Seeing all the guys, and being on the ice every day. I feel summer has already been too long, and I’m excited to get back to see everyone and get thing’s going.

Q: What are you looking forward to the most for this upcoming season?

Coming into my second year I am looking forward to lots of things; however, seeing everyone and getting back on the ice is one of the most exciting things. With Silly and other younger guys coming in, I believe we are going to have a pretty solid/skilled team, and I can’t wait to start the season and see how things play out.

Hopwo and the Tigers will be returning to the ice in the fall for the 50th anniversary season. Season ticket renewals are currently taking place and season ticket holders have until June 14th, 2019, to renew their seats for what should be an exciting season of Tigers hockey.