SUMMER CHECK IN WITH DANIEL BAKER 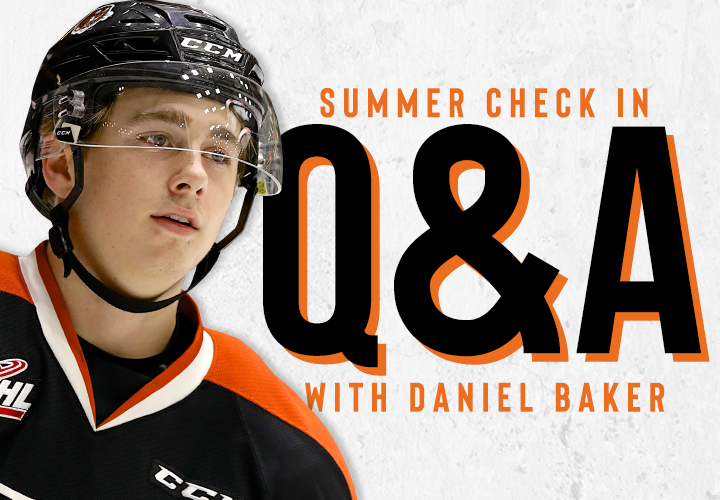 The 18-year-old Edmonton native had played up for the Tigers in 11 regular season games as an affiliate player in 2017-18 and he built off of that in his rookie season with the Tigers. Baker scored two goals and picked up 15 assists in 68 games played.

Below Baker reflects on his rookie campaign and talks about what he has been up to this summer.

Q. What is your favourite memory from this past season with the Tigers?

My favourite memory of the season was finding out we clinched a playoff spot which was exciting for our whole team.

Q. Were there any veteran players that you looked up to during the season and helped you develop your game? If so, who and why?

Dylan and Linus were guys that I could look up to on and off the ice. They both are great skates and were leaders for our defence.

Q. Thinking back to training camp last year, what is the one thing you think you have improved the most during this past season?

As the season went on, I became more confident which helped me make stronger plays with the puck and to be more sound defensively.

Q. What are you focusing on improving for this upcoming season?

Lower body strength and quickness is what I have been working on improving the most as well as my shot from the point.

Q. What is your training regime like in the summer?

Q. Do you play any summer sports?

My buddies and I often play basketball and I also enjoy water sports.

Q. Do you do anything for summer vacation?

I have out to Seba Beach at Wabuman Lake where my family has a cabin and we often spend the weekend there.

Q. What is the best part of being home?

Getting to spend time with family and friends that I rarely get to see throughout the season.

Q. What do you miss the most from the Hat?

I miss all of my teammates and my billet family as well as playing games in front of the home crowd.

Q. What are you looking forward to the most for this upcoming season?

I’m looking forward to meeting the new guys and I am excited to get back on the ice with everyone. It should be a great year.

Baker and the Tigers will be back on the ice later this month for their training camp. Season tickets for the 50th anniversary season are on sale now.