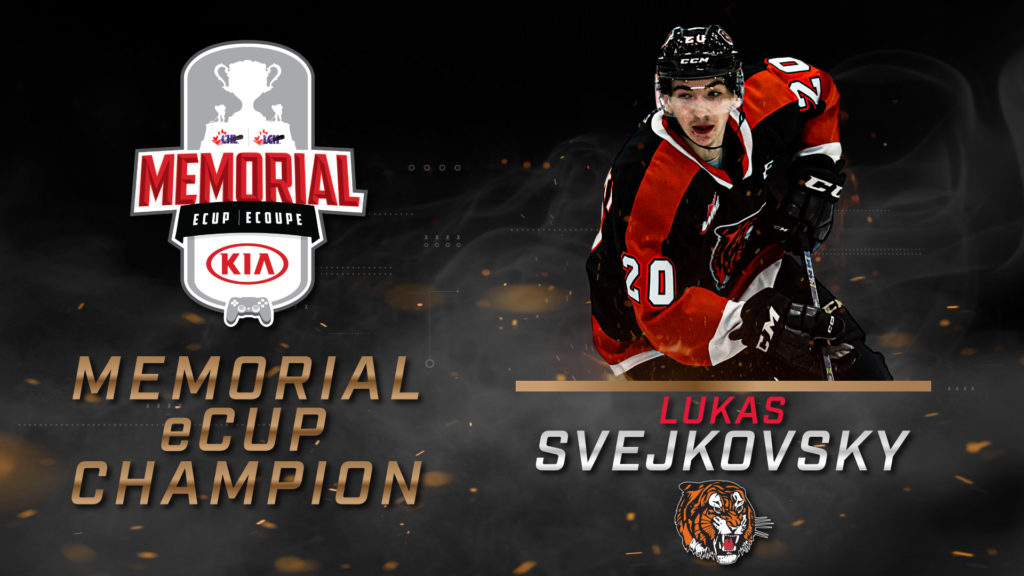 Calgary, Alta. – Lukas Svejkovsky and the Medicine Hat Tigers made history on Thursday night, becoming the first ever winners of the Canadian Hockey League’s Memorial eCup presented by Kia.

Svejkovsky was dominant from start to finish in the inaugural Memorial eCup as he finished the tournament undefeated in eight games, including knocking off the Quebec Major Junior Hockey League’s Saint John Sea Dogs and Riley Bezeau in two consecutive games to claim the best-of-three championship series.

As part of the event, the CHL will be making a donation of $1,000 to a charity of Svejkovsky’s choice. Kia Canada also provided a gift card of $1,000 for the tournament winner, which Svejkovsky has chosen to donate back to a second charity. The two charities Svejkovsky has chosen to support are both of great importance to the Tigers – the Medicine Hat Santa Claus Fund and the Medicine Hat Women’s Shelter Society.

A product of Point Roberts, Wash., Svejkovsky pounced early in Game 1 on Thursday night, scoring six times in the first period before going on to a decisive 10-0 victory, forcing Bezeau and the Sea Dogs against the wall.

Game 2 proved a much different affair, with the first goal of the game coming with only 4:05 remaining in the second period of play as Kemp broke a 0-0 tie.

Sillinger struck early in the third period to extend the Tigers lead to 2-0 before Bezeau got on the board with his own eCharacter to make it a 2-1 contest. But Svejkovsky quickly extinguished any hopes for a comeback, recording a goal with his own eCharacter. Locker tallied once again to round out the scoring in a 4-1 win.

Svejkovsky and the Tigers finished the event with a perfect 8-0-0 record. Along the way, he knocked off WHL Alumni guest Zach Hodder, Rhett Rhinehart and the Saskatoon Blades, Zachary Roy and the Hamilton Bulldogs, Danny Katic and the Saginaw Spirit, and Ty Collins and the Mississauga Steelheads, before Thursday’s championship win over Saint John.

Through eight games, Svejkovsky recorded 43 goals for while only allowing 11 goals against.

Selected by the Pittsburgh Penguins in the fourth round (108th overall) of the 2020 NHL Draft, Svejkovsky has split his time in the WHL between the Vancouver Giants and Medicine Hat Tigers. In 119 career WHL regular season contests, he has collected 64 points (27G-37A), adding another 13 points (4G-9A) in 22 WHL playoff games.

The Medicine Hat Santa Claus Fund is a charitable organization serving Southeast Alberta. It strives to ensure those less fortunate in the community experience the joy and warmth of the holiday season by providing low-income families with a full Christmas supper and toys for their children at Christmas.

The Medicine Hat Women’s Shelter Society supports individuals impacted by family violence by providing them with a safe shelter, education, advocacy, and access to community resources.