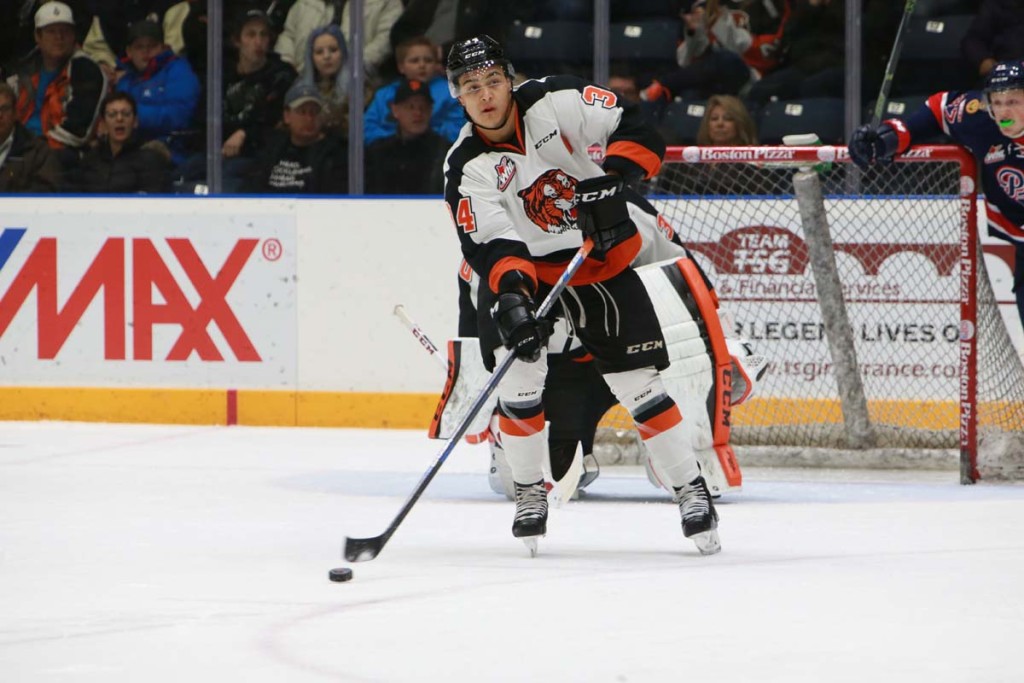 Medicine Hat, AB – For Tigers defenceman Clayton Kirichenko, his 2015-16 season was eventful. The now 20 year old battled a mid-season trade, injuries and the roller coaster end to his year. As 1 of 2 potential 20 year olds on the Tigers blueline, Kirichenko knows that he will be counted on to provide a solid, rounded game in order to lead the Tigers back to the post season.

The Sherwood Park, Alberta native came to the Tigers after spending a season a half with the Vancouver Giants. Kirichenko was sent to the Tabbies as part of the Trevor Cox trade and was definitely no stranger to changing uniforms. After his first year in the league with the Saskatoon Blades, Kirichenko was sent to the Giants. His 2015-16 was a career year, with increased ice time and opportunities, Kirichenko recorded highs in assists and points (20 points in 36 games as a Tiger). He had a good first impression on Tigers fans as well, recording 7 points in his first 5 games after the trade.

“The transition was very smooth coming to Medicine Hat. The guys we have in the locker room made it very welcoming for me, which made it easy,” said Kirichenko from his home in Northern Alberta. “I am very excited to finish my WHL career as a Tiger and get back to Medicine Hat for the season.”

The Tigers leadership core won’t change heading into the new season as last year’s assistant captains Chad Butcher and Steven Owre are set to finish out their lengthy Tiger careers and Alex Mowbray, who wore a letter for parts of the season, is also set to battle it out in training camp. However, the largest void will be the vacancy left by former Captain Ty Stanton, a vacancy Kirichenko would like to fill.

“You can never truly replace a guy like Ty Stanton. He left a lasting impression on me, the guys in the room and the City of Medicine Hat, a true warrior on the ice. I want to be able to log those minutes, play big roles on the PK and PP and be a leader this season. My experiences in the league should allow me to fill that void and lead the Tigers to the post season.”

In the Western Hockey League, 20 year olds (overage players) are highly coveted and are normally the club’s best players, drafted or not. The pressure for a 20 year old to perform in their final year of major junior can be higher than first year players. It is a challenge that all 20 year olds must face, some take it in stride, like Kirichenko, who plans on putting the pressure aside,

“I don’t feel any pressure on me as a 20 year old. I think if you work hard and do the right things on the ice (focus on the things you can control), then everything will take care of themselves. Good things will happen and you will perform better.”

Heading into training camp, which kicks off at the end of the month, the Tigers roster won’t see much overhaul. 19 players are eligible to return, not including recently signed Swede John Dahlstrom, making it a very competitive camp. Kirichenko will lead a defense core that has over 606 WHL games under their belt, with ‘Clay’ leading that number with 167 career games.

“Being a more experienced guy on the team, you have to have a good balance between being both vocal and leading by example on and off the ice. Being a leader is about setting the standards, the culture and morale. Show players the ropes of the WHL; continue to hold your teammates accountable. The season has lots of ups and downs and as a leader you need to keep the focus going forward and in a positive direction.”

As the 2016-17 season rapidly approaches, Kirichenko and the rest of the Tigers are itching to get back to work, to continue their momemtum from the end of last season. A new assistant coach, some European flare and a large returning core, has the Medicine Hat Tigers primed for a breakout year.

“I am excited to get back to the ‘ Hat and spend time working with the boys. We had a memorable run last year and we want to build on it, become better and make the playoffs, ultimately win the league Championship.”