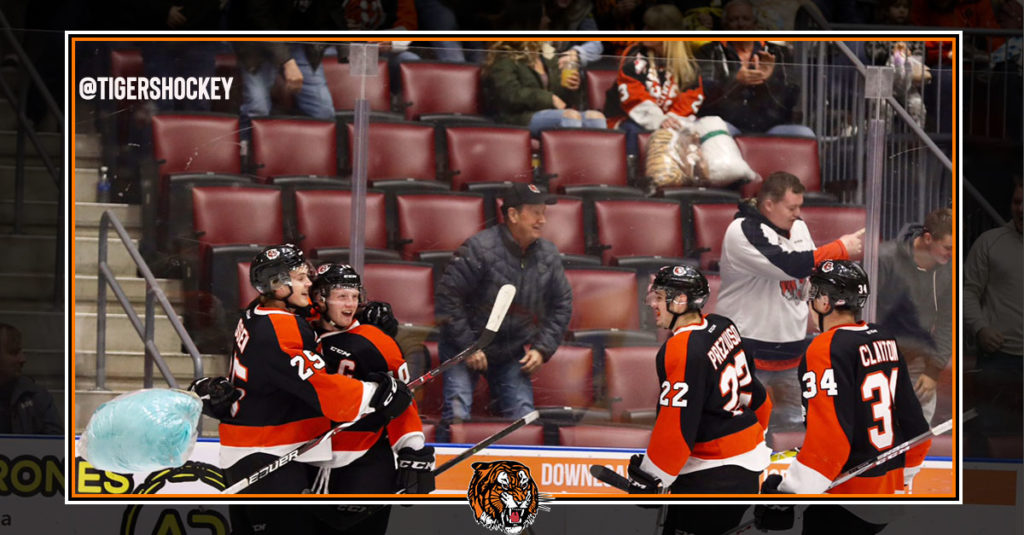 Medicine Hat, AB — Despite scoring the opening goal of the game to send the teddy bears flying onto the ice during the Annual Teddy Bear Toss game, the Medicine Hat Tigers fell 3-1 to rivals, the Lethbridge Hurricanes.

With just over five minutes of play left in the opening frame while the Tigers were on the power play, goaltender Mads Sogaard fed the puck up the ice to Captain James Hamblin. Hamblin walked into the Hurricanes’ end and beat netminder Reese Klassen to send the bears flying.

The Tabbies went to the dressing room leading 1-0 after 20 minutes of play.

In the second period, the Hurricanes pushed back scoring three unanswered goals. Jordy Bellerive scored to tie the game up at one before both Jake Leschyshyn and Dylan Cozens scored on the Canes power play to seal the 3-1 victory.

The Orange and Black fought hard in the third period looking to cut the lead but were unable to get any more pucks past Klassen. Klassen stopped 31 of the Tabbies’ 32 shots while Sogaard made 23 saves on 26 shots faced.

Medicine Hat is now 12-13-1-2 and will travel to Regina to face the Pats in a Sunday afternoon contest. The puck will drop at 3 PM MT at the Brandt Centre.