THE UNEXPECTED JOURNEY: RUBINS’ ROAD TO THE NHL 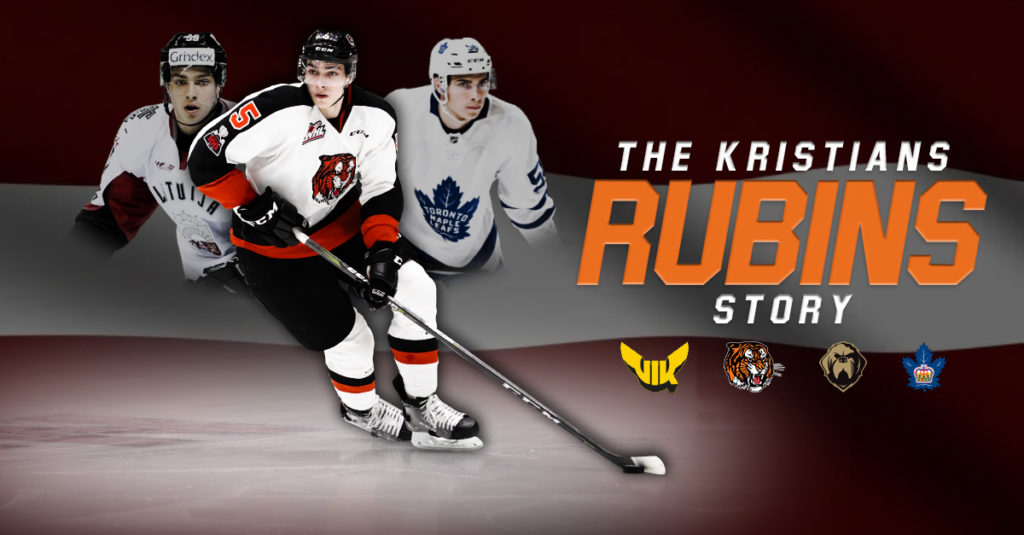 Medicine Hat, AB – Kristians Rubins was drafted by the Medicine Hat Tigers in the 2016 Canadian Hockey League (CHL) Import Draft and since then he has called Canada his second home.

Rubins played two seasons with the Tigers before finding success within the affiliate teams of the Toronto Maple Leafs.

Moving away from home to play hockey was nothing new for the 6’4 Latvian defenceman since he had moved away for the first time at age 15 to play for VK Vasteras HK in Sweden. During his three years with Vasteras, he learned to read and speak Swedish while finishing school.

Before his 19-year-old season, Rubins was drafted by the Tigers 16th overall in the CHL Import Draft. Prior to the draft, he admitted he hadn’t heard of Medicine Hat or the Tigers but relied on google to learn about the culture, the weather and history while watching old Western Hockey League (WHL) games on YouTube.

“Honestly before I got there, I did not know what to expect, I was a little nervous. When I met Shaun Clouston, the head coach of the Tigers at the time, and my billets, who were really nice and supportive, I understood that I was in the right place for my future development and I was surely going to enjoy my time there. And I absolutely did,” said Rubins.

While navigating a new country can be difficult, Rubins recalls that the transition from playing in Sweden to Canada was not easy, especially since the WHL still had their 72 game format.

“In the WHL, you played 72 games in the regular season and then playoffs, although in Sweden the all time high in the regular season in terms of games was about 50,” said Rubins. “They don’t play as many games as they do in North America. Although I was really lucky with the organization I got in, the Medicine Hat Tigers organization, teammates, staff and obviously billets helped me a lot so I could perform at my best.”

When looking back at his time in Orange and Black, Rubins’ favourite memory is the 2017 playoff run even though the Tabbies were eliminated in game seven of the second round by rivals the Lethbridge Hurricanes.

“The fans were amazing, it was also my first season in North America where I really understood how important, how tough, and at the same time how exciting the playoffs were. We were also able to finish first in the Central Division, and we raised the banner in my second year at the first home game, it also was pretty awesome and a memorable moment,” said Rubins.

After graduating from the WHL in 2018, Rubins signed his first professional contract with the Newfoundland Growlers of the East Coast Hockey League (ECHL), who are an affiliate of the Maple Leafs. The Growlers were a new franchise and the 2018-19 season was their inaugural season.

“The style of the play and travel was pretty similar. I also got lucky to play with my former Tigers teammate Matt Bradley, so that made the transition a lot easier,” said Rubins.

Rubins and Bradley cemented their place in Growlers’ history by scoring the first two goals in the franchise’s history. The Growlers defeated the Florida Everblades 3-2 in their game and Rubins scored the team’s first goal in the first period, and Bradley added the second goal in the third period.

“It’s funny because when I scored the goal I did not fully realize it was the first ever franchise goal. Obviously, I knew the team was new and it was the Growlers franchise’s first game and first goal, but it all really came to me after the game when the puck and my stick were taken to the Growlers office to be put on the wall. That’s when it really hit me! Definitely, something that will always be in my memory,” said Rubins.

The Growlers finished their season with a 43-21-4-4 record and in first place in the North Division. They went on to win the Kelly Cup and be named the ECHL playoff champions.

“It was an unbelievable year, we had such a great team, so many ups and downs as a team and organization but we always stuck together,” said Rubins. “There was never really a moment when we did not believe in ourselves. We knew that we were a good team and we knew that we could win the Kelly Cup. It was my first ever championships in professional hockey, and I was lucky to be apart of it and share the moment with the rest of the team. The fans, staff, organization itself and the City of St. John’s will always be in my heart.”

During his time with the Growlers, Rubins ended up signing a contract with the Toronto Marlies, the American Hockey League (AHL) affiliate. He made 15 appearances with the Marlies and collected three assists while playing 56 games with the Growlers and putting up 18 points (2G, 16A).

For the 2019-20 season, Rubins played full time in the AHL for the Marlies. He made 47 appearances and collected 14 points (2G, 12A) before the season ended earlier due to the COVID pandemic.

Even though Rubins believed he did not have the best start to the season with the Marlies, he signed his first NHL contract with the Maple Leafs at the end of March.

Looking back at the 2016 CHL Import Draft, Rubins did not anticipate at the time that he would be calling Canada his second home for the next foreseeable future.

“I am so happy now that it turned out to be my second home. I love Canada and I feel like I am at home when I am there,” said Rubins.