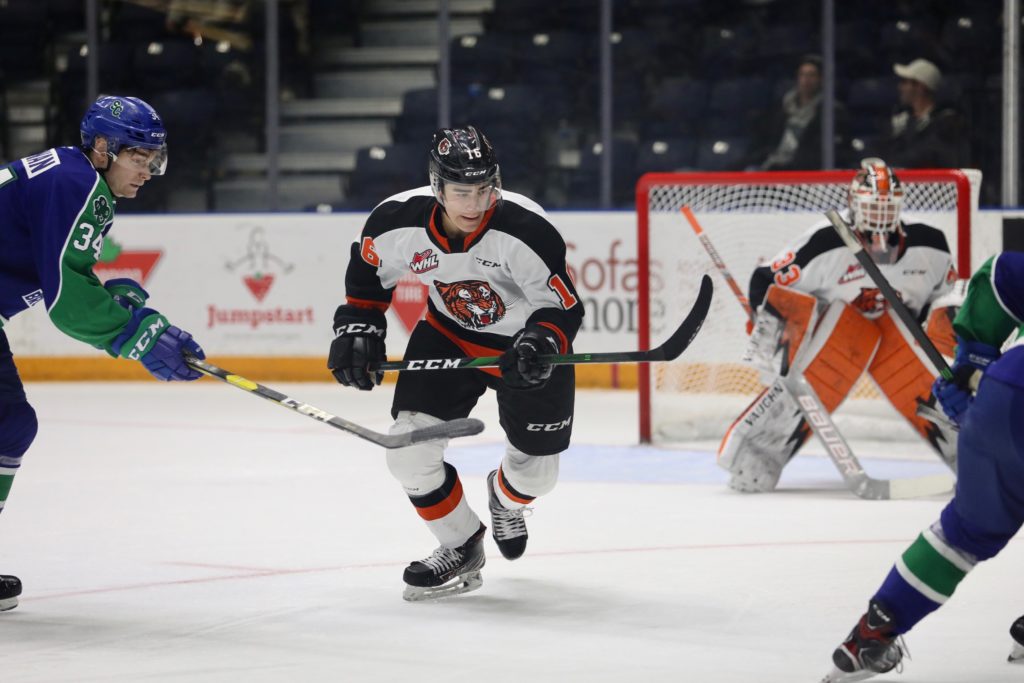 Medicine Hat, AB — The Medicine Hat Tigers came out with a fury Tuesday night at the Canalta Centre scoring five unanswered goals in the first period before adding another pair to defeat the Swift Current Broncos 7-0.

Hopwo scored twice forty-two seconds apart to give the Tigers an early 2-0 lead in the game. His first goal of the night was deflected off a Broncos defenceman into the net. It was assisted by Hamblin and Cole Clayton. Shortly after while there was traffic in front of the Broncos’ net, Hopwo scored his second of the night and 13th of the season. Hamblin and Svejkovsky collected the assists on the play.

Midway through the period, Hamblin combined with linemates Hopwo and Svejkovsky to score his 29th goal of the season and make it 3-0.

Less than two minutes later, Daniel Baker extended the Tigers’ lead when his shot went off the post and in. Baker’s goal was his 12th of the season and it was assisted by Eric Van Impe and Caleb Willms.

In the last three and a half minutes of the period, Cyle McNabb played the puck to Nick McCarry behind the net and McCarry wrapped the puck around the net to score his 9th goal of the season.

Broncos goaltender Isaiah DiLaura stopped 35 of the Tigers’ 42 shots in the contest.

Medicine Hat is now 31-14-1-1 and they will travel to Swift Current Friday for a rematch with the Broncos. After Friday’s game, the Tabbies will return home to host the Brandon Wheat Kings Saturday night. Saturday’s game is a NewRock Developments Chuck a Puck night in support of Medicine Hat Adaptive Sport and Recreation. Tickets for Saturday’s game can be purchased at the Canalta Centre Box Office or online.