TIGERS ADVANCE TO 2ND ROUND WITH 3-2 VICTORY 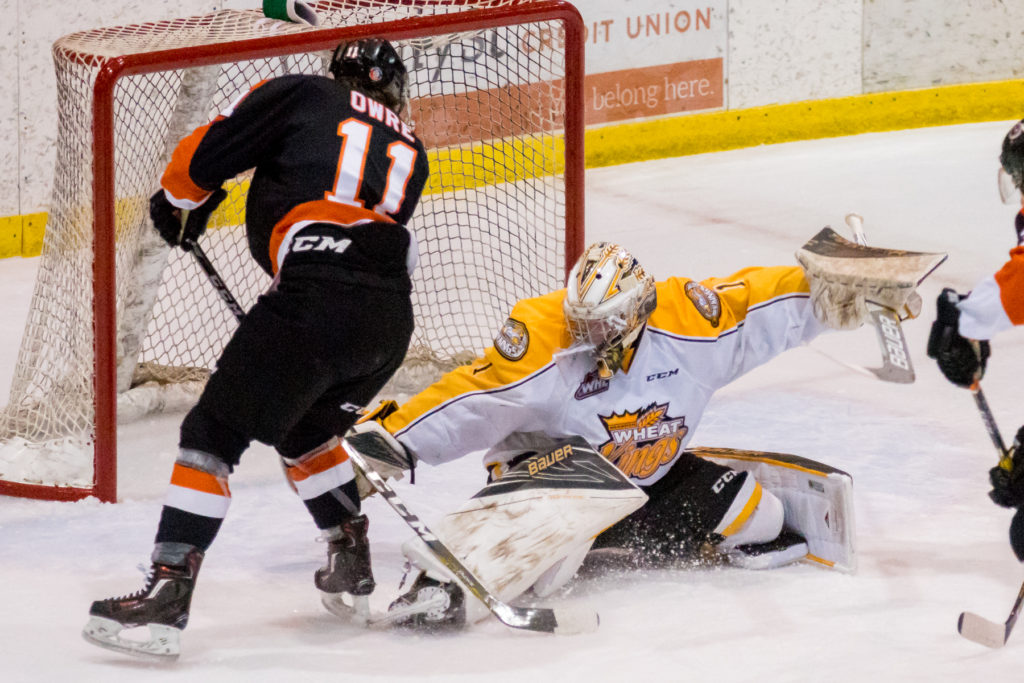 Dauphin, MB — The Medicine Hat Tigers had the opportunity to eliminate the defending WHL Champions on Wednesday night. With three straight victories the Tigers had the momentum and things seemed to be rolling in their final game in Dauphin. Medicine Hat got big performances from their core group including David Quenneville and Michael Bullion. Bullion held a shut out through two periods along with his counterpart Logan Thompson. In the end the Tigers would hang on, moving on to the second round of the post season for the 13th time in the past 15 years.

In the opening period the Tigers and Wheat Kings battled in front of another capacity crowd in the town of Dauphin. Only 3 shots on goal made there way onto the net combined in the first 8 minutes furthering the tightly contested affair. Medicine Hat would bring their electric power play onto the ice twice in the period, getting majority of their scoring chances and shots in the frame. All was quiet on the scoring front with Bullion and Thompson playing their best in what could be the final game of the series.

The second period became the Logan Thompson show as the Wheat Kings goaltender robbed the Tigers of some sure goals in the period. Brandon took the only penalties in the frame putting the dangerous Tigers power play back on the ice. Medicine Hat got their chances combining for 12 shots on those power plays, but Thompson seemed to have an answer for everything they threw his way. The game remained scoreless after 40 minutes with the Tigers holding a commanding shot advantage 37-15.

The scoring started in the final period with a pressing Medicine Hat squad, looking to end the series and Brandon wanting to send the series back to Medicine Hat. Captain Clayton Kirichenko scored the game’s opening goal when Steven Owre found a streaking Kirichenko who was left alone from the blue line in and went top shelf to finally break the seal in Thompson’s armour. Moments later David Quenneville fired a point shot which found the far post and behind Thompson for a quick 2-0 lead a minute and 30 seconds into the final period. Reid Duke fired back for the Wheat Kings on a power play before Quenneville answered on another power play of his own, bulging the twine top shelf for his second of the game. Kale Clague scored on another Wheat Kings power play to cut into the Tigers lead 3-2 with under 4 minutes to play.

The Tigers would play a strong defensive game before Brandon pulled the goalie for an extra attacker. With 16 seconds left in the game and a face off in the Tigers end, Brandon was able to get one last shot off, but fortunately for Medicine Hat came just a second too slow, handing the series and the victory to the Tigers, booking their ticket to the second round.

The Tigers will have some time off and await their second round opponent which will start later in April.