TIGERS ALMOST STRIKE BACK AGAINST REBELS 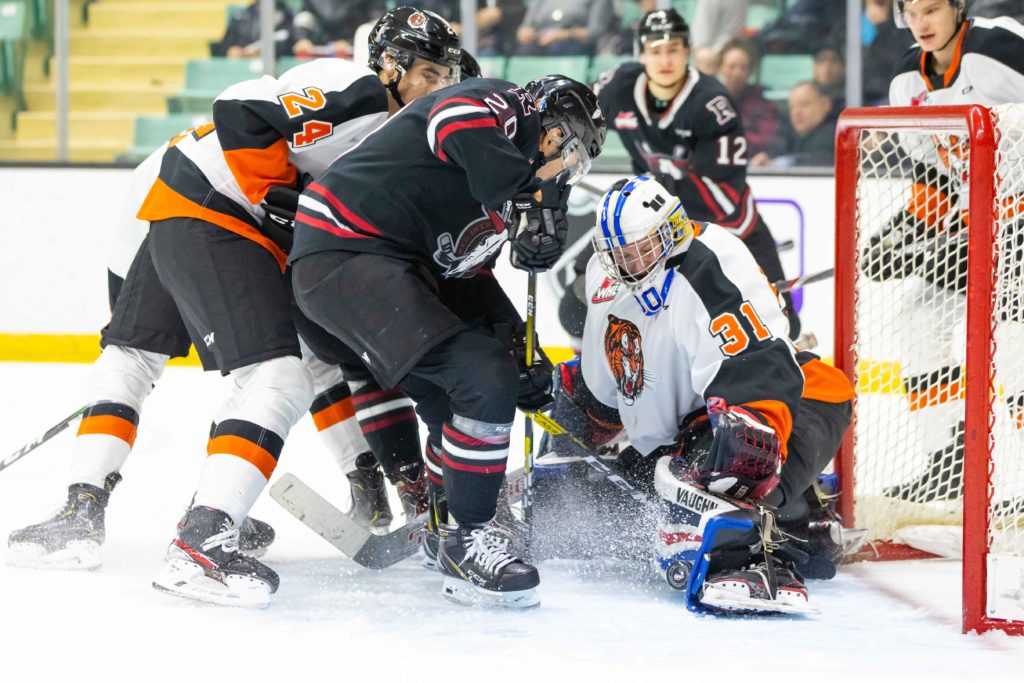 Medicine Hat, AB — The Medicine Hat Tigers had another strong third period performance but were unable to comeback from a 5-0 deficit and ended up falling 6-4 to the Red Deer Rebels on Friday night.

Affiliate goaltender Evan Fradette made his WHL debut in the contest and he stopped 19 of 24 shots faced in the game.

The Rebels’ special teams were on display as they scored two power play goals and two shorthanded goals before scoring at even strength to lead the Tigers 5-0 at the end of the second period.

Veteran forward Cameron Hausinger scored the Rebels’ first power play goal to give the home team a 1-0 lead after 20 minutes of play.

In the middle frame, Arsheep Bains scored two short handed goals before Josh Tarzwell scored on the power play. Rookie forward Jayden Grubbe scored the lone even strength goal for the home team to make it 5-0.

In the final frame, the Tigers were finally able to solve Rebels’ goaltender Byron Fancy to get on the scoresheet. Elijah Brown passed the puck to Cyle McNabb whose shot went wide but it bounced off the backboards and Bryan Lockner was there to score his eighth of the season.

After Lockner’s goal, the Orange and Black were hunger and they scored three more goals in just over ten minutes. The Tabbies’ second goal came when James Hamblin slide the puck across the crease to Corson Hopwo who did not hesitate to bury it and score his eighth goal of the season.

Just over a minute and a half later while the Tigers were on the power play, Cole Sillinger passed the puck to Brett Kemp in the Tabbies’ end, Kemp carried it up the ice and put the puck upstairs stick side to make it 5-3. Kemp’s goal was his 15th of the season.

Late in the game, Fradette went to the Tigers’ bench while the Tabbies had control in the Rebels’ end. With the extra attacker on the ice, Parker Gavlas fired the puck on net and Hamblin found it in the scramble to score his 18th goal of the season. Anderson also collected an assist on the play.

With twenty-three seconds left on the scoreboard, Brett Davis scored on the Tigers’ empty net to make it 6-4 for the Rebels and halt Medicine Hat’s comeback.

Fancy turned aside 39 of the Tabbies’ 43 shots in the contest.

The Orange and Black are now 22-9-1-0 and they will host the Edmonton Oil Kings Saturday night at the Canalta Centre for their final game before the holiday break. Fans are encouraged to bring new and unwrapped toys to the game Saturday in support of the Wawanesa Insurance Toy Drive for the Medicine Hat News Santa Claus Fund. Tickets for the game can be purchased in person at the Canalta Centre box office or online.